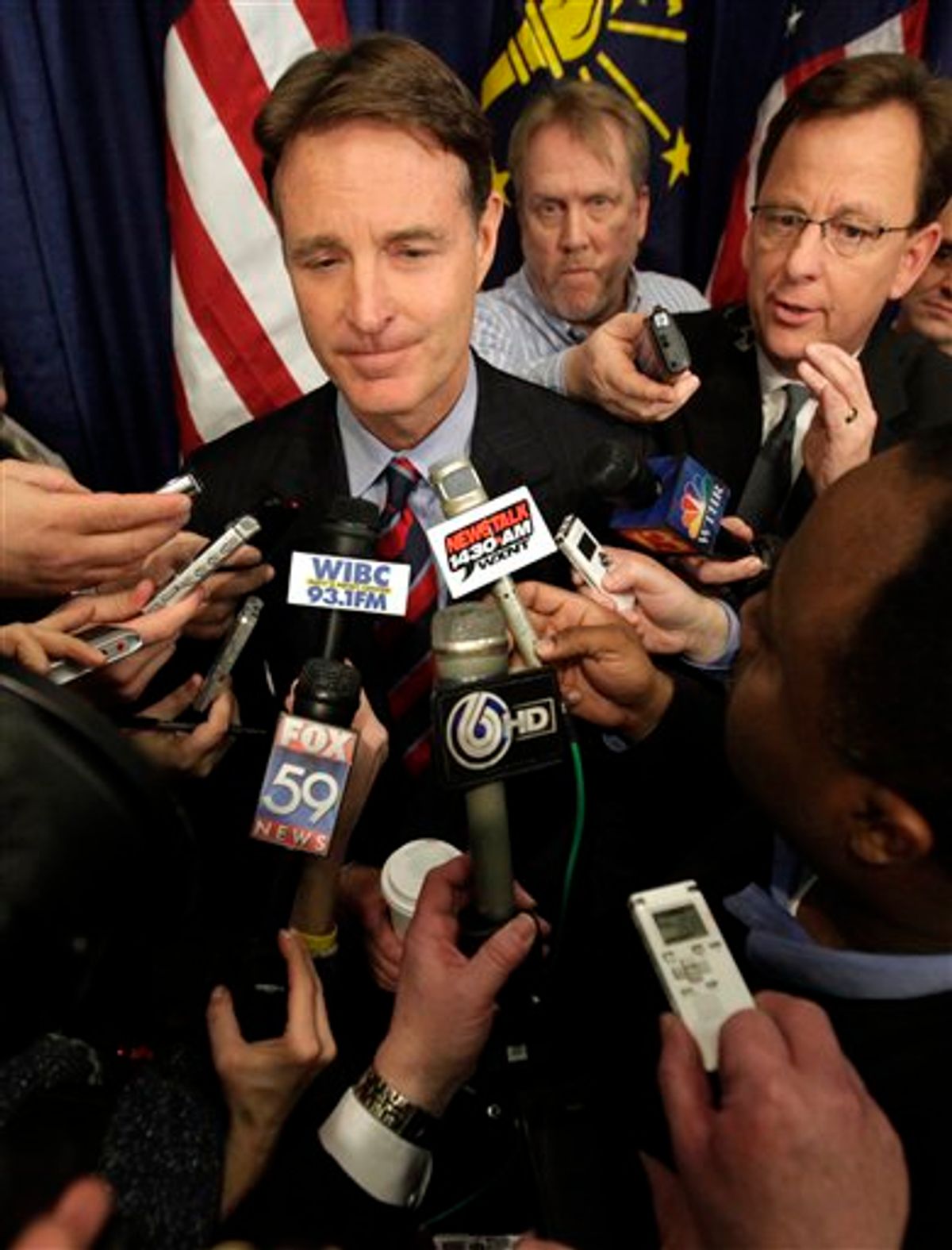 Sen. Evan Bayh, D-Ind., speaks with reporters after a news conference announcing he will not seek re-election in Indianapolis, Monday, Feb. 15, 2010. Bayh, a centrist Democrat from Indiana, announced Monday that he won't seek a third term in Congress, giving Republicans a chance to pick up a Senate seat. (AP Photo/AJ Mast) (AP)
--

Democrats have plenty of reasons to be mad at Sen. Evan Bayh, D-Ind. As he announced yesterday, he won’t be seeking reelection -- despite his huge war-chest, his lead in the polls and his apparent youth and good health. Given the current national scene, it seems like Bayh is just sticking to his usual routine: Kicking his fellow Democrats while they’re down.

In recent months, the bottom seems to have fallen out of the electoral prospects of the Democratic caucus in the Senate. Polls from across the country show Democratic challengers falling behind lackluster opponents, once-safe senators struggling and open seats that the party may not even be able to contest. The new vacancy in Indiana is just one more major headache for the already beleaguered majority.

It’s been clear for some time that Democrats would lose seats in the Senate this November. But --for all the good it's done them -- they do have a rather overwhelming majority, and it’s been widely assumed that come next year, they'd still be in control. Does the conventional wisdom need some rethinking? Pundits, at least, demand to know.

Republicans will have to pick up ten seats to gain control of the Senate. It’s a huge number. But they’ve got a huge number of targets.

First of all, there are a few gimmies: In North Dakota, the seat being vacated by Democrat Byron Dorgan is a near-automatic win for the GOP. Vice President Joe Biden’s old seat in Delaware is likely to flip as well, to Republican candidate Mike Castle, the state’s at-large representative. And if the Democrats don’t find a good candidate, Indiana is a goner too. (Rep. Brad Ellsworth, a conservative Democrat recruited for the House in the first place by Rahm Emanuel, is thinking of running. And the Nation is pushing the idea of a Sen. John Mellencamp.)

At this point, we’d better call those seats three likely losses for the Democrats.

Then there are the weak Democratic incumbents. Majority Leader Harry Reid trails his potential opponents despite their relative obscurity and his months of advertising. His only hope may be an independent Tea Party candidate draining off votes on the right. Democratic nominee Alexi Giannoulias will face a tough race in Illinois against moderate Republican Rep. Mark Kirk; to win, he’ll have to evade charges of dirty dealing around his family-owned bank -- a potent attack in a year like this.

Colorado’s appointed Sen. Michael Bennet is running a decent campaign, but faces significant opposition in both the primary and general elections, and his state is no cinch for Democrats. In Arkansas, Sen. Blanche Lincoln has been getting more vulnerable by the day. She was losing to her no-name opponents, and has recently attracted an even stronger challenger in Rep. John Boozman. Pennsylvania party-switcher Sen. Arlen Specter looks likely to survive his primary, but consistently trails Republican Pat Toomey, a former congressman -- this despite the fact that Toomey was once deemed unelectable statewide. And even if Specter were upended in his primary by challenger Rep. Joe Sestak, it’s not clear Sestak would fare any better. Finally, in California, a recent poll shows Sen. Barbara Boxer, widely presumed to be safe, barely leading all possible challengers.

If Republicans win all those seats, they're up to 50 -- one shy of the majority.

Elsewhere, a number of races are still developing. Will the GOP find a challenger for Sen. Kirsten Gillibrand, D-N.Y.? Will the otherwise strong Republican candidates in Connecticut manage to put a dent in state Attorney General Richard Blumenthal’s overwhelming lead?

Then there are the wild cards. Sen. Patty Murray, D-Wash., may still attract a strong challenge. Tuesday brought news that Sen. Frank Lautenberg, D-N.J., is in the hospital after a fall. While that seems unlikely to remove him from the Senate, he is 86 years old. Likewise, colleague Robert Byrd, D-W. Va., is 92, although West Virginia has a Democratic governor through 2012 who would appoint any replacement in the event of a vacancy.

Still, if the Republicans are counting on a clean sweep plus something happening to Byrd or Lautenberg they are, in addition to being a bit morbid, grasping at straws. Even if they did take every single one of the obviously vulnerable Democratic seats, they still wouldn't quite be all the way there, and we haven’t accounted yet for Democratic challenges. The GOP could well lose seats in Ohio, Missouri, New Hampshire, Kentucky and possibly North Carolina, Louisiana and Florida. Given that they’re running into the wind, most of those Democratic challenges will probably fail. But one or two will likely win, making the ten-seat pickup for the GOP almost a mathematical impossibility.