In my household, we love cocoa -- but my coconut pecan oatmeal cookies are nothing to mess with 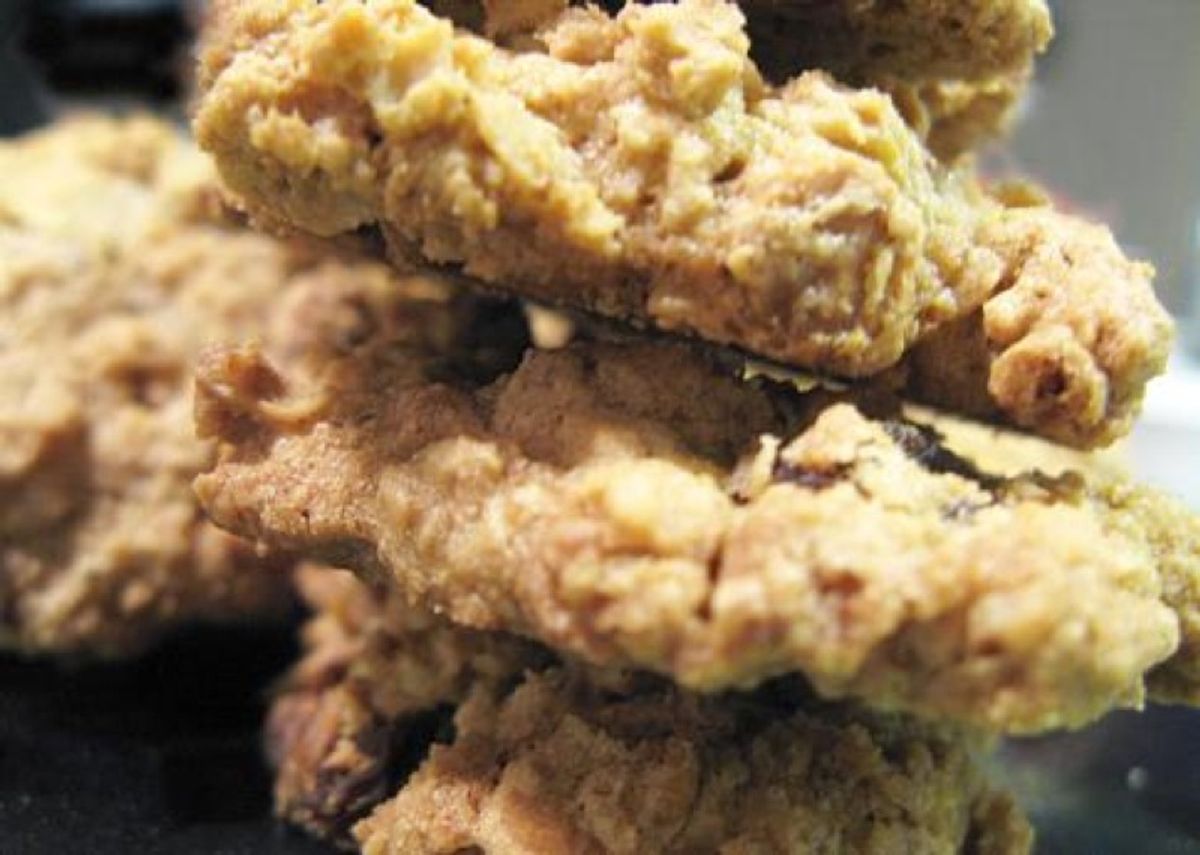 A version of this story first appeared on Luluandphoebe's Open Salon blog.

While it has been said that "Shokolad" might be my Hebrew name, it is not. To the best of my knowledge.

Opening the cupboard, you might think that someone here has an obsession with chocolate (shokolad). Jumbles of bars, bittersweet, dark, unsweetened, semisweet, all Scharffen Berger are stacked mile high. Tucked next to that is a pound (at least) of Valrhona unsweetened cocoa -- just in case the supplier runs dry. And keeping it company would be Green & Black's organic cocoa and more Scharffen Berger cocoa. You can't miss the shiny bags of chocolate chips, Ghirardelli bittersweet and more Scharffen Berger stuffed into the back seat behind the tower.

But this time, Bob's Red Mill Gluten Free Rolled Oats gets squeezed through the narrow chocolate passage. The perfume of chocolate confectionary goodness lingers long after the cupboard is shuttered. After all, while chocolate passes for a food group and the star of entire tomes, oats ought to have at least a chapter rather than just a footnote.

Oats deserve a day in the sun.

Junior high school was the first time I encountered what passed for an oatmeal cookie. They were sticky sweet, gooey and chewy and not chocolate. It was disgust at first sight. I'd sooner pass up a cookie than eat one of those beige, gnarly things.

Then, at the impressionable age of 15, I met my future mother-in-law, an oracle of the early whole foods movement. She had begun purchasing and cooking food from the co-op. A new concept, it was a compelling way to learn about real food that didn't come in a can or box. For the next year or so the horizons of food eating expanded to include homemade Mexican -- decades before there were the ubiquitous Mexican Food choices in our neighborhoods. She managed to make Asian food that didn't come from a Chun King or La Choy can. And once in a while we ate a little Middle Eastern fare with mild curries. It was an event to eat with that family.

At 17, it was my pleasure to marry into that same family where food was a daily adventure. Newly wed, we got to participate in buying from the co-op and sharing the mail-order bulk health foods from Walnut Acres. Like any good dealer, we drove around and distributed the goods from the trunk of the car. Lots of 17-year-olds were doing something similar, but few were distributing soy beans, cashews and oats.

There were always the oats. Lots and lots of oats. Not only were we eating granola by then (hey, so many oats) but wearing Birkenstocks. Our children wore baby Birkenstocks and ate lots of oatmeal. No matter how much we ate, the bottom of the oats never materialized.

I learned to make oatmeal cookies that were sometimes edible and most times only fairly good when fresh from the oven. They were still too sweet and a bit beige and gnarly. Truth be told, chocolate still won out every single time. For every batch of oatmeal cookies, or bars, there would be a corresponding batch of hearty chocolate chip cookies or brownies.

The years rolled by. The oats rolled out of favor. The co-op went the way of Whole Foods Markets. And gluten intolerance and Celiac came knocking on the door. Oats were on the forbidden foods list. Recently, though, Bob's Red Mill became the newest reliable source for gluten-free oats.

Now it seemed time to rethink that cookie. After many hopeless batches were filed into the garbage, we were about to give up hope. Too gnarly. Too beige. And boring. But not long ago, it became clear that we may have just cracked that oat. Quite by accident, a handful of toasted coconut made its way from the food processor into the oats, along with some leftover pecans, and the rest was history.

This batch makes more than 4 dozen cookies. They will last for a long time stored in a tin, and won't lose a bit of that crispy edge. These are gluten-free all the way, but they don't have to be made that way. Since I rarely remember to write this stuff down, this seemed like a good place to immortalize these oat cookies.

*Hershey's Butterscotch Chips are reported to be gluten-free. The other brand (Nestle) are not.