The battle over "retard"

Rahm Emanuel, Sarah Silverman and Rush Limbaugh caught flak for using the dreaded R-word. Is it ever OK? 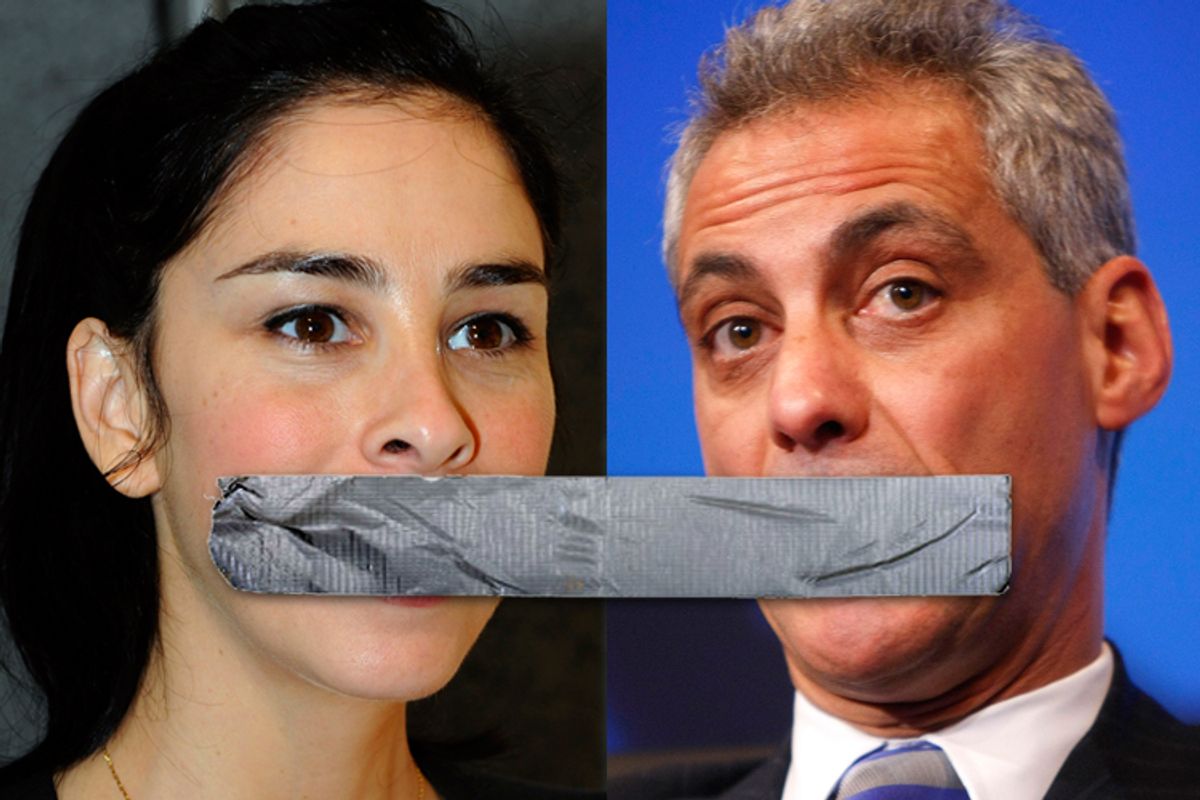 George Carlin, who knew a thing or two about linguistics, once memorably declared that there are "no bad words." There are "bad thoughts, bad intentions," he explained. "And words." Ah, would that it were that simple. As has become vividly apparent in the past few weeks, certain words have the power to provoke, outrage and inspire an astonishing amount of debate. But it's not one of those so-called seven dirty ones causing the fuss.

Were we to draw up a new list of verboten phrases du jour, surely right near the top would be "retard." First, world-class potty mouth Rahm Emanuel raised hackles earlier this month when the Wall Street Journal reported that he'd referred to a progressive group as "fucking retarded." Then Sarah Palin, whose toddler son Trig has Down syndrome, seized the opportunity to shoot off her mouth by calling for Emanuel to be fired for his "slur on all God’s children with cognitive and developmental disabilities."

But when Rush Limbaugh upped the ante by declaring "Our political correct society is acting like some giant insult's taken place by calling a bunch of people who are retards, retards ... There's going to be a retard summit at the White House," Palin unsurprisingly had no problem with Limbaugh's terminology. Instead, his fellow conservative pundit decreed it "satire," prompting Stephen Colbert to invoke satirical immunity and pronounce Palin herself a "fucking retard."

Further complicating matters, the occasionally retard-tolerant Palin again stoked the fires of controversy when Sunday's episode of "Family Guy" featured a Down syndrome character whose mother is "the former governor of Alaska." After describing the show as a "kick in the gut" on Facebook, Palin appeared on "The O'Reilly Factor" last night, reiterating that Emanuel's retarded remark was "insensitive," while Limbaugh was simply "using satire." (Best, least self-aware moment of the clip award, however, goes to O'Reilly, who described "Family Guy" creator Seth MacFarlane as "a hater" "who makes a lot of money for Fox.")

Meanwhile, this week at the TED (Technology, Education, and Design) conference, that elite annual festival of middlebrow self-congratulation, Sarah Silverman shocked a crowd whose sense of humor runs more toward cryptic New Yorker cartoons by dropping several R bombs of her own. Distinguishing herself from the feel-good rah-rahism of typical TED speakers, Silverman instead did a routine featuring her desire to adopt a special needs child. "The only problem with adopting a retarded child is that the retarded child, when you are 80 is, well, still retarded," she reportedly said, adding that her solution was going to be to adopt a terminally ill retarded kid. That stuff may kill at Zanies Comedy Club, but it's less popular among people hoping for African fractals.

TED organizer Chris Anderson soon moaned via Twitter that he found Silverman "god-awful," ultimately posting on his blog that he wished Silverman well, but "I still think humor about terminally-ill 'retarded' kids is an acquired taste. And not a taste I personally want to acquire."

The "retard" revival isn't new, of course -- Lynn Harris chronicled it here back in 2008, fresh on the heels of the word's contentious use in "Tropic Thunder." Frankly, I found the movie's "retard" storyline hilarious. It wasn't a dis on the mentally challenged; it was a viciously dead-on parody of Hollywood's misguided ennobling of them, and actors' narcissistic, Oscar-baiting pursuit of those Forrest Gumpy roles. When Robert Downey Jr.'s character, a guy so aggressively clueless he's in blackface, for god's sake, talks about going "the full retard," the joke is on him.

While I generally try to err on the side of sensitivity (and often fall impressively flat), I also don't get my own knickers in a twist when I hear an occasional "retard" among friends. I don't want to give any word that much power. On the spectrum of outrage, surely most of us can distinguish between using an inappropriate term for someone who truly does have his or her full faculties and building an entire comedy routine around taking potshots at the disabled. There's a difference.

However one may feel about Rahm's, Rush's and Colbert's use of the word "retard," at least they all applied it to someone dumb, rather than someone disabled. Silverman and "Family Guy," in contrast, built their material on the apparent hilarity of the mentally challenged -- or in a cheap send-up of "political correctness," if that's how they prefer to view it. But the material smacks of artless cruelty. That's why it's offensive, because it's the same comedically lazy, "Look at me! I'm so transgressive! Can you handle it?" routine they've both been hiding behind since the freakin' '90s.

It's easy to be offensive. It's easy to make people uncomfortable. And it's petty and mean to get laughs at the expense of people who actually are laughed at and teased all the time, and then pass it off as edgy social commentary. ("South Park" making fun of Scientology? Now that is funny.)

As for Sarah Palin, it's hypocrisy for her to chastise Rahm Emanuel while tolerating Rush Limbaugh, but her anger at the "Family Guy" episode -- one in which the word "retard" is not, in fact, uttered -- seems pretty damn justified. No matter how frequently awful Palin is or how often she herself uses her youngest kid as a political prop, it doesn’t make it any less loathsome for anybody else to pick on the handicapped. It also, significantly, doesn't make it funny. So I don't mind if Stephen Colbert brands someone as a "retard." I can't even raise much of an eyebrow when Rush Limbaugh does it. But when entertainers make dumb jokes about people living with Down syndrome, mocking those with learning and developmental disabilities for some envelope-pushing shock value? That's just lame and weak. You might even say it's retarded.