Great Scotties! A look back at a feisty, regal dog 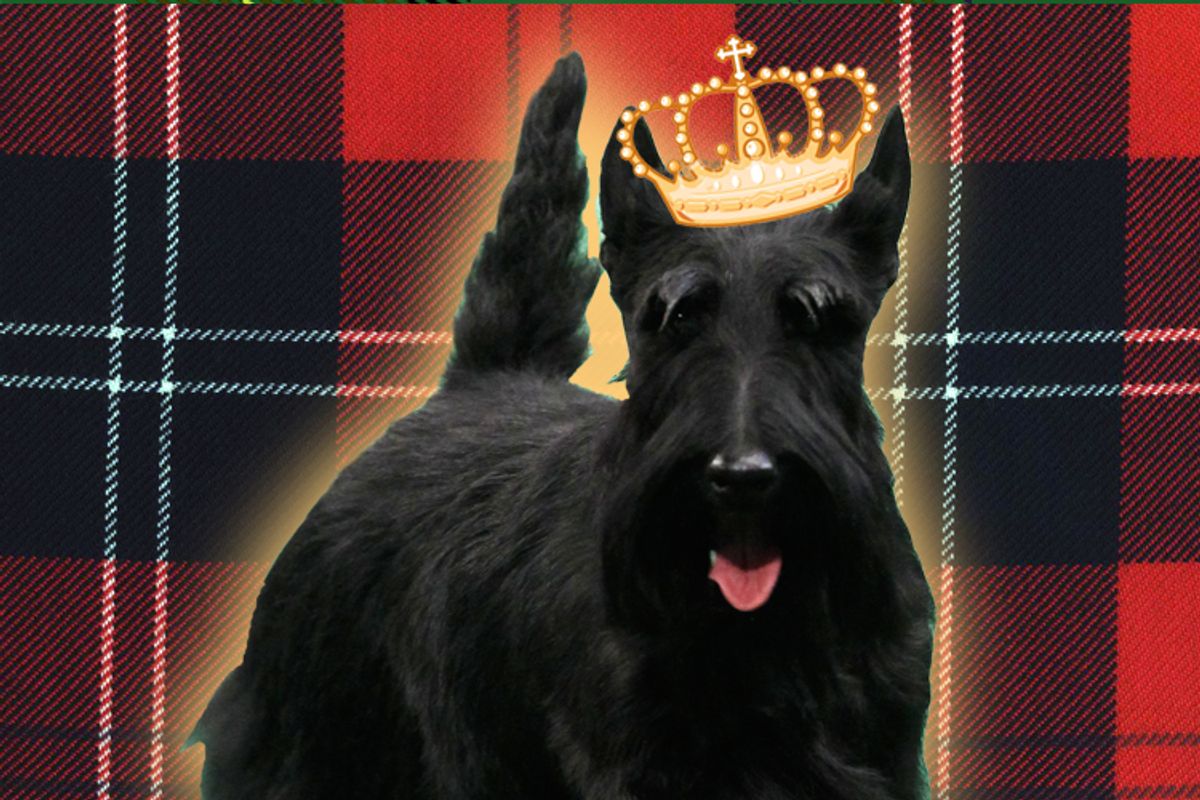 Though Sadie the Scottie's Best in Show victory at Westminster on Tuesday night didn't come as a surprise, the terrier's win nevertheless represented a triumph for her feisty, mustachioed breed (and a sweet comeback after her potentially career-killing move of peeing on the floor last year). It was the first Scottie Westminster win since 1995, earning Sadie a place in her ridiculously cute breed's hall of fame. Not even a brief outburst from PETA interlopers can dampen the milk bone sweetness of the moment. So today, in honor of Sadie, we bring you a few of the other Scottie greats.

What's the dog of choice for a woman who would eventually have an entire era named after her? Queen Victoria and her family owned several pets but were especially devoted to their Scottie Laddie.

Perhaps the least fear-inspiring emblem in college history, "Scotty" was officially named Carnegie Mellon's mascot in 2007. The university, however, maintains that the image of a little dog in a kilt "says tuff."

If you're going to fracture your spine, at least there's a cuddly name for it. In X-rays of the condition Spondylosis, the outline of a Scotty dog can be seen, thus its nickname "the scotty dog fracture."

The most viciously fought over game piece on the Monopoly board, the Scottie is the Donald Trump of Boardwalk. Thimble gets a sad little house on Baltic.

What other dog makes for the world's most delicious cookie? Whether shortbread originated in Scotland is disputable, but the nation's pride manifests itself in buttery, canine-shaped treats. See also: licorice.

The most recent in a long line of presidential Scotties (more of the breed have occupied the White House than any other dog), the Bushes' Barney and Miss Beazley enjoyed fetching sticks, digging holes and bankrupting the treasury.

Shortly after having to put down her 16-year-old Scottie, Lena, in 2008, actress Tatum O'Neal was arrested in New York for purchasing crack cocaine. Her excuse? Dog grief. She told the New York Post, "There's no excuse for what I did. I lost my Scottish terrier, Lena. That seemed to set me off."

You know who didn't like Scotties? Hitler. His lady friend Eva Braun owned two, named Negus and Stasi. In a vintage clip of Hitler and pals kicking back in the 1973 documentary "Swastika," Eva can be seen chiding her pet, "Stasi, don’t disturb your Führer."

Perhaps the famous Scottie in history, Franklin Roosevelt's Fala was a constant fixture in the public eye during his lifetime. Think going after a politician's inner circle is anything new? Fala was immortalized in a legendary FDR speech: "These Republican leaders have not been content with attacks on me, or my wife, or on my sons. No, not content with that, they now include my little dog, Fala. Well, of course, I don't resent attacks, and my family doesn't resent attacks -- but Fala does resent them." Today, a bronze Fala sits near his master at Washington, D.C.'s Roosevelt memorial -- the only presidential dog to hold that honor.