At CPAC today: A checklist of crazy 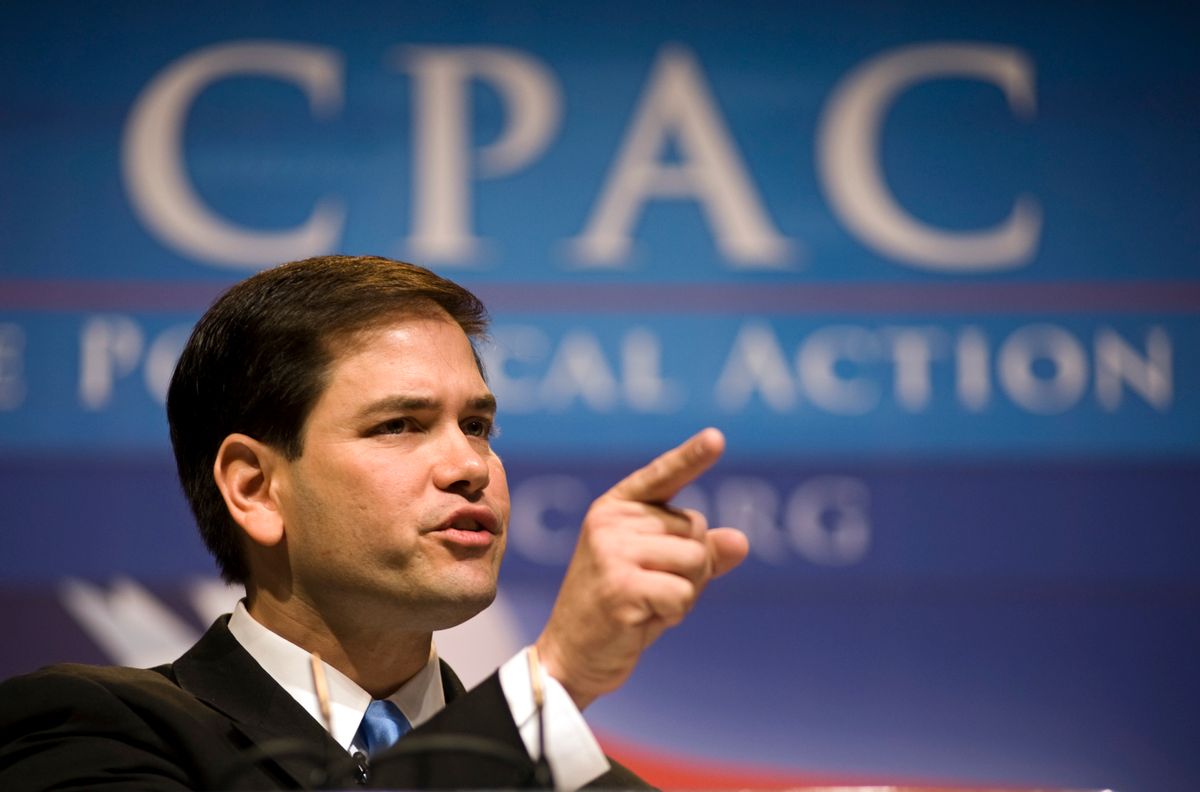 Today's a magical day, and it comes but once a year. At the Marriott Wardman Park Hotel in Washington, right-wingers of all stripes are getting together for CPAC 2010. The conference, thrown annually by the American Conservative Union, is notable less for its spirit of probing debate than for the massive resupply of fodder it gives left-of-center journalists every year. God bless us, every one!

But it's only when you look beyond the headliners that CPAC starts to get fun.

For instance, look for a woman named Leslie Sanchez at the opening ceremonies. A GOP operative, Sanchez argues that "Republicans’ intolerance on immigration could wreck the party’s governing majority." This would be bold and provocative, except that she’s been assigned the job of emceeing. So expect some high-grade tokenism here.

Following in this vein, you may want to tune in to the 11 a.m. panel, called "The Rise of Latino Conservatism." Speakers include "Grover Norquist, Karyme Lozano, Eduardo Verastegui, Alfonso Aguilar, and Governor Luis Fortuno (invited)." What's the matter, couldn’t get an RSVP from the governor of Puerto Rico?

Skipping ahead to 1 p.m., we’ve got an hour-long talk being delivered by a Dr. Thomas DiLorenzo. Title: "Friend or Foe? Abraham Lincoln on Liberty." DiLorenzo is a libertarian economist who’s devoted the better part of his career to attacking Lincoln. His publications include "The Real Lincoln: A New Look at Abraham Lincoln, His Agenda, and an Unnecessary War," and "Lincoln Unmasked: What You're Not Supposed to Know About Dishonest Abe."

Now, let’s be clear. DiLorenzo doesn’t think slavery was cool, and I’m sure he’d resent any implication otherwise. But even less cool than slavery was the leviathan federal government created in the process of crushing the Confederacy and abolishing human bondage. Couldn’t the slaves have just taken one for the team for a little longer?

According to DiLorenzo, Lincoln demonstrated "sociopathological behavior" in the Civil War, by "micromanag[ing] the murder of 350,000 citizens." It wasn’t even because he cared about slavery. No, he was just a godless heathen: "Lincoln even wrote a book that argued that the Bible was not the word of God and that Jesus was not the son of God. When he decided to get into politics, the book was burned."

After that comes Tom Woods at 2 p.m., on this topic: "When All Else Fails: Nullification & State Resistance to Federal Tyranny." If you’ve forgotten your 9th-grade history, nullification is the doctrine propounded by former South Carolina Sen. John C. Calhoun -- one of slavery’s greatest theorists -- that South Carolina had a right to "nullify" offending federal legislation. This is the historical origin of the use of "states’ rights" arguments by conservatives to defend white supremacy. And we don’t exactly need to strain to make this connection: Woods puts it right there in the title.

There won’t be much time for a break after Woods’ talk, because at 2:15 the panel called "They Want Us to Shut Up" kicks off. Notable panelists here include former Rep. J.D. Hayworth, R-Ariz., who’s challenging Sen. John McCain in a Senate primary, and an inspirational speaker and writer named Doug Giles.

It was Giles who once subtly referred to Rodney King’s famous query -- "Can’t we all just get along?" -- as "Rodney King's dream of 'us all just gettin’ along.'" Catch that? Also, he did it in a column about how President Obama had wronged the white race.

Most recently, he’s the author of "If You’re Traveling Through Hell, Keep Going," a guide for the "heaven-bound." Giles looks like a guy who’s maybe a touch obsessed with preserving gender norms. His other books include "Raising Boys Feminists Will Hate," and "How to Keep Jackasses Away From Daddy’s Girl." If you haven't gotten the point yet, here’s how he opened a column at TownHall.com in December:

I’m a rabid heterosexual. There, I said it. I’m outing myself. I know it's not cool in this gay day to like the opposite sex. And I’m sure there will be those reflexively irate gays who will call me latent. As far as I can tell, however, I'm straight and wholeheartedly love the fact that God blessed us boys with girls. Yep, good job with the girlies, God, and muchas gracias, Señor Yahweh, for creating the chicas bonitas. In the immortal words of Borat, "I like. Very nice." Call me weird.

As far as I am concerned, the lovely lady lumps, in all their shapes and sizes, trump a dude any old day. Yep, I guess I didn’t get the "gay gene." (By the way, the only gay genes that I know of are the ones Versace makes.)

So … don’t ever look for me to switch teams, as I am completely and giddily content -- yea, even prideful -- about my heterosexuality.

And to think, I was about to recommend CPAC as a prime cruising location.

Of course, it’s not fair to assume that everyone attending a conference thinks the same things. When people like Huckabee or Boehner speak, they obviously aren’t going to talk like the folks they follow onstage. But it’s worth remembering exactly who got invited to talk at CPAC the next time you hear a conservative get huffy about how the tea parties have nothing to do with race, or how opposition to gay marriage really isn’t about homophobia at all.