Racist "Justice" is dead, but not gone 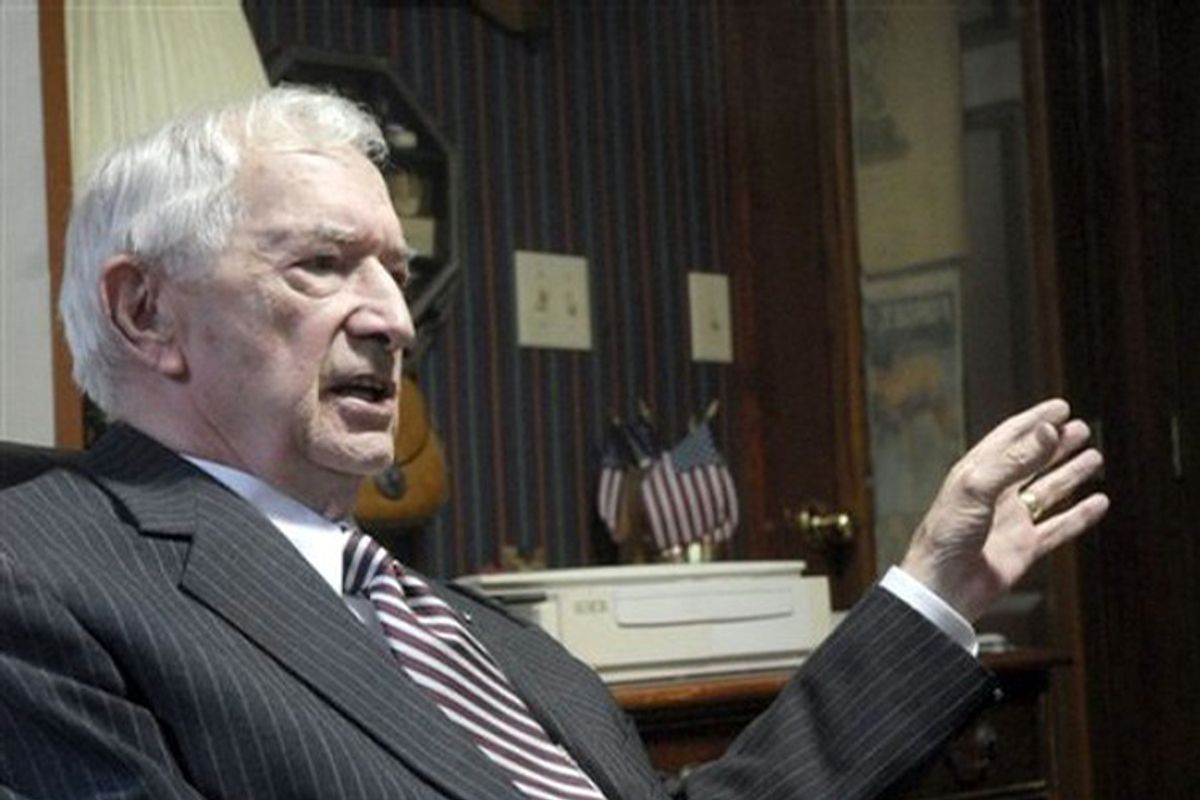 It's customary to describe the death of a figure like Arkansas' "Justice Jim" Johnson as the end of an era. Riddled with cancer, the 85-year-old segregationist killed himself with a deer rifle at the Conway home he called "Whitehaven" -- the name his way of telling critics of his racial views, he once told an interviewer, that they could "kiss my ass."

People who have underestimated the legacy of Justice Jim and like-minded rabble-rousers, as the Obama administration appears to have done, however, could end up paying a terrible price.

The one-time state Supreme Court judge was basically the George Wallace of Arkansas: a die-hard segregationist demagogue with a far less successful political career than his Alabama soulmate. Having lost two races for Arkansas governor, Johnson's last hurrah as a candidate came when he was defeated by Sen. J. William Fulbright in a 1968 U.S. Senate primary.

Since then, nobody espousing anything like Justice Jim's views -- he sometimes refused to shake black voters' hands, railed against "mongrelization" and was once endorsed by the KKK -- has stood any chance in an Arkansas election. In that sense, he died an embittered anachronism, a throwback to "massive resistance," White Citizen's Councils, "colored" drinking fountains, billboards along Southern highways depicting "Martin Luther King at a communist training school" and state police investigations of "race-mixers" and other subversives.

In a broader sense, however, Justice Jim was an innovator. His methods and tactics were as contemporary as Rush Limbaugh, NewsBusters, the Tea Party and the Fox News stylings of Glenn Beck: an insidious but heady blend of half-truth, disinformation, conspiracy-mongering and appeals to ignorance.

But because the primary target of Johnson's ire was President Bill Clinton, many in the so-called "mainstream" media and among progressive Democrats imagined that the target somehow deserved it; also that the kinds of coarse smears used against Clinton couldn't possibly harm so august and transcendent a figure as President Obama. Now they're struggling to catch up.

Reading accounts of Tea Party patriots oiling their guns for the coming counter-revolution can't help but remind Southerners of the 1950s and early 1960s, when demagogues like Justice Jim stoked fears of federal tyranny. Years later, he claimed to have hoaxed Arkansas Gov. Orval Faubus into calling out the National Guard, supposedly to control white mobs determined to prevent the 1957 integration of Little Rock Central High -- the shameful event seared into the memory of every Arkansan of Bill Clinton's generation.

"There wasn't any caravan," he told Faubus biographer Roy Reed. "But we made Orval believe it. We said. 'They're lining up. They're coming in droves.' ... The only weapon we had was to leave the impression that the sky was going to fall." Somewhat later, Johnson said Faubus asked him to raise a mob to justify his actions. As neither man could be believed, there's just no telling.

Justice Jim's hatred for Clinton dated to that 1968 campaign, when the future president served as Sen. Fulbright's driver. Confronting Johnson after a speech, the recent Georgetown graduate blurted, "You make me ashamed to be from Arkansas."

Well, he made a lot of people feel that way. Years later, however, Johnson got him back, telling a conservative Washington gathering that he was ashamed Arkansas had produced, "a president of the United States who is a queer-mongering, whore-hopping adulterer; a baby-killing, draft-dodging, dope-tolerating, lying, two-faced, treasonous activist."

More to the point, Johnson helped orchestrate a multimedia smear campaign: appearing in Jerry Falwell's crackpot video "The Clinton Chronicles" depicting the president as a drug smuggler and murderer, as a paid consultant to the American Spectator's notorious "Arkansas Project," writing characteristically dishonest op-eds for the Washington Times and Wall Street Journal, even helping to broker convicted embezzler and Whitewater fabulator David Hale's relationship with gullible reporters for the New York Times -- his own political allegiances carefully airbrushed out of the picture.

Clinton's sin was being a race traitor, an apostate white Southerner; Barack Obama's that he's the Other, the living embodiment of "mongrelization" men like Justice Jim Johnson feared and loathed. Given that history, it's just astonishing that the Obama White House appears never to have seen the hysteria coming.