A Singapore fling (with street food)

At the city-state's hawker centers, the heat is suffocating -- but the eating options are endless 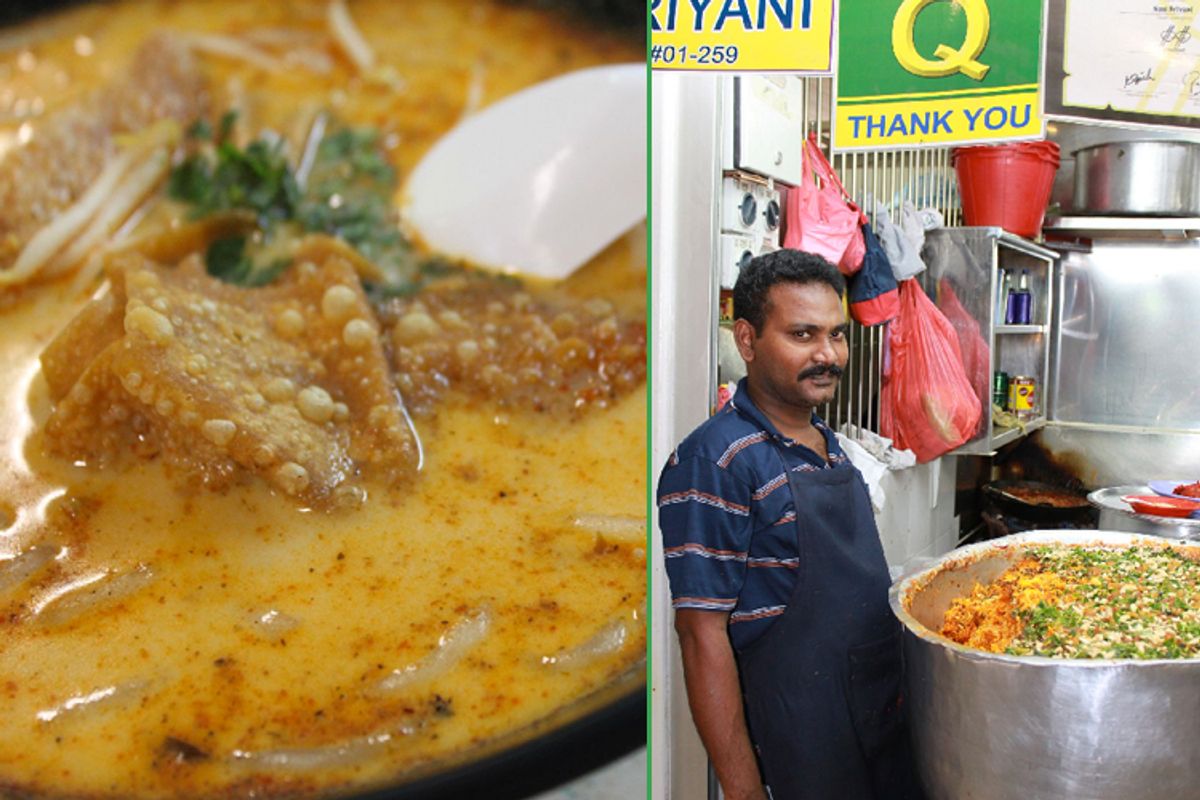 I have to start by telling you that it is very hot in Singapore. You don't so much walk as swim through the humidity. I'm not sure it's physically possible to be comfortable in this kind of heat, but even still, at all hours, locals are face-deep in bowls of hot food -- soups, stir-fried noodles, spicy lamb curry. This is a city wholly obsessed with eating, people who treat meals with reverence and snacks with joy. They will, with no prompting, tell you exactly where to find their favorite soup, will watch you put condiments on your noodles and not hesitate to tell you that you are doing it all wrong. A local food writer, KF Seetoh, is a major cultural star, and top-rated restaurants in his guide, "Makansutra,"

are marked by the phrase, "Die die must try," which he translates as something along the lines of "You have to eat there even if it kills you." Singapore is my kind of town.

So, after hearing countless food stories from my wife when she travels there for work, I finally went myself, heeding her advice for the best stops and one critical fashion note -- to wear a headband to catch my sweat before it drips into my bowl.

One afternoon, I waited out the hottest part of the day nursing an iced coffee (which stays iced for about five minutes, but the mixture of strong coffee and sweetened condensed milk is still refreshing lukewarm). I sat, my belly full beyond reasonable limit, at a table in a hawker center, where Singapore consolidates its street food vendors into what are essentially giant food courts. Two women approached, both wearing traditional abayas and hijabs, and sat at my table. We had apparently little in common, and yet we began chatting over their giant bowl of sayur lodeh -- vegetables and tender puffs of tofu afloat a coconut-milk curry, which, on first whiff, I wished I'd gotten for myself. The women were in their mid-forties, but with unlined, girlish faces. Both Muslim, one grew up in Pakistan; her friend was ethnically Chinese. They were amused to learn that I come to Singapore only to eat everyday street food.

Though Singapore has plenty of brick-and-mortar restaurants, it's the 27 hawker centers that thrill me: Open-air multilayered structures that resemble nothing so much as parking garages, they are crammed with vendors, each selling one or two items, the panoply of options a direct reflection of the cultural fabric of Singapore -- Indian, Malay, Chinese. From Indian-evolved flatbreads called roti served with curries to southern Chinese-style poached chicken with ginger and scallion sauce, these foods have an immediacy and a democratic nature. It's fine eating without fine restaurants, affordable, resourceful and quick, and laid out for all to see -- the ultimate fast food. On my first morning in Singapore, I inadvertently held up the lunchtime crowd, the subject of my fascination a young man whirling roti dough until it achieved its signature gossamer translucency. "It's all in the wrists," I thought as I watched him, wondering how many days -- years -- you'd have to make roti before you got the hang of it.

Famously noted by Calvin Trillin in the New Yorker, Singapore has no shortage of national dishes. There's laksa, a sweet, spicy coconut-milk soup full of rice noodles and seafood that has been traced back to Peranakan culture (descendants of 15th and 16th century Chinese immigrants to Malaysia, Indonesia and Singapore). There's carrot cake, which has nothing to do with American carrot cake, but is made of mild daikon radishes, which would look like carrots if carrots were ghost-white and the size of your forearm. Made into savory cakes, hawkers stir-fry them with eggs, onions and garlic, available white or black with soy sauce.

Tell a Singaporean that you've tried one version, and they will assure you that the other is better, more authentic. There are curry puffs, flaky pastry half-moons filled with spiced beef and hard-cooked eggs that taste not unlike Indian samosas and then there is Hainanese chicken rice, a dish that looks humble until you realize that the birds have been poached in the richest, most savory broth, always succulent, and the rice is cooked in that same stock, enriched with chicken fat. Four days of steady eating, like I recently spent, is hardly enough time to scratch the surface -- four months might give you a decent shot, but even, I suspect, four years would still leave countless stones unturned.

As the two friends at my table got to eating, we got to talking. They were pleased with the sayur lodeh, but they couldn't resist pointing out some of the other vendors of note. "Have you tried the roti?" they wondered. The Pakistani woman insisted I order the lamb biryani -- the hawker selling it was dwarfed by a comically massive pot filled with lamb and spice-scented rice. Not wanting to miss anything, I made notes of their favorites, because I'm a geek like that. But after I'd made it pretty obvious that I thought they had a pretty good thing going with these hawker centres, they insisted on loading up a plate for me, and watched expectantly as I ate -- they didn't want me to miss anything, either. The tofu in the curry I regretted not ordering for myself had acted like a sponge, soaking up the chile-laced coconut broth, releasing it in waves as I chewed. The cabbage had gone soft, the rice suffused with flavor, a catch pan for the goodness. I couldn't eat anymore, and then I had a few more bites.

They asked me where I lived, and when I told them California, one of the women's eyes lit up. "California! I've been there once," she said. The 17-hour flight now seemed almost insignificant. I asked her where she'd visited, expecting her to say Los Angeles.

"Did you like it?" I wondered aloud, but she'd already started shaking her head no before I finished the question. "The food was terrible."

Here are some of my favorite Singapore hawker centres:

Unsurprisingly, many of the vendors here cook Chinese dishes, from rice porridge to clay pot chicken rice. Though there are few tourists, most of the vendor signs and menus are written in English (though English is Singapore’s national language, this is not always the case in hawker centres), making ordering relatively easy.

The Thai community of Singapore gathers at Golden Mile, which has the largest number of Thai vendors. Find one of the vendors selling banana fritters (pisang goreng).

This recently renovated centre is housed in a new two-story building that was modeled after traditional Malay architecture. This is where I met the women who shared their meal with me—if you go, try the sayur lodeh.

Mercifully less touristed then the often-recommended Newton Food Centre (which is often touted by the Singapore Tourism Board), Maxwell Road has the same assortment of vendors but a nice mix of locals eating alongside visitors. Most notably, it’s also home to Tian Tian Hainanese Chicken Rice (stall 10), a premier spot to sample what may well be Singapore’s national dish.

This hawker centre benefits from its setting, directly on the esplanade in view of the water. All of the vendors here have been hand-picked by Makansutra, so you can find all of the classic Singaporean dishes here, from Hokkien noodles to Hainanese chicken.

As befits a market located in the heart of Singapore’s Little India, the best here vendors are those serving Indian dishes—roti, biryani and dosa. The wet market on the first floor— with its butchers, fishmongers and fruit and vegetable vendors—is an olfactory experience, but haa some of the best looking and most unusual ingredients.