A guide to the CPAC straw poll

GOP strategists play down the conference's vote, but would-be 2012 candidates stand to gain -- or lose -- even so 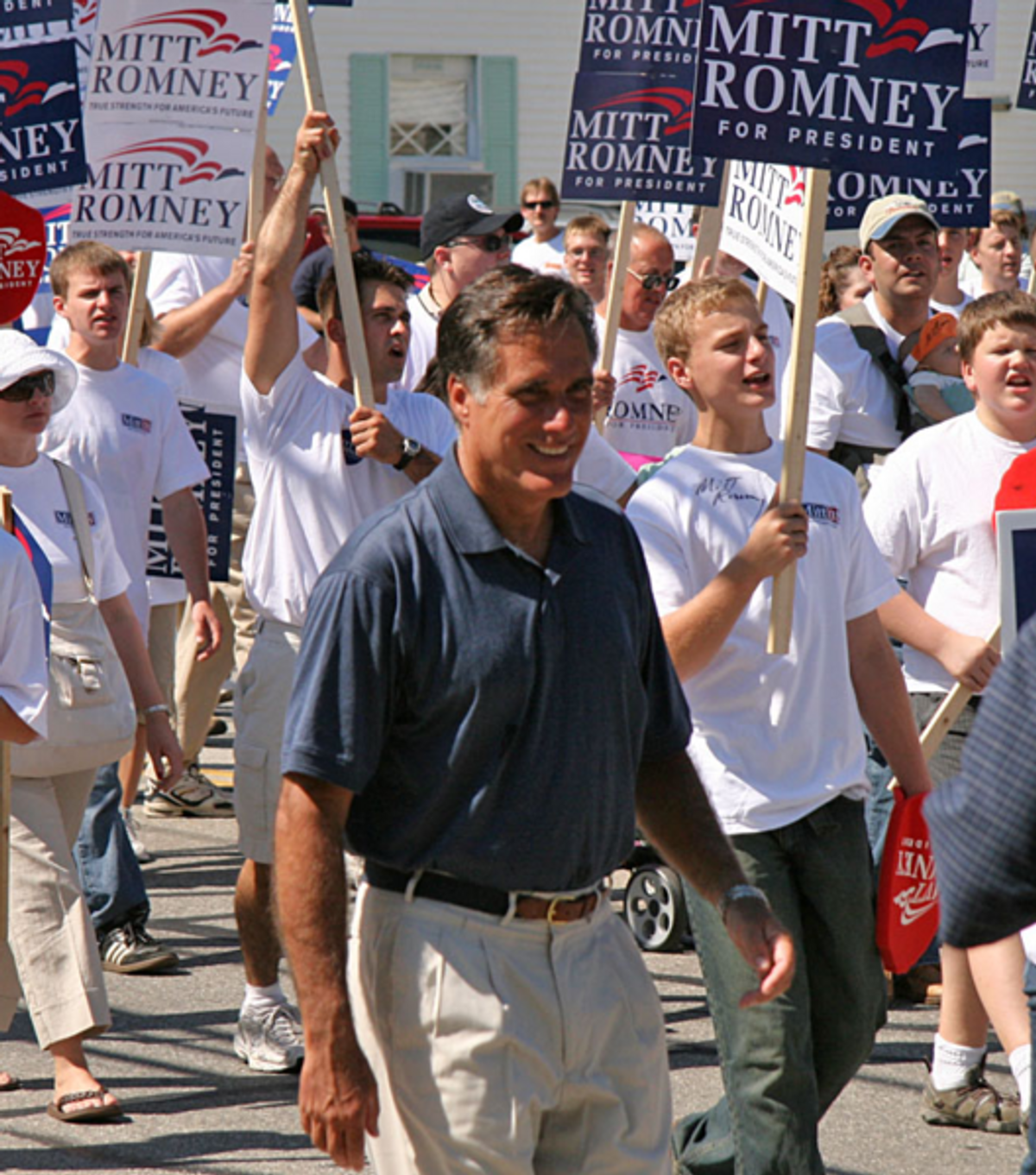 If the CPAC straw poll was much use as a predictor, we'd all still be looking back on the 2008 election between George Allen and Hillary Clinton. Four years ago, at CPAC 2006, that was who the poll found voters were expecting the two major parties to nominate; Barack Obama wasn't even one of the choices CPAC participants had to pick from on the Democratic side.

But that 2006 straw poll was also the last one Mitt Romney didn't win, which is why -- even though allies of most of the Republicans who might want to run for president in 2012 say the results aren't that big a deal -- people will be watching to see how he fares this time around. The winner will be announced by GOP pollster Tony Fabrizio just before Glenn Beck's closing speech Saturday night, and the hordes of press covering the conference are sure to give plenty of attention to the results. Many Republican operatives aren't sure how much any of it matters. "Winning a straw poll two years before Iowa, New Hampshire and the rest is the equivalent of being homecoming queen in high school," said one Republican pollster. "It's pretty neat and means you are popular right then, but it doesn't mean anything for the rest of your life." But in the wild world of early jockeying for a presidential nomination, any little bit of momentum counts for something.

So here's Salon's look at what's at stake for the people on the ballot, and who's likely to be pleased -- or not so pleased -- with the outcome.

Mitt Romney Many people involved in GOP politics expect Romney to win his fourth consecutive straw poll. Which actually could put the 2008 runner-up for the GOP nomination in a bit of a tough spot Saturday night: Win, and you haven't done anything surprising ("This is his kind of deal," says a strategist for one of Romney's 2008 rivals); lose, and it's a big upset. Even Romney sympathizers aren't putting too much stock in the outcome: "The CPAC straw poll, like most straw polls, isn't a conclusion but rather an indicator," said one GOP strategist allied with him. "It measures organization and gauges your level of enthusiasm or support among base voters." Some people working for potential Romney rivals are hinting that his organization is the only one that has the cash to actually put any resources into trying to win the straw poll -- which is true -- but at the same time, no one has any actual evidence that Romney is, in fact, working that hard at it. The demographics of who votes work in his favor: in previous straw polls, the turnout has been overwhelmingly made up of the college kids or recent graduates who flock to CPAC to mingle with other young conservatives, and many of these Alex P. Keaton-types seem to like front-runners. Chances are he wins again.

Sarah Palin Palin actually won a pre-straw poll straw poll of GOP strategists conducted by the Hotline before CPAC started. The former Alaska governor-turned-tea partier was projected to edge Romney out narrowly by the people the Hotline contacted. But showing up counts for quite a bit at events like this. Romney drew a packed house Thursday afternoon for a speech full of red meat; some young CPAC attendees walked straight out of the hall when he finished to the straw poll voting tables near the doors. Palin skipped the event altogether, heading to the somewhat discredited Tea Party Nation confab in Nashville a couple weeks ago instead. Plus, it's still not entirely clear that she's even planning to run for president in the first place. If Palin does win, it'll be a pretty clear statement of her ability to draw support from the base on sheer popularity. If she doesn't do so well, the chatter among GOP operatives wondering whether she'll ever be able to put together an actual organization -- and whether she's paying much attention to the strategic implications of doing things like skipping CPAC -- will probably get louder.

Tim Pawlenty Unlike Palin, Pawlenty is sending some pretty clear signals that he probably is running for president. And unlike Palin, Pawlenty will actually be at CPAC, giving a speech Friday before heading off to the National Governors Association meeting in downtown Washington. Pawlenty's camp says his chief goal at CPAC is just to continue the slow process of introducing himself to activists and building awareness (beyond Minnesota, where he's been governor for seven years) of who he is and what he's all about. Which is not very veiled code for trying to keep expectations low. Pawlenty isn't likely to win the straw poll, but a strong finish would give him some buzz -- which hasn't come that easily for him this early in the 2012 game. He may have the most to gain from the straw poll, and with a large field, he doesn't have much to lose if he winds up back in the pack, either.

Mike Pence The chairman of the House Republican Conference opted not to run for Senate in Indiana this year, even staying out of the race after incumbent Democrat Evan Bayh bowed out. Which may mean Pence plans to ride his conservative bona fides into the 2012 GOP presidential race. He'll speak Friday. His CPAC speech last year looked ahead, with some prescience, to rising conservative anger at President Obama. Pence, who doesn't have anything close to a formal presidential organization yet, could wind up doing pretty well nonetheless -- he's a former conservative talk radio host, and he's very good at riling up a crowd. That might help him stand out from the field if he does decide to run. "It's a small, select audience, but having said that, it is an influential audience," one GOP House aide says of the straw poll voters.

Newt Gingrich The man who led the GOP to power in the 1990s clearly dreams, on at least some level, of doing it all over again nearly 20 years later -- only this time, from the White House. He's lobbying for a new tea party-approved "Contract From America," modeled on the original "Contract With America" that Gingrich's revolutionaries rode in 1994. But he may have alienated the hardcore conservative base by backing establishment GOP candidate Dede Scozzafava in a special election in New York's 23rd Congressional District last fall (calling activists' support for the tea party favorite "a mistake), and it's not entirely clear how much appeal he'll have to voters. In past straw polls, between 60 and 80 percent of the ballots have been cast by people between 18 and 25 years old. That means many of them weren't even born when Gingrich left the House in disgrace in 1998 -- generationally speaking, Newt winning this straw poll would be like Bill Bradley winning one at Netroots Nation. UPDATE: As several readers have pointed out, it's only been 12 years since 1998, not 22. Apparently my desire for a Bill Bradley line trumped my ability to do math.

Mike Huckabee Huckabee isn't coming to CPAC, and he doesn't really look serious, at least now, about running for president again. He's happily ensconced at Fox News, and his daughter and close political advisor Sarah Huckabee just took a job for Rep. John Boozman's Arkansas Senate campaign. But if there's one thing the 2008 primaries showed, it's that Huckabee really doesn't like Mitt Romney, which could still lure him back into the field in the end. Allies say they're not expecting him to make much noise in the straw poll. For Huckabee, anything other than a Romney win would probably be fine.

The Rest of the Field You can't say CPAC doesn't give its voters a wide selection to choose from -- there are no fewer than 11 names on the straw poll ballot. The others are: Indiana Gov. Mitch Daniels; Texas Rep. Ron Paul; former Pennsylvania Sen. Rick Santorum; Mississippi Gov. Haley Barbour; and South Dakota Sen. John Thune.

Write-Ins If Florida Senate candidate Marco Rubio had ended his keynote speech at CPAC Thursday morning by declaring his intention to run for president in 2012, the crowd might have carried him out of the room on their shoulders. Don't be at all surprised if he gets some write-in votes. For that matter, don't be surprised if Dick Cheney does, either. After all, someone out there is actually organizing an effort to get him some.