Plunging head-first down a sliding track at 85 mph looks dangerous, but skeleton fans defend its safety 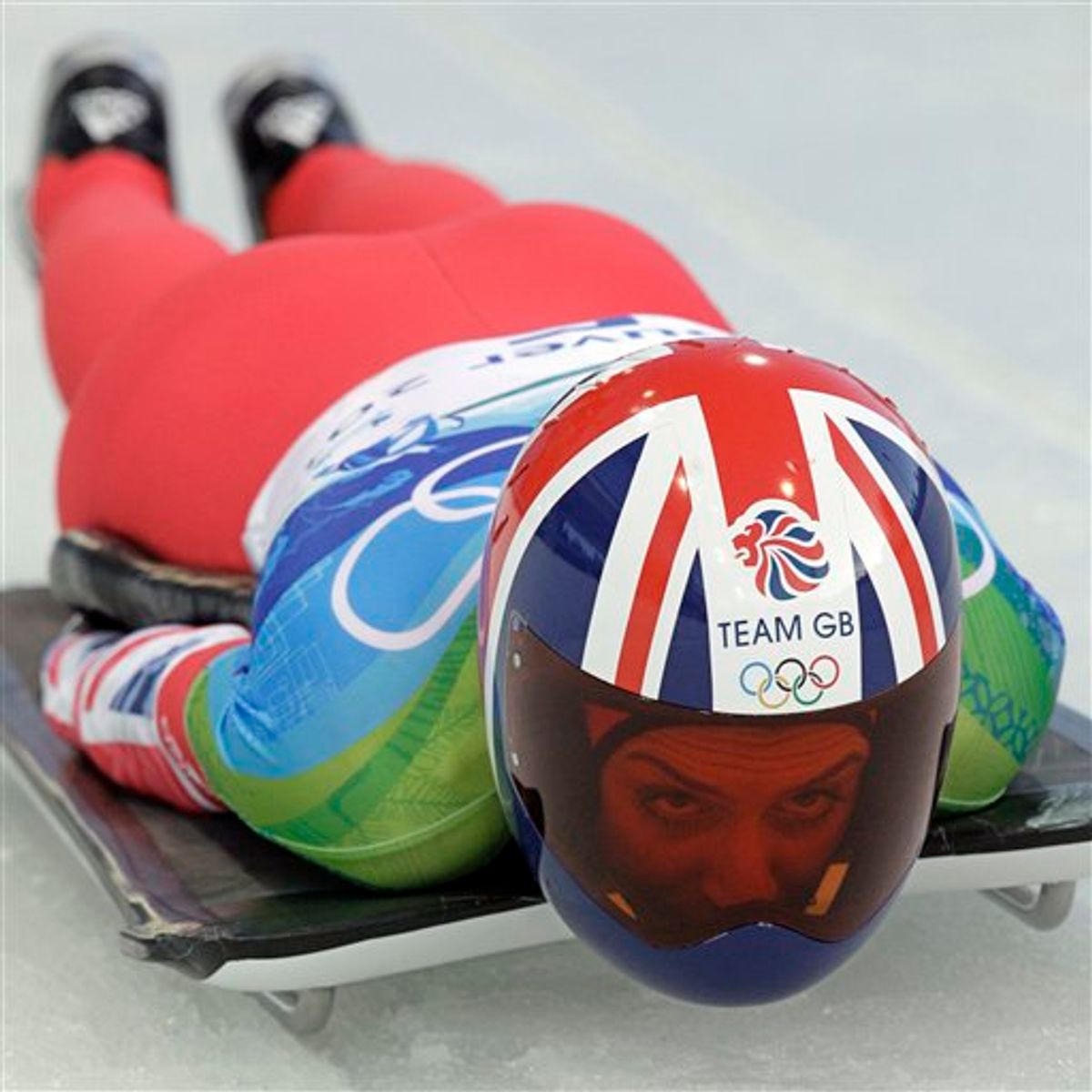 The tragic death of Olympic luger Nodar Kumaritashvili cast a harsher spotlight on one of the more obscure Olympic events. But what of the even less known, but seemingly more dangerous sport of skeleton, where competitors hurtle down ice chutes head-first?

After brief Olympic appearances in 1928 and 1948, the sport of skeleton wasn't reinstated until 2002's games in Salt Lake City. And while, following Kumaritashvili's death, the luge event was moved to safer, shortened courses, the skeleton (the finals are Friday night) and bobsled events continued on the original, full-length course at Vancouver's Whistler Sliding Center, home of the fastest track in the world.

"The Whistler track is super-fast due to its grade," racer Noelle Pikus-Pace, one of two American women to compete in this year's event, explained to CBS News. "From curve one down to curve three, we drop so quickly so suddenly ... Any error can cause injury." Melissa Hollingsworth, a Canadian skeleton athlete and a top competitor for the gold medal, has said in no uncertain terms that the course is "dangerous."

So just how scary is skeleton? Not all racers agree that the sport, and the Whistler track in particular, is unsafe. Cassie Revelli, a U.S. Skeleton Team member who is taking some time off from competition to recover from an injury, acknowledges the technical challenge the course presents yet reports that she has "not heard concern about the safety of the skeleton community" in Vancouver.

John Daly, at 24 the youngest athlete on this year's Olympic skeleton team, has only fallen off his sled once and says it wasn't a big deal when it happened. "If you get away from the sled, it's just like sliding down ice, only a little bit faster," he tells me. "You'll eventually stop with some burns on your butt." Then he mentions that his roommate, Luke Schulz, "did crack his head open last year in Switzerland." (Thankfully, Schulz is fine now, after "a couple of stitches and CAT scans.")

As it turns out, skeleton is widely held to be the safest of the three sliding sports, partially because its sled's steering mechanism is subtler and more precise than that of a luge sled, making turns less risky. Revelli attributes the sport's relative safety to athletes' low center of gravity. And, as Daly points out, "If the bobsled rolls over on you, that's 500 pounds." Skeleton sleds, by contrast, top out at under 95 pounds.

Martin Rettl, who took home a silver medal for Austria in 2002 and now serves as Team USA's driving coach, goes so far as to say that skeleton is "a very safe sport." He concedes that "if you make a mistake, there can be a broken arm or a broken leg," estimating that "90 percent [of the time], if something happens, you can be sure that ... something was in the track." During his 17-year sliding career, Rettl says he didn't experience a single injury.

The sport has changed a great deal since Rettl took his first plunge down a family friend's track at the age of 15 and found himself hooked. Skeleton traces its roots back to 1882, when British soldiers built a track to sled between two Swiss cities. The sport that resulted was dubbed "cresta" and, unlike its later incarnation, skeleton, took place on a different kind of track than bobseld and luge. (As for skeleton's intimidating name, some believe it was derived from the Norwegian word for "sled," while others claim it refers to the sled's shape.)

Revelli, who also works as a resident skeleton expert at Utah Olympic Parks, explains that the sport was much riskier in 1948, after which it was excluded from the games due to concerns for competitors' safety. Beginning in 1970, several modifications, including a new kind of sled, made the event safer, and in 1992 a World Cup skeleton competition was established. Seven years later, skeleton racers learned that their event would finally be readmitted into the next Olympic Winter Games, in 2002.

When Rettl began racing in 1989, the Fédération Internationale de Bobsleigh et de Tobogganing had only been funding skeleton and lobbying for its inclusion in international events for three years. Since then, he says, the sport "is getting more and more professional. In the beginning ... every country was working together. It was a big family. You could really feel the change in 1999."

Despite sacrificing some camaraderie, Rettl sees the new developments as positive, noting that the Olympic event has increased exposure for the little-known sport. An enthusiastic evangelist for skeleton, Rettl encourages everyone to try it at least once. When he finds out that I grew up not far from Lake Placid, N.Y., which houses one of the country's few training tracks, he spends a few minutes attempting to convince me to schedule a test run. "From the outside ... it looks very scary because your head is just an inch away from the ice," he says. He's so persuasive that I begin to forget all about my clumsiness and cowardice and actually consider looking into it -- but only for a moment.

In fact, if there's one common factor that seems to motivate most skeleton athletes' devotion to the their somewhat obscure obsession -- a pursuit whose training includes endless running and lifting and eats up five hours of Daly's day, year-round -- it's the utter exhilaration of sliding. It's easy to assume that some kind of unconscious death wish inspires the racers' head-first heroics, but just the opposite comes through in their breathless talk about the sport: What really seems to compel them is a desire to condense life's greatest sensations into the intensity of a single, minute-long plunge.

"I love speed more than anything else in sports," says Rettl, while Revelli praises the sense of decisiveness and power she gets from skeleton: "There are so many variables that go into sliding, and to just be able to control a few of them is an amazing feeling." In describing his love for the sport, Daly's voice gets dreamy and urgent at the same time, like he's talking about a new romance.

"I get to go on a roller coaster every day of my life," America's youngest competitor tells me. "You're going down that track, off the side of the wall, going 4 or 5 G's... Sometimes you feel like that sled's not even underneath you."