Whether you believed him or not, the golfer's apology was what rehabbers might call one hell of a qualification 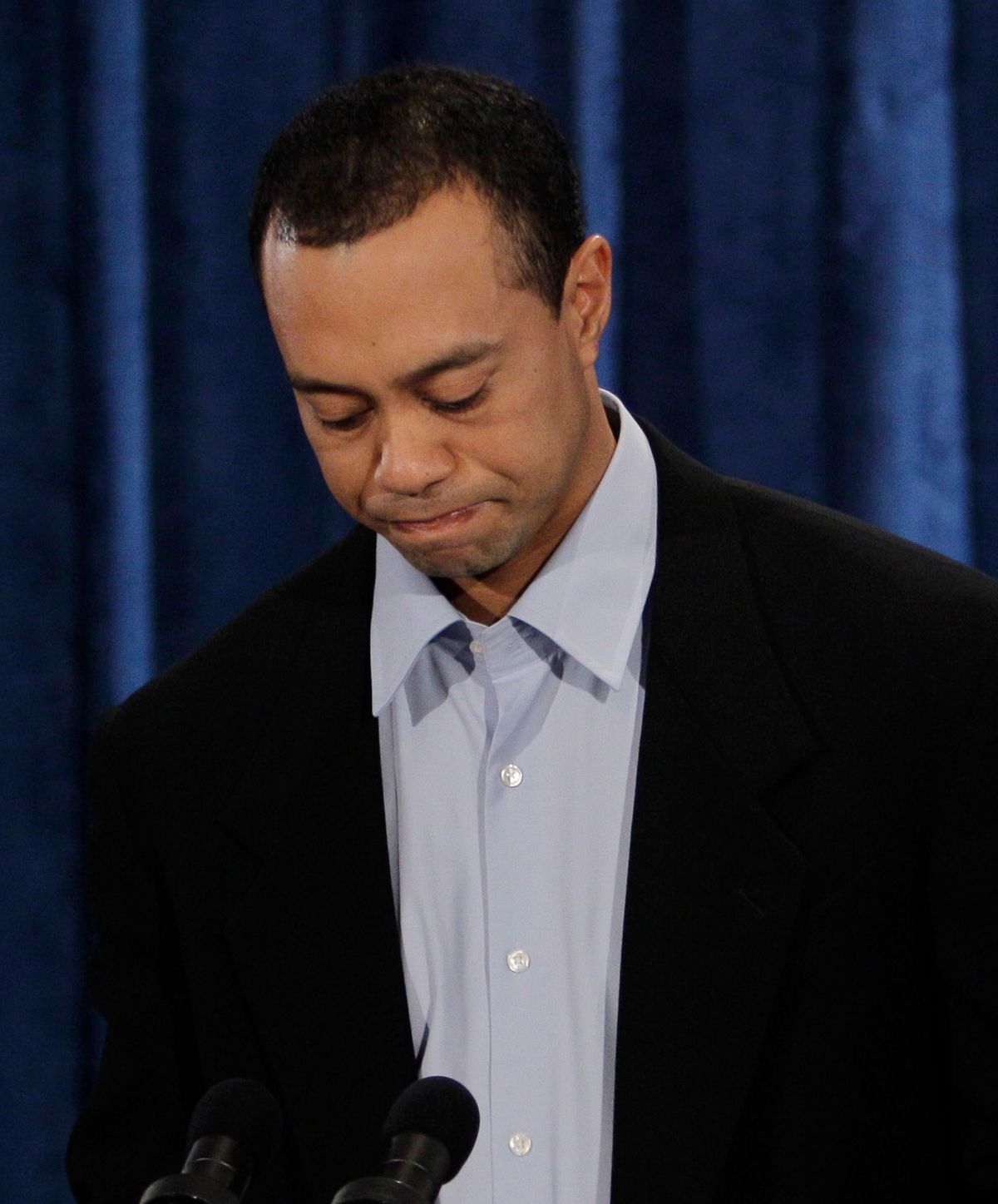 He did exactly what everybody assumed he was there to do: He apologized. "I want to say simply and directly I am deeply sorry for my irresponsible and selfish behavior," he declared to a room of very carefully selected press, friends, colleagues (like PGA president Jim Remy) and family. He called his actions a "disappointment," and he said he had "let you down."

For those of us watching along – and if you were anywhere near a television this morning, chances are you were – it was a familiar script, one we've seen in the mea culpas of Mark Sanford, Eliot Spitzer, and even David Letterman. So eye-rollingly predictable have these televised walks of shame become that prior to his press conference, Twitter was trending with "tigershouldsay" suggestions.

But then, after tossing around several cryptic references to how "embarrassed" he was by his "behavior," at the six-minute mark, Woods finally made this public confession his own. "I was unfaithful. I had affairs. I cheated," he announced. "What I did was not acceptable … I convinced myself that normal rules did not apply. I thought only about myself. I ran straight through the boundaries that married people should live by. I thought I deserved to enjoy all the temptations around me. I felt I was entitle ... I was wrong. I was foolish. I don't get to play by different rules. I hurt my wife, my kids, my mother, my wife's family, my friends, my foundation, and kids all around the world who admired me."

For a lot of people whose minds were already made up about the guy, nothing he said before or after mattered. Woods had barely left the podium when a news commentator on Hulu (where it was being livestreamed) piped up that he didn't buy it. Commentors on the Washington Post were in agreement, calling him a "bad actor" and a "fake."

But whether or not you believe that sex addiction is real, or that the richest athlete in the world has been struggling with it, what Tiger did today was what anyone familiar with 12-step programs would call one hell of a qualification.

He didn't lay any of the responsibility on "the disease." He owned up to his actions and the considerable damage they've caused. Did he list the people he'd harmed by his actions? Step 8. Did he state directly "It's now up to me to make amends"? Step 9. Did he spend considerable time talking about his Buddhism, how it "teaches that a craving for things outside ourselves causes an unhappy and pointless search"? Step 2, Higher Power, come on down (and thanks but no thanks, Brit Hume). Did he express gratitude for the support he's received, and his intention "someday to return that support to others who are seeking help"? That's Step 12! All of which, by the way, take humility and guts.

Maybe he's blowing smoke up our collective butts. Maybe next week he'll be in Vegas with a pancake waitress on his lap. But it's not hard to imagine someone who has won 95 professional tournaments applying the same discipline and rigor to his emotional life as he does to his game, assuming the motivation is there.

And motivation is something Woods doesn't lack for. The profoundly private athlete may have looked deeply uncomfortable at the dais this morning, and he may have stumbled over his carefully crafted words several times, but every time he spoke of his wife and children, he took on the steely, "Don't even think about messing with me" attitude of a ferocious, world-class boss man. "I understand people have questions," he said. "Every one of these questions and answers are between Elin and me. These are issues between a husband and wife." And he was even less ambiguous on the subject of the rumors that have swirled around since that fateful post-Thanksgiving fender bender. He stated firmly, "Elin never hit me that night or any other night. There has never been an episode of domestic violence in our marriage. Elin has shown enormous grace and poise throught this ordeal. Elin deserves praise, not blame." He also asserted that the press "said I used performance-enhancing drugs. That is completely and utterly false." And after emphasizing, "My behavior does not make it right for the media to follow my 2 1/2 year-old-daughter to school and report the school's location," he pleaded through gritted teeth, "For the sake of my family, please, leave my wife and kids alone."

After announcing that he's returning to treatment and doesn't know when he'll come back to golf, Woods left the stand and hugged his mom in what looked like a tearful embrace. (It came as a relief that his wife, Elin, wasn't in the crowd. It would have been unbearable to have a camera locked on her face, all the better to scrutinize her every expression.)

All told, Woods apologized so many times that it prompted a fellow Salon staffer to call it "stomach churning." But jeez, if he'd held back, he easily could have been criticized for lack of contrition. And even if you're the king of the world, it's still got to suck to stand before that world – and perhaps even more excruciatingly, your mom – and admit you've screwed up your life. All the money and girl-on-girl action in the world doesn't make you any less a person – a husband, a father, a son.

Does his statement today let Woods off the hook for his epic marital fail? Well, you and I were never the ones to grant absolution in the first place. That's up to the people he truly has let down, the ones on his amends list. As he said, "My real apology will not come in the form of words. It will come from my behavior over time." Perhaps he'll get there, perhaps he won't. It looks like he's making the attempt, one step at a time.