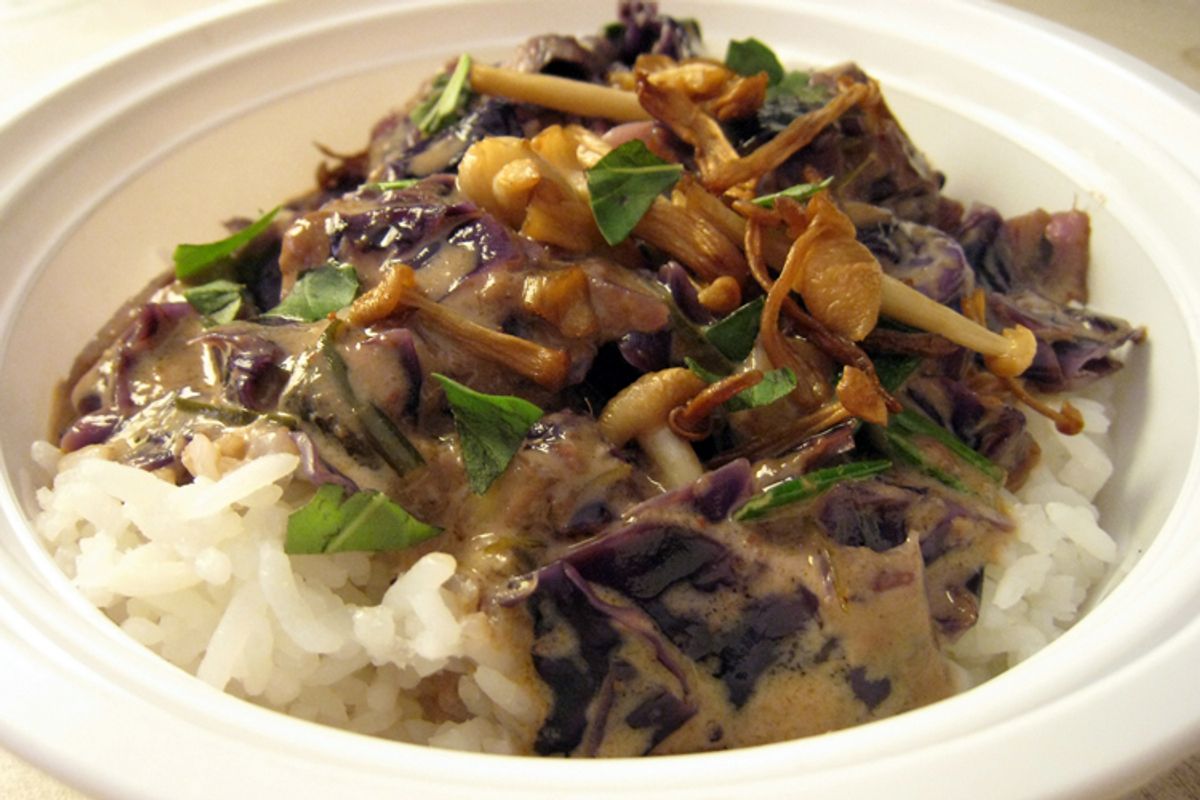 Once upon a time, people loved and respected cabbage. They ate it raw for its gentle crunch, they browned it slowly with noodles for its caramelized sweetness, they salted it down as an offer to the god Zymurgy, who transformed it into the tart, mellow, endlessly complex gift we call sauerkraut. (Zymurgy loves all his children, but the ones who live in supermarket jars and hot dog carts, with their one-note sourness, he loves a little less than others.) Friends, cabbage was not, in headier days, just to be launched, all jokey-jokey, into the crowd from floats in New Orleans St. Patrick's Day parades, the stuff of stinking-up-the-house memories. It was king.

This is where my mastery of the mythology ends. I don't know what happened to ruin its reputation, but it might have something to do with the fact that it has the tendency to unleash a touch of sulfur into the air when boiled mercilessly into oblivion. It's not cabbage's fault! You have to treat your gifts with care! Like subjecting it to insanely hot pans for short periods of time.

My friend Molly of the wonderful blog Orangette turned me on to a super-quick, super-satisfying dish, ready in minutes, so long as I have a head of cabbage and an egg in the house -- you slice the cabbage fine, give it a quick, ripping sear in smoking-hot oil until it browns in spots, hit it with some hot sauce and soy sauce, toss it in the pan until it just softens up, and serve on toast with a fried egg. It's sweet, salty, peppery, crunchy and rounded out with yolk dribbling through the tender shreds of cabbage.

Playing on this basic structure, you can do tons of variations; one of my favorites, for instance, is to use the North African chili-tomato-coriander paste called harissa instead of hot sauce and serve it on pita bread, toasted with olive oil until crunchy.

Here, I've taken the method and gussied it up slightly, toning down the sear a bit and giving the dish a sauce. The cabbage's sweetness and gentle crunch make for a lovely counter to the spicy, powerfully herbal Thai-style curry, all tied together with rich coconut milk. The optional garnish of seared enoki mushrooms gives a nutty accent with a pleasing chew and boatloads of umami, though I do confess it adds upward of five whole minutes to the overall prep time.

Thai red curry seared cabbage
Serves 2-3 as a single-dish meal; more as a part of a multi-dish meal