Glenn Beck: The craziest one at the CPAC party 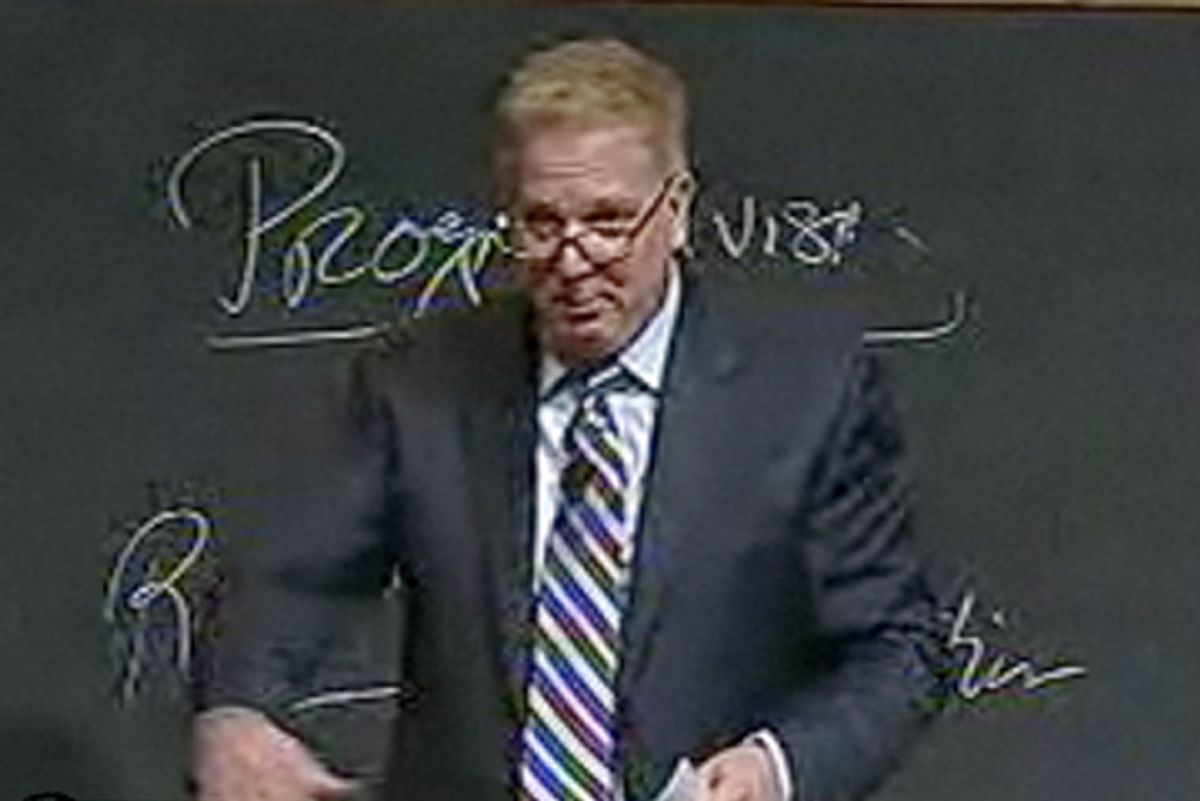 There was really only one way the weird conservative carnival called CPAC 2010 could end Saturday night: with Glenn Beck stalking around the stage for an hour, scribbling paranoid wordplay on his trademark chalkboard, praising Calvin Coolidge and giving dramatic readings of a poem by a bona fide Socialist to stir an overflowing, anti-government crowd into a frenzy.

"This is America," Beck said. "There is no cap on success. There seems to be some sort of cap on willingness to search for success. That has to change in America. We have a different system here. We choose our own destiny. We choose. All men are created equal. All men will not end up equal."

The overarching theme of Beck's speech was that someone was out to ruin America, but by fighting the enemy the way addicts fight their problems, doom could be averted. Exactly who that someone was, though, was a little murky. It was not President Obama, the villain for most of the rest of the speakers throughout the three-day conference. "What is it that's caused us this problem?" he asked. "If you say Obama, it's too simple an answer, because it's not just Obama."

The villain, though, turned out to be far deeper, far more nefarious. Beck spends a lot of his time on his TV show talking about the 1920s; his CPAC speech was no different. It didn't take long before he had scrawled the real menace's name onto his chalkboard: "Progressivism." Woodrow Wilson and his allies have their tentacles deeply wound around today's politics, it seems; after all, liberals call themselves progressives, and if Wilson's bunch can be discredited, so can modern liberalism. QED! "After the Progressives got into office with Woodrow Wilson ... he gives us the Fed -- how's that working out for us?" he said. "Then he gives us the -- let's remember this, America -- progressive income tax." He drew the word out into three or four extra syllables' worth of S's, sneering as he drew his theories out in chalk. "Everything's changed since the Progressives came," he said.

And if Wilson is the bad guy, Calvin Coolidge had to be the hero. Beck roused the crowd into a lengthy ovation for tax cuts Coolidge advocated nearly 90 years ago, which brought the nostalgia at CPAC to new highs. He mocked the media, accusing reporters of some sinister conspiracy to cover up the fact that the Roaring Twenties were good. And then suddenly he was jumping back to the modern day, bashing U.S. bond sales to China. It was hard to follow if you were trying to find any logic to it all, but that didn't seem to be a problem for many of the people in the room. It certainly wasn't for Beck.

The speech was full of other Beck trademarks -- the "funny" Kermit voice, the other weird accents (including one that was supposed to be French, but sounded more like Boris and Natasha). There were the obligatory tropes about the free market; Beck said his education as a child had been free, in the library (which presumably wasn't funded by any tax money). "We have a right to fail," Beck said. "What we don't have a right to is healthcare, housing or handouts." There was the strange pro-rich populism that Beck has mastered -- at one point, he seemed to say the people who are really suffering amid all the current economic turmoil are the small business owners who, with great regret, have to lay off their workers. There were the extended metaphors using the language of addiction and recovery, which harkened back to his mawkish Christmas tale. The Republican Party was like Tiger Woods, and it had to admit its mistakes before it could be saved. The entire country was like an addict; we have to get over our selfish insistence that the world doesn't really work like the plot of an Ayn Rand novel before we could be saved.

But it was at its most Beck-ish when the TV star started reading poetry. He roused the crowd to its feet with a recitation of "The New Colossus," by Emma Lazarus, the leftist writer whose politics Beck brushed past (if he ever knew about them to begin with) to make a point. The poem is usually read in a tender way, he said mockingly: "What are we, a hospital?" The way it's meant to be read, apparently, is with great bombast. Which Beck proceeded to demonstrate.

The recitation, and the whole speech, was captivating, it was a little scary, it was almost completely incomprehensible. It was, in other words, pure Glenn Beck. Watching him walk the audience through his absurd fantasies and his melodramatic bluster, you had to wonder what would have happened if he'd been on the CPAC straw poll ballot with the GOP's list of would-be presidents. All weekend long, there wasn't anyone else who held the stage with the presence -- or the craziness -- Beck did.