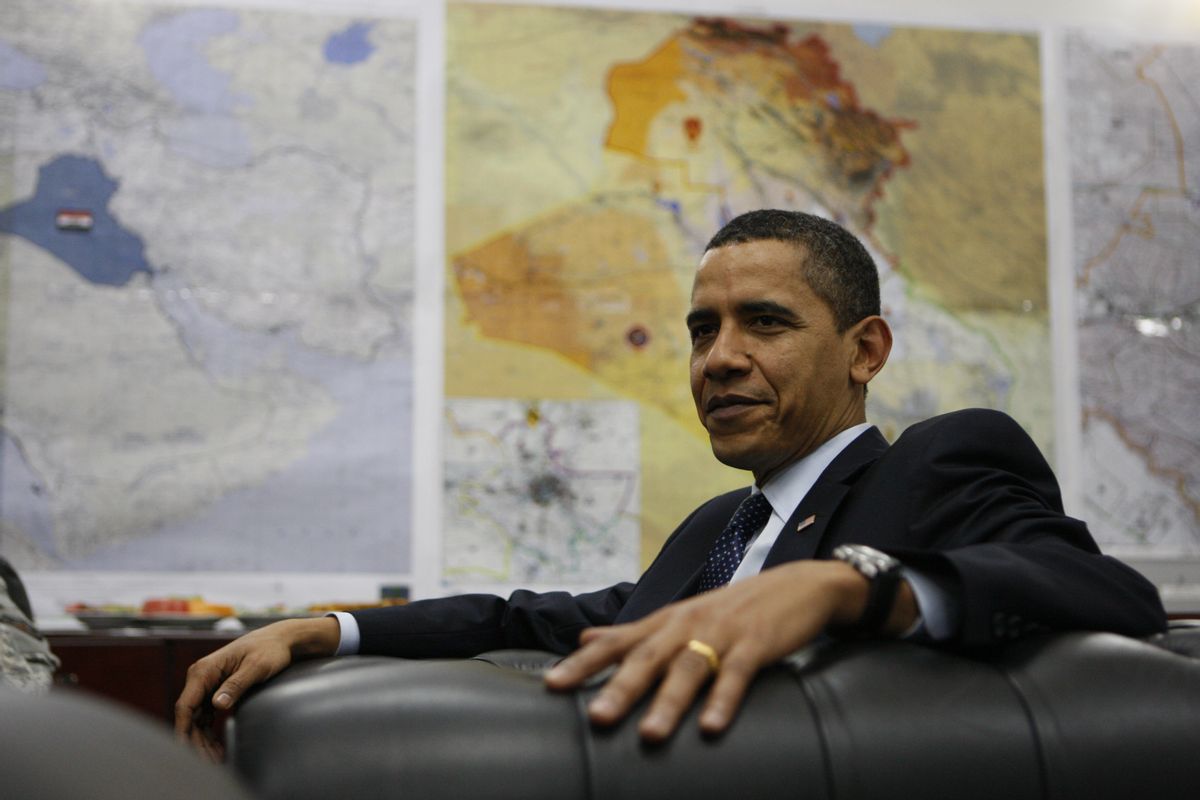 FILE - In this April 7, 2009, file photo, maps of Iraq can be seen on the wall as President Barack Obama meets with Gen. Ray Odierno at Camp Victory in Baghdad, Iraq. (AP Photo/Charles Dharapak, FILE) (Associated Press)
--

The White House may have taken an important step toward passing healthcare reform legislation when it finally unveiled President Obama's own proposal Monday morning. But that doesn't mean things get easy from here.

The first priority for Democratic leadership is likely getting the House to pass the bill that the Senate has already passed. Then action would go to the Senate, which would pass an amendment to the bill fixing various issues with it and incorporating the changes that Obama would want. Or maybe it's the other way around; negotiating the sequence of events has been a problem, as House Democrats are nervous about voting on the Senate's bill before they know exactly which fixes will pass, or whether any even will.

On a conference call with reporters Monday morning, White House communications director Dan Pfeiffer held out hope that the GOP won't try to block passage in the Senate through a filibuster. That appears to be little more than a rhetorical position at this point, though, one designed to try to make Republicans pay politically for their obstruction -- and to give Democrats cover when they turn to an alternative procedure in order to pass the fixes. That procedure, known as reconciliation, would prevent a filibuster and allow passage under a straight majority vote.

Pfeiffer made it very clear during the call that the White House is ready to go the reconciliation route, saying Obama's bill had been drafted with the restrictions that come along with the procedure in mind and emphasizing, "One thing I want to be very clear about is the president expects and believes the American people deserve an up-or-down vote." But it's not clear that Democrats will have the 51 votes necessary to win using reconciliation.

The Senate, and the difficulty Democrats have had getting reform done there, have gotten the lion's share of the attention during this whole process. But getting this legislation through the House won't be a cakewalk, either.

The House passed its own bill last year only by the narrowest of margins. There were 220 "aye" votes, with 218 required. In order to get that slim majority, House Speaker Nancy Pelosi had to assemble a shaky coalition, and she might have trouble holding it together now. For one thing, Pelosi will have to convince House liberals to stay on board despite their concerns about the Senate bill and the lack of a public option in Obama's proposal, among other things. There could be a problem on the right flank, too, because  under Obama's plan, the Senate's language on abortion funding would become law, rather than the more restrictive measure in the House bill. Rep. Bart Stupak, D-Mich., who authored the controversial abortion amendment in the House bill, has previously said that he won't vote for a bill that doesn't contain his amendment, and has promised that "10 to 15 to 20" others will join him.

Update: This post has been corrected since it was first published.