Mitch McConnell gets all stimulated

The GOP leader gets points with his base by bashing the stimulus, but what would he have done in power? 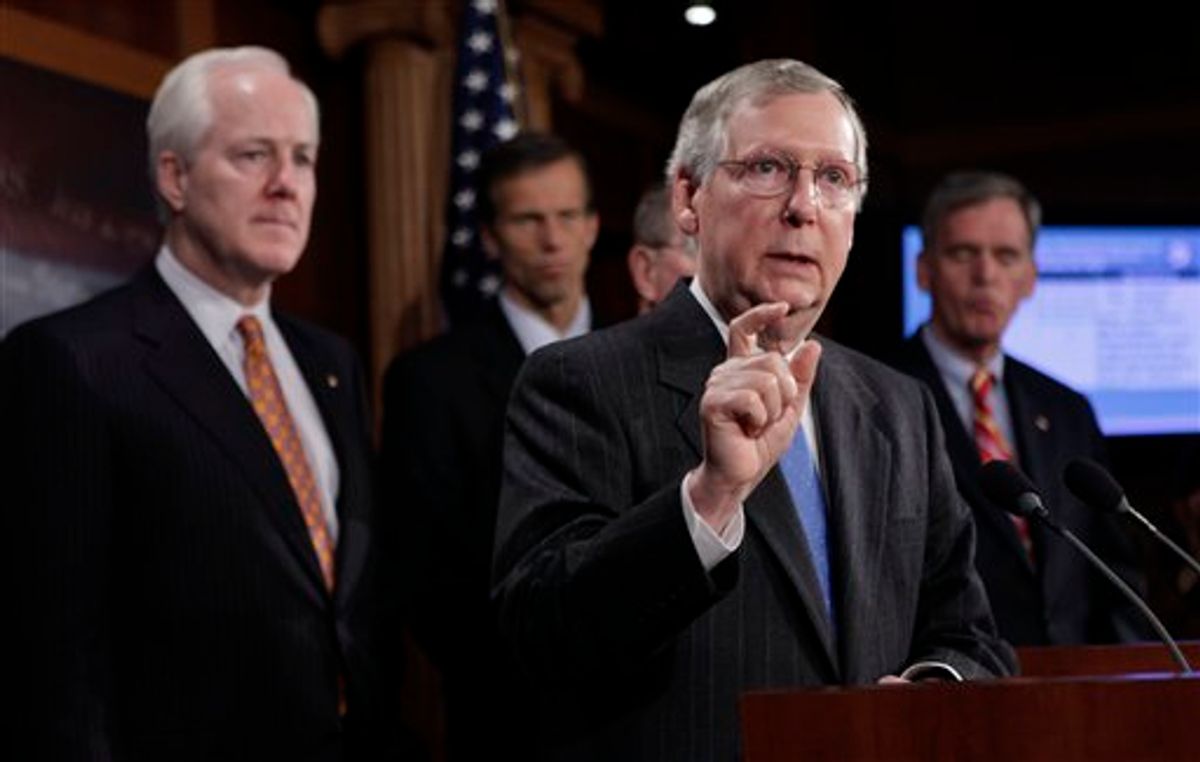 The ostensible objective of a political party is to gain and retain power. But today's Republicans seem intent on showing that being shut out isn't all that bad.

Out of power, there’s little chance of catching the blame for anything bad that happens. There's no need to contribute the hard work of producing workable policy. And maybe best of all, a minority party can tend to its base by stressing ideological purity that could never actually be translated into responsible governance.

The GOP of 2010 often seems content with this lot in life. Take, for example, the statement made yesterday by Senate Minority Leader Mitch McConnell, R-Ky., about the stimulus. On Fox News Sunday, McConnell said, "I think the evidence is pretty clear, you know Tiger Woods and John Edwards had a better year than the stimulus did."

McConnell acknowledged, "It probably did save a lot of state government jobs, and I'm sure the governors were grateful to have it. They don't have the luxury we have of borrowing money from future generations to deal with short- term emergencies." But that doesn’t count, you see, because, claims the GOP leader, the bill did "little or nothing" for the private sector.

There’s no need to take McConnell’s claim about the private sector seriously, but let’s do it for a second. If we take the whole of his argument seriously, what he’s saying is this:

You see where this is headed, right? What McConnell is telling us he would’ve done is to allow the state governments to eat the pain of the recession themselves, shedding thousands of jobs and cutting social programs like education and policing down into oblivion. This is the reinvigorated right wing’s line on everything: don’t bail anyone out. If they're in trouble, it's their own fault.

This is, of course, a fairly preposterous idea for how to run a country. For one thing, the public and private sectors don’t have some impermeable wall between them. That's why there’s something approaching a consensus of mainstream economists that the stimulus did, in fact, improve the economy, relative to the depths to which it was headed. Even Doug Holtz-Eakin, John McCain's top economic adviser in the campaign, admitted it last year. Spending in the public sector can prop up the private sector, and cutting back federal deficit spending can cause general recession. (See the so-called "Roosevelt Recession" of 1937 for the classic example.)

Besides, though, I’d like to see what McConnell would have done if he were running the country. Republicans have a newfound purist zeal for small government these days. It’s not unusual to hear them rebuke the Bush administration as not genuinely conservative, because of its heretical failure to shrink government along with cutting taxes. But what’s the central charge in this indictment? Often, you’ll hear conservatives cite the spectacularly expensive prescription drug benefit, passed in 2004. That bill -- now commonly described as Medicare Part D -- was passed to shore up the president’s chances at reelection. And it worked. It’s a highly popular program, despite its massive cost.

The funny thing about Republicans who repudiate their party’s high-rolling recent past is that many of these people, like McConnell, are the same guys. They just happen to be out of power now. And being out of power means they get to pretend that the compromises with reality that are part of running the country successfully -- compromises like Medicare Part D, or for that matter the stimulus -- aren’t necessary.

So let’s finish out the thought experiment implied here: McConnell is the majority leader in early 2009, and the economy is shedding jobs and slowing down alarmingly. It’s a remarkable opportunity for him to say "no" to the president, and force almost every state to close down services on a massive scale. He’d certainly thrill the Ayn Rand-types in his party, by sticking it to the looters who wanted to live large on the public dole, with their fancy-pants roads, schools and fire departments. He would also, of course, plunge the country into a depression, and provoke massive public outrage from everyone in the country whose dog isn't named after John Galt. The GOP would get buried under the full weight of massive unemployment, and inadvertently hand to Democrats their fantasy of a new New Deal in the Obama administration.

And that’s why McConnell would never, ever do it. It’s just fun to talk about.