The power of pink

It can make feminists furious and an entire city feel emasculated. Why does one little color evoke such passion? 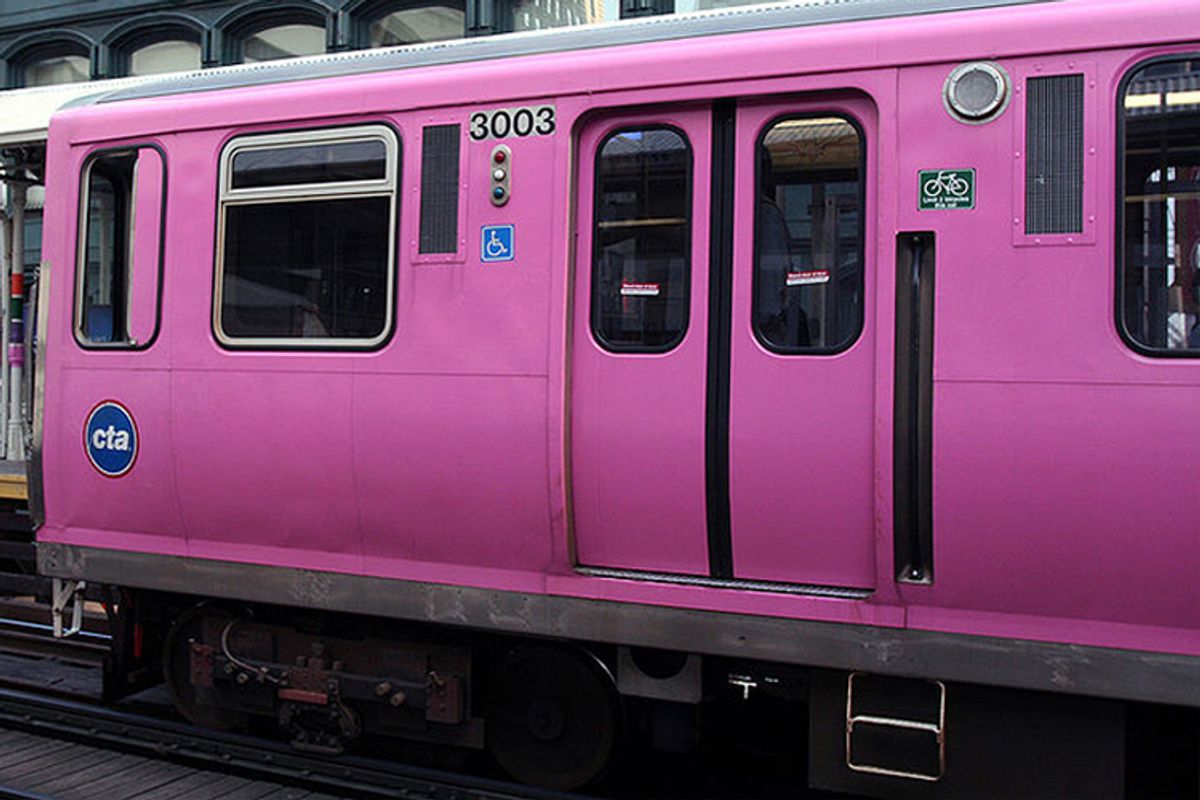 In 2006, the Chicago Transit Authority added a new rail line to its color-coded system and held an essay contest for schoolchildren to determine which color it should be named after. Gold and silver were apparently popular choices -- all of the primary and secondary colors were already taken, along with brown -- but the winning essay was by a 7th-grader named Eleni Vrettos, who wrote, "Who does not like pink? It's so bright and lively ... if it's pink people will want to ride it."

The fact that we got a Pink Line based on the recommendation of a 12-year-old girl is one of the things that makes me love living in this city. The reaction to it, however, made me even more of a cranky feminist than usual. For a few days after the announcement, the city papers and local blogs lit up with outrage over the decision -- much of it tongue-in-cheek, granted, but all of it expressing the same message: A pink train would be humiliating to the good people of Chicago. We are the hardworking, meat-eating, bar-brawling, sports-loving, dirty-politicking, multiple heart attack-surviving hog butcher for the world! We are men, except for the slightly more than half of us who are not! And you expect us to pay good money to ride on something called the "Pink Line"? Why not just put a tutu on the Sears Tower, or fill Soldier Field with tampons, or come to my house and cut my balls off?

It's no wonder that in a slide show for Slate, Jude Stewart calls pink "the most politicized color of our age." Today, "when we think pink, we think Disney Princess, Barbie and Fifi the poodle," but according to Jo B. Paoletti, author of the forthcoming "Pink and Blue: Telling the Boys From the Girls in America," this is a relatively recent development. Prior to the second half of the 20th century, babies were dressed in all sorts of light colors ("so clothing could withstand frequent hot washings," Stewart explains), and when a pink-blue gender divide emerged, it didn't automatically go the way we'd expect it to. In France, pink was considered feminine and blue masculine, but "In Catholic Germany, little girls were dressed in blue in honor of the Virgin Mary, while little boys wore pink, considered a watered-down shade of masculine red." In America, there were supporters of both camps, but Ladies' Home Journal declared in 1918, "The generally accepted rule is pink for the boy and blue for the girl. The reason is that pink being a more decided and stronger color is more suitable for the boy, while blue, which is more delicate and dainty, is prettier for the girl."

Just let that sink in for a minute; less than 100 years ago, blue was thought to be manifestly the girlier color. And now think about the fact that today, we have scientists telling us that girls and women are hard-wired to prefer pink. Because chicks were once in charge of foraging for "reddish fruits," or because it reminds us of engorged ladybits, or something. Clearly, there must be an evolutionary reason for it, because our perception of certain colors as "decided and stronger" and other colors as "more delicate and dainty" couldn't possibly be arbitrary, or socially constructed. I mean, have you seen little girls go nuts for pink stuff? Have you seen how little boys instinctively reject it? There's no way they're just being socially conditioned so early! Reddish fruits, people!

And there's certainly no way that marketers shifted the whole culture away from seeing pink as a gender-neutral color because it was more profitable, or that the people making up the rules were originally divided on which color should go with which gender, as though it wasn't obvious at all. Oh, wait.

Merchandisers liked how color-coding babies' clothes bolstered sales -- after all, whatever rule you were following, color-coding meant you couldn't dress little Johnny in Sally's hand-me-downs. Department stores began competing to establish a color-coding rule: In 1927, Wanamaker's in Philadelphia, Marshall Field's in Chicago, and Maison Blanche in New Orleans all pushed pink for girls, but other stores -- Macy's and Franklin Simon of Manhattan and Bullock's of Los Angeles -- positioned pink as a boy's color.

Pink, writes Stewart, is "also the provenance of powerful men, both gay and straight" -- the wealthy, exquisitely dressed ones, anyway -- and has appeared on battleships and bombers; basically, it's no more inherently feminine (or masculine) than any other color. And yet, "No other color has such power to peeve women or tempt them to rip it up and reclaim it. Somehow it encapsulates the whole predicament -- how American women now earn more advanced degrees than men but still earn 77 cents to every male dollar."

For my 77 cents on the dollar, that's because anything that's such a strong symbol of femininity also serves as a constant reminder of how much our culture still devalues girls and women. Sure, we've got female CEOs and secretaries of state and surgeon generals and Supreme Court justices now, but if you want to know how not post-feminist we are, just look at the response to a boy wearing a skirt to school, or the enduring comedic value of a man in a dress, or the reaction of an entire city to having one train line called "pink." It's not about the color itself -- if Macy's had pushed a little harder in the '20s, we might be having this conversation about blue -- but the fact that anything that reads strongly feminine is thought to be beneath men, a laugh riot when it's adopted ironically and an abject humiliation when it's forced upon an unwilling dude. The color red cut with white has no intrinsic meaning, but anything "girly" is still automatically identified as frivolous, delicate, dainty, weak and downright embarrassing. If women have a passionate reaction to that message, can you blame us?