The out-of-power right has built a counterculture, just as the left did in the '60s 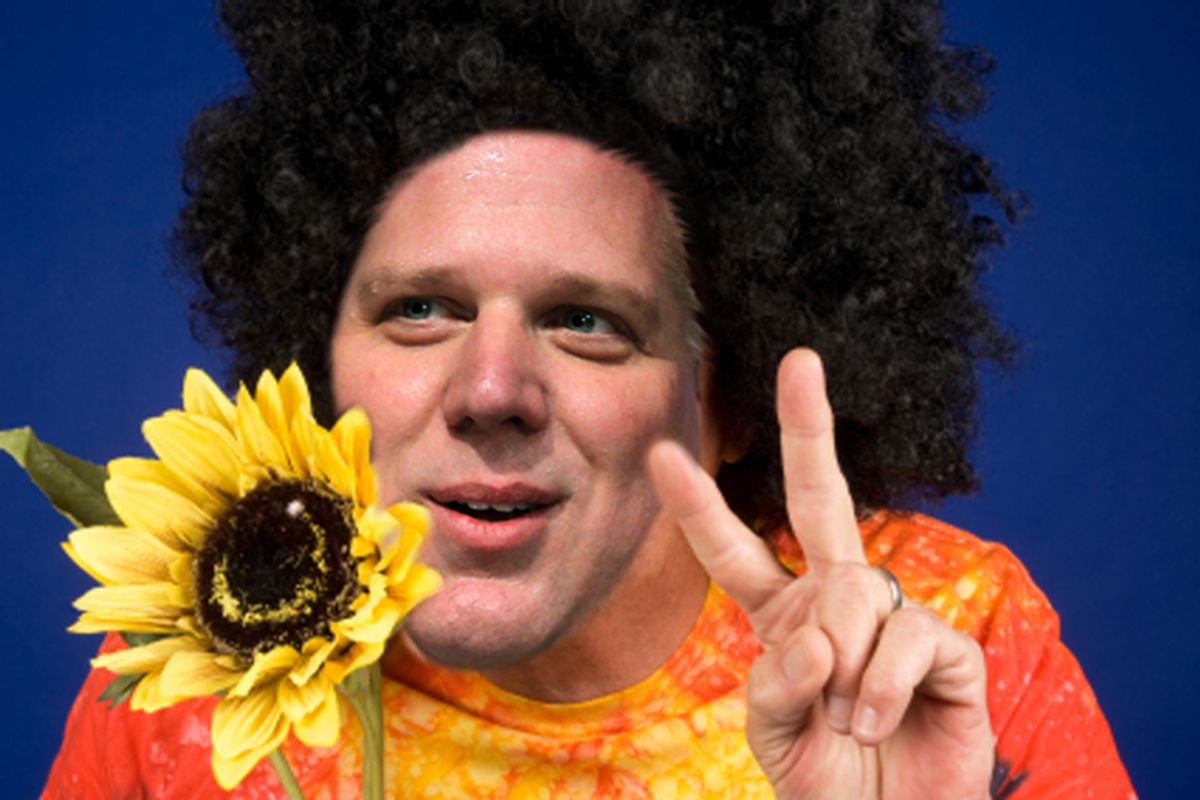 Street theater. Communes. Manifestoes. Denunciations of "the system." The counterculture is back. Only this time it's on the right.

In contrast, a counterculture refuses to acknowledge the legitimacy of the rules of the game that it has lost. Instead of moving toward the center, the counterculture heads for the fringes. Like a cult, it creates its own parallel reality, seceding from a corrupt and wicked society into morally and politically pure enclaves.

In response to the long era of Republican presidential hegemony that began with Nixon, many on the American left adopted the countercultural strategy. Some withdrew to raise rabbits and home-school their children in rural America. Other radicals on the left made pilgrimages in search of utopia to this or that illiberal communist dictatorship -- Mao's China, Cuba, Nicaragua.

Many devoured books by Noam Chomsky and the late Howard Zinn, who taught them that Washington and Lincoln and FDR were all capitalist warmongers and that America was the greatest menace to world peace. They cheered on Jesse Jackson as he denounced an insufficiently multicultural curriculum at Stanford, with too many overrated dead white European males like Aristotle and Dante and Shakespeare on the reading list, by chanting, "Hey, hey, ho, ho, Western Civ has got to go!" Coming at a time when the right was becoming increasingly scholarly and policy-oriented, these antics by the countercultural left backfired by identifying liberalism with the lunatic fringe in the minds of many middle-of-the-road Americans. (It was its association with the countercultural left in the 1960s and '70s that made the word "liberal" so toxic that it has been dropped by the center-left for "progressive"; New Deal liberal programs like Social Security and Medicare remain popular with Republican and Democratic voters alike.)

As the hegemony of conservative politics deepened in the 1980s and '90s, others to the left of center rejected the counterculture and sought to assemble a progressive counter-establishment. This was the project of the Democratic Leadership Council and its leaders like Bill Clinton, Al Gore and Joe Lieberman. In retrospect they made too many philosophical and programmatic concessions to the reigning right of their time. But many groups to their left, like some environmentalist groups and critics of Pentagon spending, followed them in abandoning the moralistic tone of the counterculture and argued on the basis of facts and trade-offs.

Meanwhile, as counterculture was succeeded by counter-establishment to the left of center, the post-'80s right moved toward the fringes. Like T.H. White's Merlin, the American right is aging backward. What was a mature adult has regressed to a spoiled child throwing a temper tantrum. When he founded National Review in 1955, William F. Buckley Jr. said that conservatives wanted to stand athwart history and cry, "Stop!" The post-Buckley right has managed not only to stop history -- the history of conservatism -- but to run the reel backward.

When Buckley came on the scene in the mid-1950s, the American right was dominated by kooks: right-wing isolationists, Pearl Harbor and Yalta conspiracy theorists, anti-Semites and members of the John Birch Society like the palindromically named professor Revilo P. Oliver. Buckley and his movement conservatives, and later the early neoconservatives, struggled to purge the right of crackpots and create an intellectually serious movement capable of governing the country.

And yet the right of 2010 looks like the fever-swamp right of 1950 instead of the triumphant right of 1980. The John Birch Society, which Buckley and Goldwater expelled from the conservative movement in the early 1960s, was a co-sponsor of this year's Conservative Political Action Convention (CPAC). Folks who claimed that Eisenhower was a communist now insist that Obama is a socialist. (The conservative historian Russell Kirk had the wittiest put-down of the Birchers: "Eisenhower isn't a communist; he's a golfer.")

The tea partiers are the hippies of our time. True, they tend to be relatively affluent -- but so were the hippies. As Tony Hendra once told me, "You had to have a lot of money to take part in the Summer of Love."

Consider the following countercultural features of the emerging American right:

Anti-System Radicalism: Just as the New Left claimed that the New Deal era wasn't really liberal, so the countercultural right claims that the Republican Party from Nixon to George W. Bush wasn't really conservative. '60s radicals like Carl Oglesby denounced John F. Kennedy and Lyndon Johnson as sinister "corporate liberals" in the same way that the radicals of the right claim that the two Bushes, if not the sainted Reagan, were inauthentic "big government conservatives." The radical left had Ralph Nader. The radical right has Ron Paul.

Luddism: A few decades ago it was the countercultural left that opposed science, technology and markets. Now mainstream environmentalists have arguably gone too far in adopting the market rhetoric of cap-and-trade. Stewart Brand, the founder of the Whole Earth Catalog, today seeks to save the environment by means of nuclear power plants, genetically modified crops and urban living.

Nowadays anti-science, anti-technology Luddites are more likely to be found on the right, among opponents of stem-cell research and evolutionary biology. And while the exaggerations and coverups of some scientific proponents of global warming undermine the claim that science on this subject is settled, it is clear that many conservatives reflexively believe the opposite of what progressives say on this and other subjects. If Al Gore changed his mind and announced that global cooling was imminent, one suspects many on the countercultural right would immediately warn of rising global temperatures and flooded coastlines. A counterculture inverts not only the widely shared values but also the agreed-upon facts of the dominant culture they despise.

Street Theater: The eclipse of the countercultural left by the countercultural right is evident in political protest as well. Carnivalesque protest is practically monopolized by the tea-party right in the age of Obama. In the U.S., at least, the street theater of antiwar and anti-World Bank activists cannot compete with the mass demonstrations of the tea partiers. The giant puppets of the left are out. Posters of Obama with a Hitler mustache are in.

Dropping Out: In a letter to other conservative activists in 1999, the late Paul Weyrich, the president of the Free Congress Foundation, called on the right to adopt an explicitly countercultural strategy. "I no longer believe that there is a moral majority," Weyrich wrote. "I do not believe that a majority of Americans actually shares our values."

Echoing the back-to-the-land hippies of the '60s and '70s left, Weyrich called on conservatives to secede from American society and form their own subcultural communities. "And while I'm not suggesting that we all become Amish or move to Idaho, I do think that we have to look at what we can do to separate ourselves from this hostile culture." Weyrich concluded by holding up the countercultural left as a model for the new countercultural right: "The radicals of the 1960s had three slogans: turn on, tune in, drop out. I suggest that we adopt a modified version."

During the freak show at CPAC, the crumbling old conservative establishment sought to prove that it's still relevant by calling for "constitutional conservatism" in its "Mount Vernon Statement." Signed by dignitaries of the old regime like Reagan's Attorney General Edwin Meese, the Mount Vernon Statement is less interesting for its content -- an attempt to reunite the libertarian, religious and foreign policy hawk wings of moribund "fusionist" or "movement" conservatism -- than for its dignified style and invocation of philosophical first principles.

The attempt of the Mount Vernon constitutional conservatives to re-create conservatism as a counter-establishment is almost certainly doomed. Meese and the other signers of the Mount Vernon Statement are to the tea party right what Arthur M. Schlesinger Jr. and other lions of New Deal liberalism were to Abbie Hoffman's Yippies. Indeed, in Glenn Beck, the countercultural right has found its own Abbie Hoffman. In both cases it is hard to distinguish sincere zealotry from self-promoting show business.

The rise of the conservative counterculture may provide the beleaguered Democrats with a stay of execution. A serious Republican counter-establishment, putting forth credible plans for addressing the nation's problems and determined to collaborate with the other party to govern the country in this crisis, would be a greater threat to the new, shaky Democratic establishment than the theatrics of the right's Summer of Love.

Or should it be called the Winter of Hate?