Fact-checking the GOP on healthcare reform 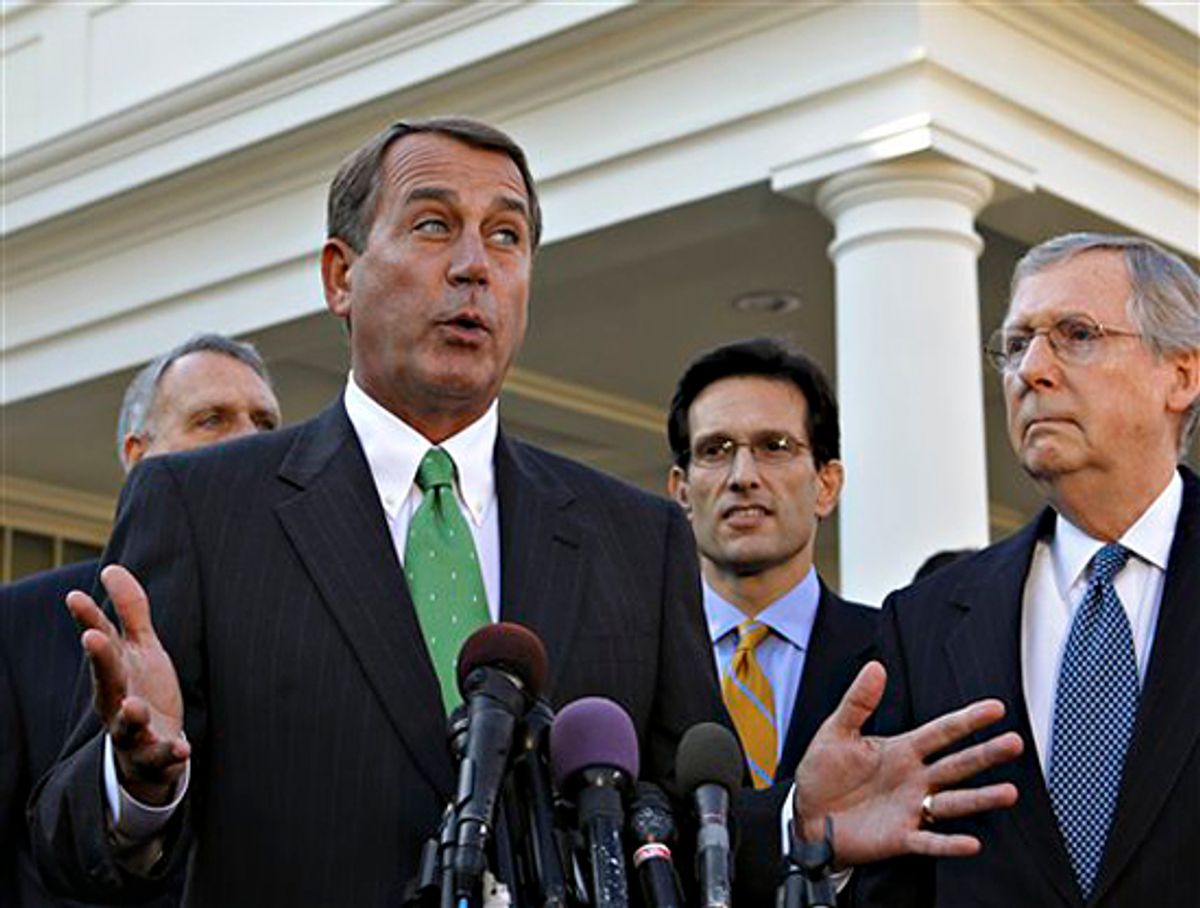 Rep. John Boehner, with other Republican congressional leaders, talks to reporters outside the White House.
--

As the healthcare reform bill waddles toward reconciliation -- a maneuver that would let the Senate pass certain budget-related provisions with "only" a majority vote -- Republicans are complaining, louder than ever, about being excluded from Democrats' efforts to craft legislation. And some in the media are buying it.

Newsweek gave voice to GOP grievances in a piece titled "How the GOP Sees It." It begins with this John Boehner lament: "We've offered to work with the president all year. We've been shut out, shut out, and shut out." Newsweek characterizes the minority party's point of view this way: "Republicans want to help the president succeed, but he won't let them."

Almost no one is noting the extraordinary influence Republicans had on the healthcare reform bill crafted by the Senate, as it made its way through the committee process last year. The bill approved by Sen. Christopher Dodd's Health, Education, Labor and Pensions committee, for instance, included 161 amendments authored by Republicans. Only 49 Republican amendments were rejected out of 210 considered.  Yet the bill got zero Republican votes when it passed out of the committee.

You'll all remember the Senate Finance Committee process, chaired by Montana Sen. Max Baucus. Baucus and President Obama empowered a bipartisan "Gang of Six" from the committee, three Democrats and three Republicans, and they spent the summer locked in negotiations that, again, never produced one Republican vote for the bill in committee. The  Finance Committee ultimately scuttled the public option in its version of the bill, looking for GOP (and conservative Democratic) support.

The Washington Post's Ezra Klein has noted that the final Democratic proposals have contained multiple GOP planks. To mention just a few:

Maybe most disturbing to liberal Democrats, the White House didn't include the public option in the outline of the strong healthcare reform compromise the president wants to see. Even though Obama seems ready to use reconciliation to pass elements of the bill, he's telegraphing his unwillingness to use it for the popular but controversial public option (even though, at one time at least, it likely had 50 votes). The final concession: Sen. Jay Rockefeller, once the public option's most ardent supporter, now opposes using reconciliation to pass the measure because he fears it would be too divisive.

To recap: Senate Democrats have accepted at least 161 Republican amendments to their healthcare reform legislation, they've incorporated core GOP planks, and they've scuttled an aspect of the plan most popular with its base, the public option, because of opposition by Republicans as well as red state Democrats.

But they haven't compromised with Republicans? It seems as though the GOP's definition of compromise and collaboration involves the president and the Democrats dropping all of their ideas and passing the Republican platform. That's OK; it's their job to push their party line. But too much of the media seems to be falling for it.