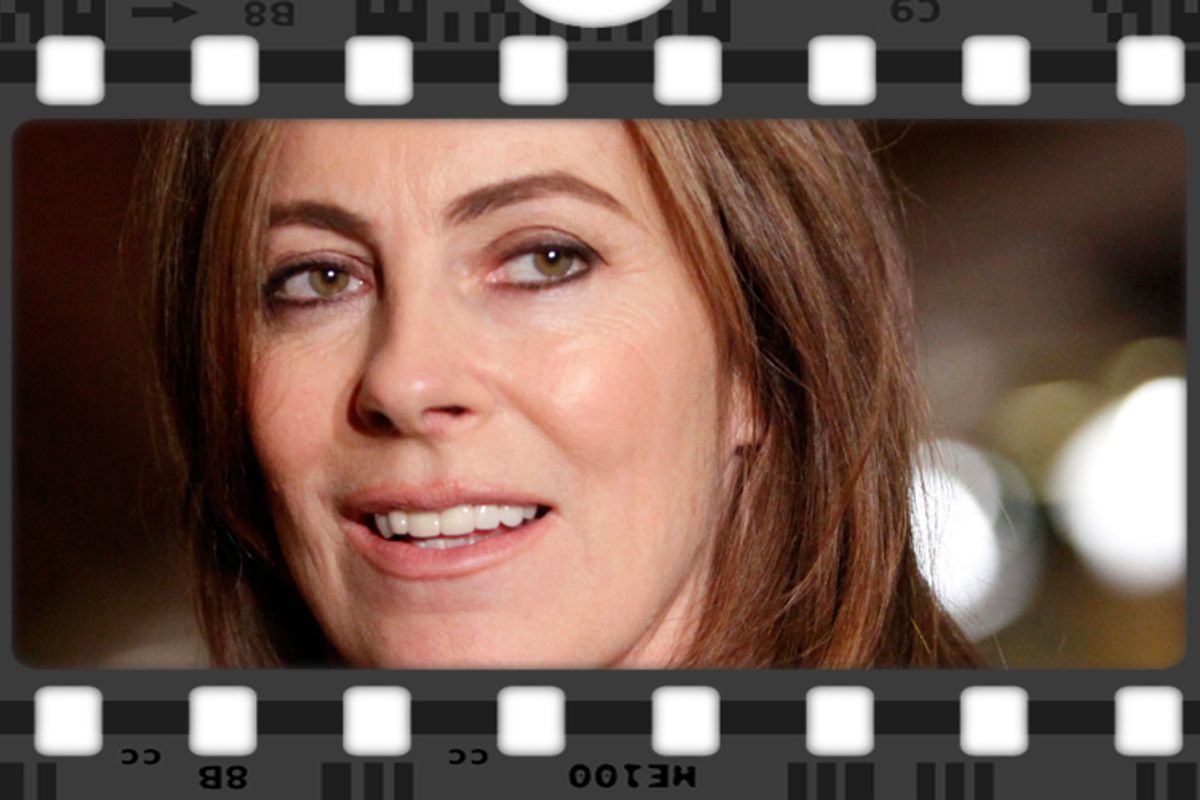 In "The Hurt Locker," Sgt. 1st Class Will James (Jeremy Renner) is the second coming of John Wayne. Just not as cuddly.

What's the point of this metaphor? It's that I'm still coming to grips with how a woman could possibly have dreamed up this spartan American soldier in Iraq, who, while obsessively romancing death as a bomb-squad ace, outdoes the most extreme images of machismo ever produced by mainstream America. While Wayne set the testosterone standard in playing characters who lived to fight, his guys also found time to love women -- Ethan's Martha (Dorothy Jordan) in "The Searchers" and the Ringo Kid's Dallas (Claire Trevor) in "Stagecoach," to name two.

When they bonded with young, earnest boys, Wayne's men became meaningful mentors -- Gillom Rogers (Ron Howard) in "The Shootist" couldn't have grown up without the wit and wisdom of Wayne's John Bernard Books. But Will, with his Wayne-ian steely gaze, his laconic ease at the portals of death, and his patented hero saunter, loves "just one thing," as he tells his baby boy before leaving him, maybe forever, to return to the killing fields of Iraq. And it isn't women or kids.

To their credit, director Kathryn Bigelow and writer Mark Boal never reduce "the thing" to a word. Will's unnamed passion is left to the enormity of our imaginations when we see him back in Iraq in the humongous bomb-disposal suit that insulates him from any direct contact with the world. What's less happy is the confused adulation of this solitary savior at the end of the film, as Will takes the place of the bomb-disposal robot we saw in the opening scene -- a better "bot."

Though none can say with certainty who in the partnership of Bigelow and Boal took the lead in forming Will James, credit has been given to Bigelow, the first woman to win a Directors Guild of America award, and now favored to become the first to win an Oscar for directing. But no cheers for Miss Kathy for breaking the glass ceiling by fabricating my worst cinematic nightmare. Quentin Tarantino, who should know better, having just directed a piercingly original ironic study of war and blood lust, dubbed Bigelow the "Queen of Directors" when she took the DGA award. I prefer the "Transvestite of Directors." Looks to me like she's masquerading as the baddest boy on the block to win the respect of an industry still so hobbled by gender-specific tunnel vision that it has trouble admiring anything but filmmaking soaked in a reduced notion of masculinity.

OK, I see you objecting back there in the last row. Is it because Bigelow and Boal seem to think they have made an antiwar film, as they made clear when they accepted their BAFTAs (the British Academy Awards)? Something to do with an ironic presentation of Will? Uh-huh. We spend one-and-a-half hours enduring crisis after crisis in which Will is the only person with the daring and skill to save us (since we identify with the American soldiers) from being blown to bits. We hover over him anxiously, for seemingly endless stretches of time, watching (beautiful) extreme close-ups of his skillful and steady fingers palpating wires and wielding wire-cutters, our vicarious lives hanging on each motion. Our field of vision is so completely limited to his expertise in defusing bombs and dealing with invisible enemies that our capacity to think about the larger context of the American presence in Iraq is replaced by nuance-free instincts more characteristic of the tea party movement. This is likely to distance us from this man sufficiently to criticize him, how?

When Will returns home briefly, his wife and child are rendered clichés, as is ordinary American life, summed up in this film by the consumer madness embodied in the ridiculous proliferation of products in the cereal section of a supermarket. He's happy to go back to the bombs. I don't buy this as ironic -- or valid. Apparently neither do a number of vets, who contend that "The Hurt Locker" has falsified the Iraq experience. Writing in the Huffington Post, Iraq veteran Kate Hoit takes aim at the film as "a full-throttle adrenaline rush that is comprised of ditching common sense and the realities of war" and calls its action climax "pure magical bullshit." Seems that at least one real woman who served in Iraq is not pleased with Bigelow's approach to her story. And how about the way Will's wife is robbed of a point of view by a woman director? (If Bigelow didn't intend all the hyped-up admiration of Will, then her material got away from her -- in a big way.)

I also have a hard time with Will's relationship with Beckham (Christopher Sayegh), a young Iraqi boy who sells bad DVDs to American soldiers. Because he likes Beckham so much, Will gets one of his fellow American soldiers badly shot up trying to avenge what he thinks is the boy's horrible death -- before he discovers that the Iraqi boy is alive. D'oh, he has misidentified the corpse. And he joyously embraces the living child ... No, he doesn't. He renders himself superhuman by cutting himself off from the kid because -- see? -- this is where caring gets you. And this is why he prefers "just one thing" to his family! Will is depicted as a majestically manly man in comparison with the merely human Sgt. Sanborn (Anthony Mackie) at his side, who, shattered by his war experiences, takes the lesson from war that he wants a son.

Yep, Bigelow produces some glorious montages and shots, like the spare geometry of the almost completely white film frames in the army morgue. But I think the outsize admiration for her masterly technique and the summary dismissal in the current buzz of directors like Nora Ephron and Nancy Meyers reveal an untenable assumption that the muscular filmmaking appropriate for the fragmented, death-saturated situations of war films is innately superior to the technique appropriate to the organic, life-affirming situations of romantic comedy.

I don't begrudge the praise for Bigelow's depiction of urban war violence, but why the general opinion that Ephron and Meyers aren't up to much because they don't use hand-held cameras and flashy cuts that tensely survey an inscrutable environment? That's not their material. Why isn't there also some praise for Ephron, for example, for the scenes in "Julie & Julia" that capture the love of life conveyed by Meryl Streep in her celebrated performance as Julia Child? When Julia and her sister, reunited in a Paris train station, run toward each other, so adorably full of affection they don't care about their resemblance to two lurching cows high on jouissance grass, does anyone think that incandescent moment was achieved only by acting? That the director's framing of the scene had nothing to do with it?

I'm talking about the way the Hollywood machine doggedly preserves the hierarchy of men above women, and the military landscape above the domestic landscape, even when it's a woman who directs a war picture. (And often even when men direct rom-coms.) And I'm baffled by how this entrenched prejudice has managed to produce the unfathomably widespread belief that Bigelow's technically praiseworthy valentine to an emotionally challenged war addict strikes a blow for peace.