In the Vancouver games, where much is uncertain, one phrase is getting a serious workout 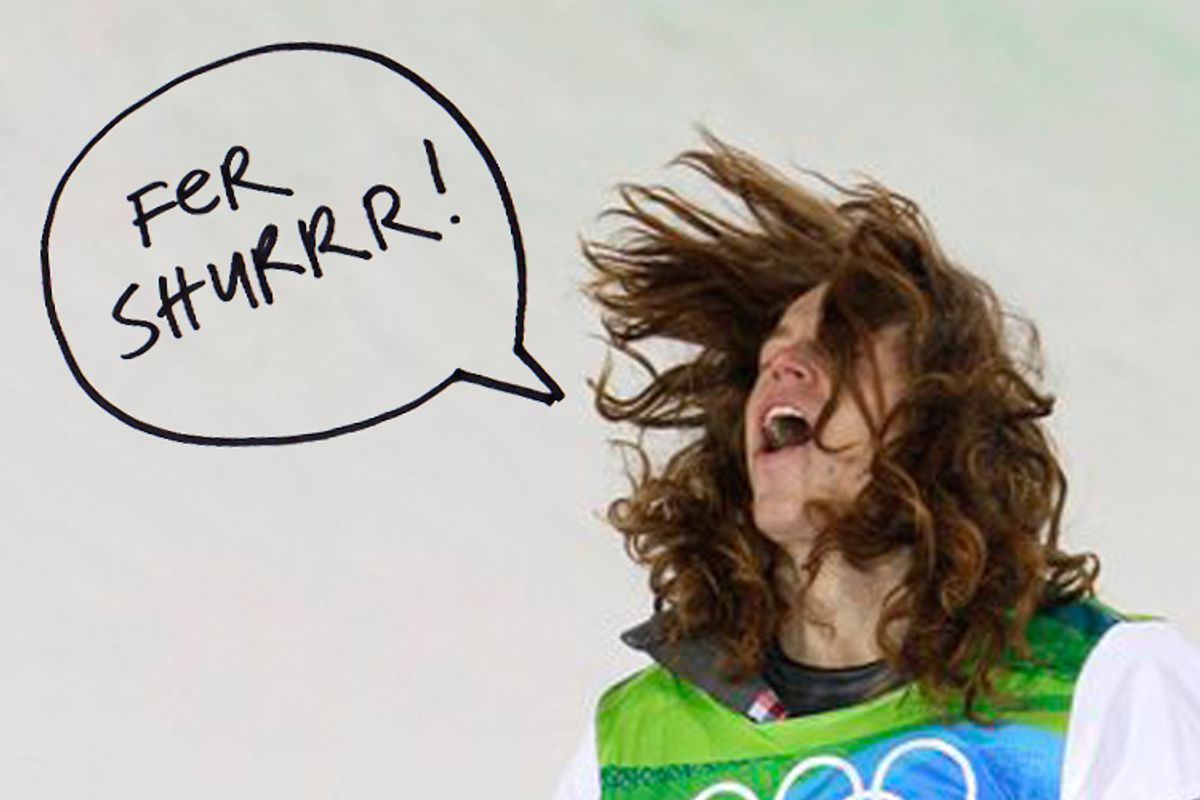 In the Vancouver Games, nothing is certain. Torchbearers are left stranded by malfunctioning cauldrons, fans find themselves sinking between giant hay bales in the melting snow, and lugers, already fearing for their lives, must contend with faulty spigots spraying the course with water. "To what extent are we just lemmings that they just throw down a track and we're crash-test dummies?" Hannah Campbell-Pegg, an Australian luger, told reporters, articulating the sense of dread that has pervaded the Glitch Games. But amid the chaos and unpredictability, one thing is for sure: Athletes and their cohorts have made constant use of the phrase "for sure."

"For sure" is nothing new, of course. It's been around since the 1580s, arriving after the expression "sure enough" and before "sure-footed," which, sadly, never really caught on. Today it is associated with groovy Californian optimism ("Fer shurr, dude!"), and tends to pepper the speech of Gen Y'ers, the demographic most represented at the Vancouver Games. But the frequency with which Olympic competitors, coaches and officials have been saying "for sure" lately suggests it is more than a meaningless verbal tic.

"The use of 'for sure' is very interesting," George Lakoff, a professor of linguistics at the University of California, Berkeley, said in a phone interview. "'For sure' is an idiom, not a literal phrase. It doesn't automatically mean 'surely.' It's usually an attempt to modify the rest of a sentence, and tends to rise in conditions of uncertainty, particularly in relation to future situations where the outcome is unknown."

Hence the popularity of "for sure" at the Winter Games, where much is unknown and yet certainty demanded. The odd juxtaposition can create a confusing contradiction, in which a speaker is for sure about something they think. "I thought I was in control for sure," said Mike Robertson, a member of Canada's snowboard team, after ceding the gold medal to American Seth Wescott. "I think for sure he will get at least one medal," said Norwegian biathlete Ole Einar Bjorndalen about his rival, American biathlete Tim Burke. "I think [the course] was acceptable, for sure," said women's race director Atle Skaardal, in what looks like a last-second attempt to mask her displeasure with the slushy, weather-beaten course.

The Olympics are obviously a stressful and demanding affair. For two weeks every four years, otherwise obscure athletes become both our national ambassadors and the avatars through which we experience strange sporting events like skeleton or short-track speed skating. There's a tacit obligation to be positive and "for sure" about things -- to make one's country proud, but also to reduce one's own fear and anxiety. Faced with the ambiguity of the Winter Games, though, appearing confident is not so simple -- even, and perhaps especially, for athletes' elected spokesmen.

Take Thomas Vonn, the voluble coach and husband of Lindsey Vonn. "It is entirely possible that she could race in all five events and be fine," he said on Feb. 10, three days before the Games. "It is possible, for sure." Two days later, with postponements to the downhill and super-combined affording Lindsey's shin time to heal, he said, "This helps us, that's for sure." But by Feb. 17, the postponements had become rampant and disorienting: "It's getting ridiculous, for sure." And finally, on Feb 18, after Vonn failed to finish the super-combined: "Nothing is for sure, one way or another ... anything can change in 10 minutes."

The context of these statements is important. Vonn, with privileged access to the state of his wife's health, was being pressured by reporters from the New York Times, the Washington Post and the Associated Press to make predictions about her ability to race. So Vonn, in a valiant effort, expressed his certainty that it was possible, before finally breaking down and conceding that it was anyone's guess.

Other athletes and their coaches, under less intense media scrutiny, have employed "for sure" to stress the obvious, in order to sidestep more speculative predictions. "If there's snow we'll ski for sure," as U.S. mogul skier Patrick Deneen said. "Injuries [don't] make you faster, for sure," said German women's ski team coach Matthias Berthold, on racer Maria Riesch's debilitating injuries. "She's going to be sore, that's for sure," said U.S. women's ski coach Jim Tracy, after racer Tracy Cook crashed into the safety netting in the downhill at 70 mph.

But occasionally athletes get trapped in uncomfortable situations, whereupon "for sure" becomes a handy verbal dodge. For example, when Norwegian Alpine skier Aksel Lund Svindal was asked to speculate on the unpredictability of Bode Miller (that is, before he surprised everyone by staying out of the bars and winning three medals), he replied: "[Bode is] amazingly gifted and I'm sure we'll see some great runs from him ... But at the same time, I'm not sure we'll know what to expect from him week to week ... But for sure, he'll be someone that people will watch because you never know with him."

Considering the harried navigation such questions require, you can almost hear the relief that comes over athletes when asked not for predictions but for how they feel about something. (At last, a no-brainer!) For example:

How did Lindsey Vonn feel about an Austrian newspaper calling her "heavy"? "As a woman, I want to drop the subject, but I used it as motivation, that's for sure."

How does Mellisa Hollingsworth, the 39-year-old Canadian skeleton racer, feel after years of slamming her head on the ice? "My memory isn't quite as good as it used to be, for sure."

How did U.S. mogul skier Hannah Kearney feel about learning backflips? "I don't know if it's a phobia exactly, but it's something I was uninterested in, that's for sure."

How does Mark Grimmette, the American luge veteran, feel about the death of Georgian luger Nodar Kumaritashvili? "It's something I'll never forget, that's for sure."

On this subject, athletes could learn a few lessons from politicians, experts at projecting certainty under the foggiest of circumstances. "I don't claim to know all the technical details," Mikheil Saakashvili, the president of Georgia, said in the wake of Kumaritashvili's crash. "But one thing I know for sure, that no sports mistake is supposed to lead to a death." In this crafty usage, Mr. Saakashvili succeeds in casting blame on Olympic officials, causing us to overlook the fact that, although such mistakes aren't supposed to be fatal, this is the inherent risk that all athletes run in today's Winter Games. After all, if we allowed Olympians to contemplate the great unknowns for too long, we'd have a lot less Winter Games, that's for sure.