The GOP's path to the future runs through the past

Why are Republicans running so many candidates who served in Congress or the Bush administration already? 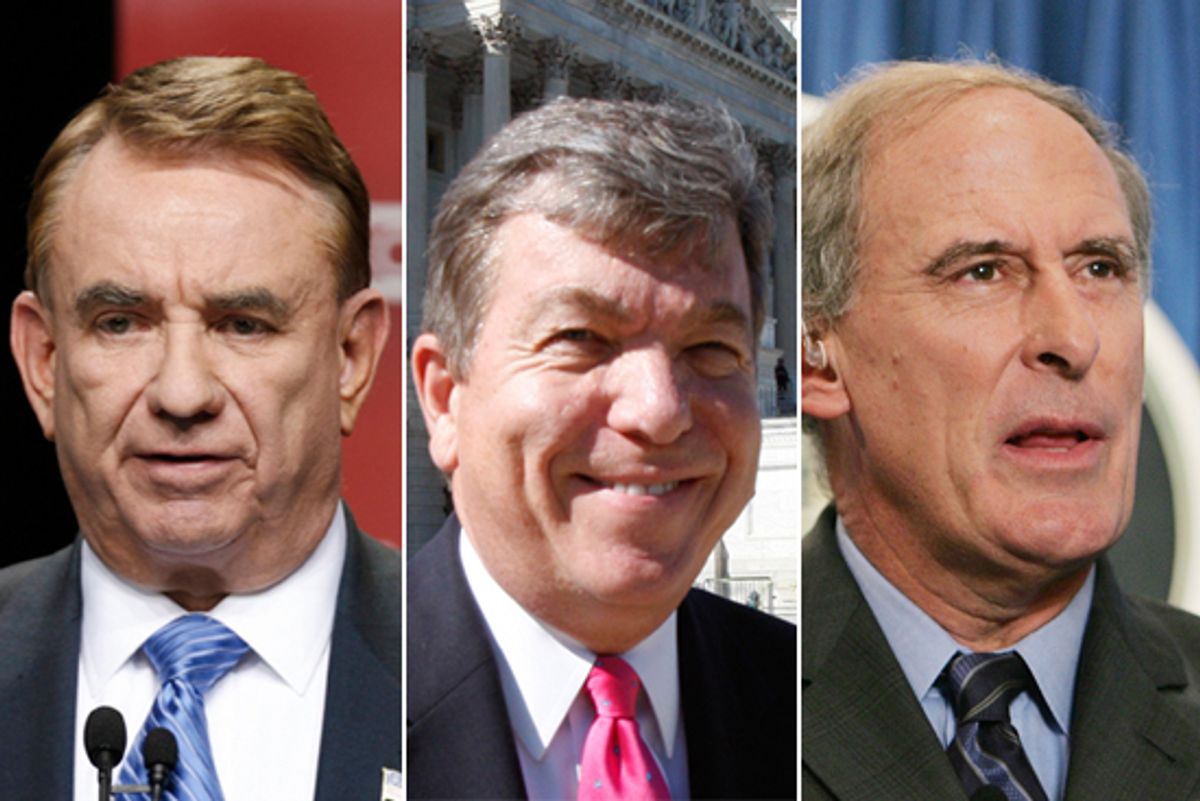 For weeks, Democrats have heaped loving attention on Dan Coats, the former Indiana senator-turned-lobbyist, who contemplated moving to North Carolina before he decided to leave northern Virginia and try to get his old job back again. But he's not alone.

There's also Rob Portman, running for the Senate in Ohio -- and last seen as George W. Bush's budget director, after 12 years in Congress that began right around the time of the GOP's 1994 revolution. Republicans are trying to get former Gov. Tommy Thompson, another Bush Cabinet veteran, to run for the Senate from Wisconsin. In Missouri, their guy is Roy Blunt, who only stepped down as a member of the House Republican leadership after the party was routed in the 2008 elections. In Delaware, Mike Castle would be a fresh face in the Senate, except that he's represented the entire state in the House since 1993. There's also Charlie Bass, Steve Pearce or the other six former House Republicans who are at least considering running for seats they've already held once before.

In a year where the most dangerous word on a politician's résumé might be "Washington," the fact that Republicans are turning, in so many places, to people voters have known for years has some Democrats hoping November's GOP wave may not be quite so strong. After all, seizing the message of "change" away from President Obama when you were one of the guys voters wanted a change from in the first place could be a tough trick to pull off.

"Because Democrats are in control, most of the focus has been, 'This is hurting Democrats,' and I understand that there's a reality to that," said Democratic pollster John Anzalone, who called some of the GOP's prime recruits "retreads." "But the other story is [voters are] not happy with Republicans. They're not in a good position to take advantage of it" with candidates who've already had a shot. "The reality is that they still have to answer to all the Bush economic policy votes that got 'em into trouble to begin with."

Reminding voters how little they liked Republican ideas, before they started to sour on Democratic control as well, will probably be the most potent weapon Democrats have in some of these races. So Democratic strategists are planning to hammer the GOP's rerun candidates with old votes, old statements and old policies. "Voters are hungry for something new, but Republicans are only offering yesterday's leftovers," said Democratic Senatorial Campaign Committee spokesman Eric Schultz. "Roy Blunt, Rob Portman, Rob Simmons, Mike Castle are not agents of change -- they are the faces of the Washington Republican establishment. In November, voters will face a choice between continuing to make progress, or returning to the failed economic policies of the past, and nobody embodies those policies more than this year's Republican Senate candidates."

That's clearly part "glass-half-full" optimism on the part of Democrats. "As evidenced by the GOP victories in Virginia, New Jersey and Massachusetts, coupled with numerous polls showing Republicans now ahead in seven Democrat-controlled Senate seats, it’s clear the wind is at our backs," National Republican Senatorial Committee spokesman Brian Walsh said. "There’s no question that both parties need to do more to earn back the trust of voters, particularly independents, and whichever party makes clear that they are the ones listening and responding to voters' concerns will win in November. But the Democrats’ spin that certain states favor them because of particular candidates is simply bizarre."

The GOP establishment in Washington loves candidates like Coats, or Blunt or Portman, because their background makes them seem instantly credible with other political insiders. (Can they win that race? Of course -- they've already done it!) That helps open the door to early fundraising and buzz from inside-the-Beltway media outlets. Persuading veterans to come back for another shot is seen as a recruiting coup.

The GOP plan now involves playing on anger about the debt, concern about the direction of the nation and frustration that Obama hasn't delivered on campaign promises. "The folks that aren't of Washington can have a very strong case to make that argument," GOP strategist Kevin Madden said. "The 'throw the bums out that are there now' mentality -- that dynamic, I think, is going to affect Democrats much more than us."

The problem for retread Republicans, though, is that their own credentials make it harder to ride that particular message. A recent New York Times/CBS poll found voters still blame George W. Bush, not Obama, for the economy -- with 31 percent saying Bush was at fault, and only 7 percent blaming Obama -- even though Obama's job approval rating was a dismal 46 percent, which tied the lowest rating he's ever gotten in that survey. Meanwhile, the poll found only 8 percent of voters thought most members of Congress deserve to be reelected -- indicating the climate is bad for all incumbents. That obviously hurts Democrats more, since there are more Democratic incumbents. But it may also mean voters won't be swept away by familiar faces.

And not all Republicans are convinced that the path back to power in November runs through the past. "It's a terrible time to be running from Washington or coming from Washington," said Indiana state Sen. Marlin Stutzman, a Republican who's running against Coats in the GOP's May 4 primary. "The climate is just horrible." In Indiana, Democrats are likely to run their own candidate who's been around for a while -- either Rep. Brad Ellsworth or Rep. Baron Hill. Making a "change" argument against either of them would be easier for a fresh face, Stutzman says -- admittedly, more than a little self-servingly. "We've traveled over 20,000 miles within the state of Indiana over the last year campaigning, and people are not interested in Washington insiders or Washington politicians," he said. "When people have been to Washington, the words that we're hearing are, 'They've had their chance.'"

If Democrats can make the election into a choice between GOP policies voters rejected already and their own efforts to move things ahead, albeit imperfectly, they may have a chance at holding on to the majority in both the House and the Senate. And there's still time to sharpen that message before November. "Right now, [voters] are just interested in punishing Democrats for not getting the job done, and in some cases, doing the job badly," said Democratic pollster Stan Greenberg, who advised Bill Clinton during the 1994 elections, when Republicans took Congress. "As you move closer to the election, this election will become a choice. Right now, it is solely about performance ... These members who are coming back, who went off and became lobbyists -- the country does not want lobbyists back. They're not looking for more Wall Street influence."