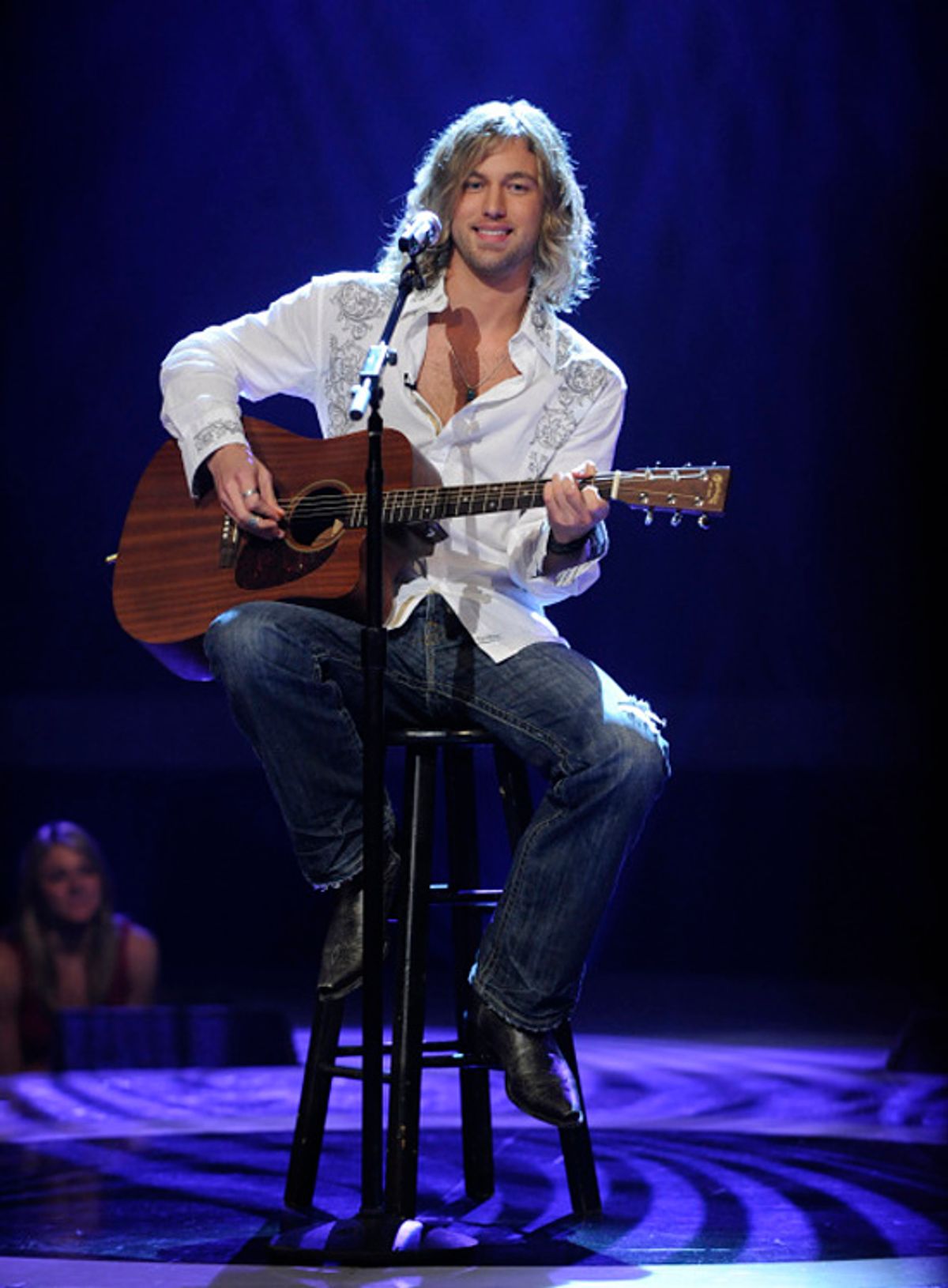 "American Idol" was on a real streak last night, when the top 12 guys took their turn before the judges. A losing streak. Simon was on his own kind of streak. His brutal yet honest words blazed trails of sorrow for the male contestants.

Grab some coffee because you're gonna need it to read this sleep inducing recap. But first things first. Thank God Ellen's hair got fixed! She was so much more herself. Gone was the nervous twitch…Ellen was back!

While Ellen's nerves were calm, Simon decided to step up the pressure for the already petrified contestants. "If you lose it tonight or if you forget the words, your career is over."

Todrick Hall: Todrick was the writer, actor and dancer who performed with Fantasia on Broadway. He had a great presence and started off with charisma and charm. That was short-lived. In the middle of the song, he went flat and pitchy.

Simon: "I think you came over as a dancer trying to sing rather than a singer trying to dance. I'm all for taking risks providing you can improve it, but what you did was murder the song. It was verging on stupid what you just did."

Simon was not messing around and was being a bit overdramatic. MURDER the song? It wasn't that bad.

Aaron Kelly: Aaron, a young, goofy-looking kid who looked so young you would swear he's still nursing, sang a country ballad and lost me immediately. It was as if Aaron was dragging, pulling and lugging the song across the stage.

Apparently Aaron hadn't watched the strict admonition given to 17-year-old Katie Stevens the night before. The song was too old for him. "Come on, kid!  Be a kid!" I wanted to scream.

Simon: "Bearing in mind that it was your first live show, it was quite a good performance. You look as if you are embarrassed to be here and you're not even confident enough to know why you're here. You're a good singer, very likeable, very cute. You need to take control of the song. Absolutely 100% you'll be here next week."

I was crestfallen. My first disagreement with Simon this season. But that too was short-lived.

Jermaine Sellers: I was distracted by Jermaine's rapper wedding outfit. But hey, you had to love his voice, so soulful and beautiful. I had goose bumps.

Ellen picked up on Jermaine's outfit and said, "I love your look." Yeah, duh! He was dressed just like her!

Simon: "Look, it's the kind of song that if you were playing piano in a cocktail bar, someone in their 50s would request that song. You have totally blown your opportunity here."

Whoa, a double whammy! Simon just insulted Jermaine AND me. I would never ask to hear that song!

Tim Urban: Tim had been told to go home, but thanks to his good fortune that Chris Golightly had been disqualified due to a contract with a band, he was called up and brought back on the show. Tim felt incredibly blessed. It was short-lived.

Tim sang "Apologize,"and after he finished the song, he should have made an apology to the entire country for subjecting us to his terrible song. However, there was one distinguishing factor you should know about Tim: He was ADORABLE!  Just ask Ellen and Kara.

Simon: "We made the right decision by not putting you through the first time. There was nothing, nothing to take from that. The vocals were weak, you don't have the presence."

If Tim makes it through, it will be because of all the tweens with the cell phones that have become a sixth digit on their hand, because remember, HE WAS ADORABLE!

Joe Munoz: Joe sang yet another slow song. I liked his voice and his song choice. But he sounded a little off, weak and a little shaky. I could swear I saw his knees shaking. Can you blame him? Simon was about to give him feedback.

Simon: "Look, it's very important that with this show you have to get out of the bubble. This competition can actually find stars that will sell records all over the world. You gave a safe, forgettable performance It was limp and forgettable, rather like our host."

Wow, Simon slipped in a low blow to clueless Ryan.

Simon: "Look, okay, the plus side: People are going to remember that performance. The down side, they will remember it partly for the wrong reasons. My issue with you is that you come off as someone who's attended 'pretend rock star school.'  You were a cliché."

Lee Dewyze: Lee had a Bruce Springsteen kind of voice. Lee was more successful than the others, but that wasn't saying much.

Randy and Kara thought it was less than stellar. Simon pulled rank and said, "I thought this was the best performance so far. This guy is a naturally good singer. You're going to do really well in this competition."

A solid endorsement from Simon? This was Dewyze's lucky night because he really wasn't all that.

John Park: Besides wanting to marry Shania Twain (this should have automatically disqualified him), John sang, "God Bless the Child." John had a great voice with an open and friendly face, but the song was boring.

Simon: "John, you have got to have an incredible voice to take on that song and you haven't. It came off as very flat and zero emotion. It was a pointless song."

Michael Lynche: "Big Mike" was the new dad who missed the birth of his child. Big Mike sang a small song. My mind wandered during his performance. Big Mike was underwhelming.

Uh oh. Simon once again looked annoyed. Although Ellen, Randy and Kara kind of praised Big Mike because he "had a good story," Simon gave BM the hard facts: "What they are really trying to say to you was that you were like the support act before the main act. You're a big guy with a big heart who delivered so little."

Ellen insisted his story would carry him through. I was callous and didn't care about "his story." Can America please lose its attachment to the sob stories? Single mothers, grandmas with Alzheimer's, homeless street performers, bad teeth, and fathers that miss the birth of their children. Get in line, people! Everyone has a story these days!

After hearing his song, I understood why Mary Powers was yelling at him. He definitely was the weakest link. How did this guy get this far? How did he get past the Simon talent meter? Even the audience had a hard time clapping.

Casey James:  FINALLY the moment Kara had been waiting for. Kara, eyes transfixed on Casey, was in a love trance.

Casey was cool as a cucumber. He had a charming, sexy smile when he sang, great eyes and I believed him. I can't remember what he sang, but I really believed him.

Kara was having a hot flash. She gushed, "Casey, I don't recognize you with your shirt on. It was hard for me to listen to, I'm married, honey, I love you, but it got a little pitchy when you were holding me in your arms." Ellen added, "I could feel Kara undressing you with her eyes.  You're gonna get votes like crazy. It doesn't matter how you sang."

Unfortunately, I didn't have a barf bag handy and had to take a quick bathroom break. My relief was short lived when Kara added, "Seriously, you, Casey, are eye candy and you are ear candy. " Kara needed a cold shower and a marriage counselor. (I'm available.)

Simon: "Casey, we both were cursed with good looks. Somehow you have to manage the talent thing as well. What I liked about you today was you chose the right song, you were very honest, very sincere, very likeable and obviously the cougar here loves you."

Andrew Garcia: Andrew had been a fan favorite since his rendition of "Straight Up"during the auditions. He sang some kind of song about sugar, and I really liked him. I liked his mellow and distinctive way of singing.

Simon: "Andrew, I was looking forward to hearing you more than anyone else but I was disappointed. Tonight you didn't take a risk.  You have a great story [there we go again with the story] and you have a really really fantastic recording voice, but I'm really disappointed with that. You've got to do better than that.”

All in all, the guys had a so-so night and lost a golden opportunity to make the women look really bad. Pretty much everybody looked bad.

My prediction for who's going home? Tim Urban and Alex Lambert.

The results show is tomorrow night, and for that you're on your own. I've got some other important shows to watch: "The Marriage Ref" with Alex Baldwin (this screams disaster) and "Survivor: Heroes vs. Villains" (even more disaster).