Ignorant, frightened people are notoriously easy to fool. Enter Glenn Beck and a host of other fast-talkers 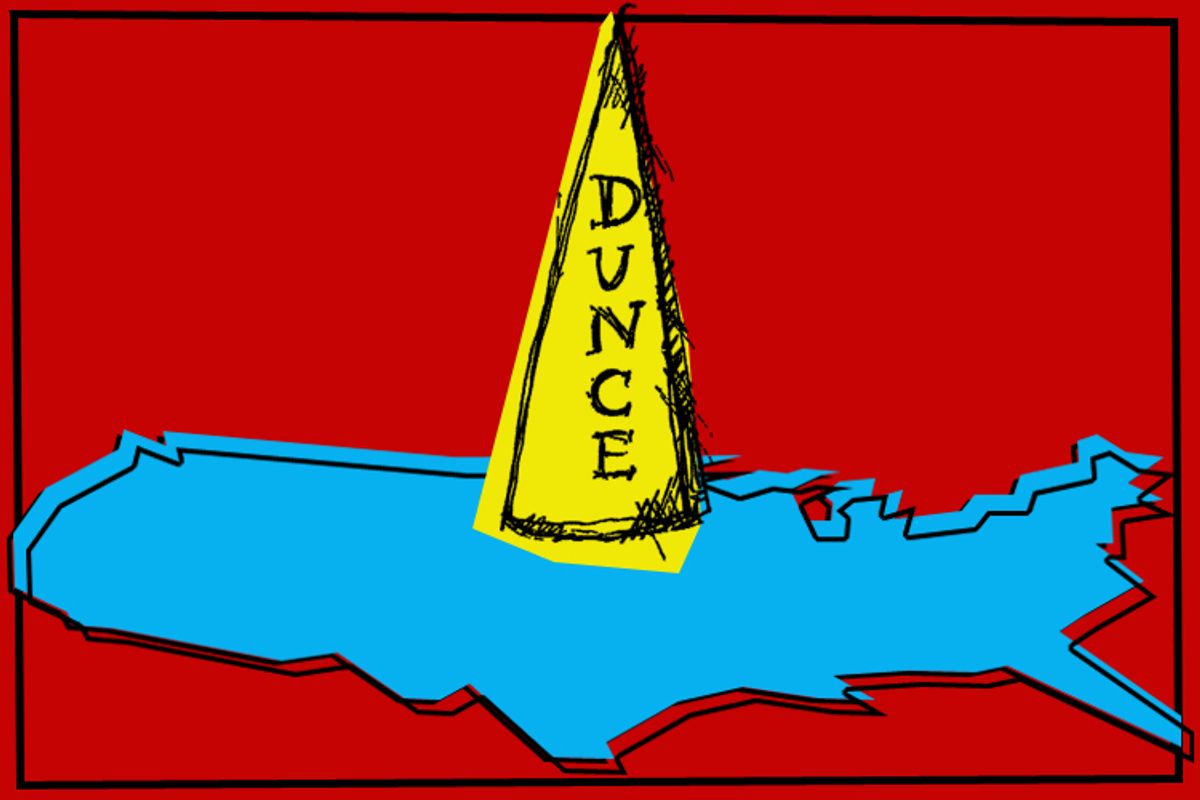 The first great rule followed by all American politicians and most journalists is to flatter the people about how smart and savvy they are. The reality, of course, is that much of the electorate is so poorly informed that it's a wonder our political system works as well as it does, which many think is hardly at all.

Last week, CNN released a poll showing that 86 percent of Americans believe the U.S. government is "broken." I admit my first reaction was to wonder subversively, "How would they know?" A contemporaneous Pew survey of the public's "political news IQ" showed that on one of the most heavily reported issues of 2009-10, only 32 percent knew that the Senate healthcare bill passed without a single Republican vote; 26 percent understood that a supermajority of 60 votes is required to break a GOP filibuster.

In short, they haven't got a clue.

"Democracy," H.L. Mencken wrote, "is the theory that the common people know what they want and deserve to get it good and hard." Back in early 2003, with war fever against Iraq heating up, another survey showed that something like 19 percent of Americans could locate that nation on a world map. No wonder the Bush administration found it easy to persuade two-thirds of the population that Saddam Hussein masterminded the 9/11 attacks. He was the designated villain destined to confront Bruce Willis in hand-to-hand combat at the end of the movie, was he not?

Surveys like CNN's are basically marketing tools. To about half of the 86 percent, government is "broken" because their side lost the last election. To others, because somebody close to them lost his job. News networks promote the idea of "crisis" as a ratings builder. Otherwise, viewers might be tempted to watch basketball on ESPN -- where nobody pretends to take seriously the opinions of fans unfamiliar with zone versus man-to-man defenses.

Ignorant, frightened people are notoriously easy to fool. Manipulated by demagogues who assure them of their innocence and wisdom, in troubled times they're tempted by conspiracy theories and miracle cures. So it is with many citizens interviewed in New York Times reporter David Barstow's extraordinarily revealing article "Tea Party Lights Fuse for Rebellion on Right."

After months of attending meetings and interviewing tea party members across the country, Barstow describes a movement "led by political neophytes who prize independence and tell strikingly similar stories of having been awakened by the recession. Their families upended by lost jobs, foreclosed homes and depleted retirement funds, they said they wanted to know why it happened and whom to blame."

Enter Glenn Beck, the fervid Fox News talker oddly fixated upon President Woodrow Wilson, "an evil S.O.B." who gave us the "blatantly unconstitutional" income tax in 1913. Never mind that the law was specifically enabled by the 16th Amendment, enacted and ratified under Wilson's GOP predecessor, William Howard Taft. To the former drive-time DJ's enraptured listeners, it's evidence of a worldwide conspiracy against people like them.

Enter a host of fast-talking buncombe artists. "It is a sprawling rebellion," Barstow writes, "but running through it is a narrative of impending tyranny ... from the concern that the community organization Acorn is stealing elections to the belief that Mr. Obama is trying to control the Internet and restrict gun ownership.

"WorldNetDaily.com trumpets 'exclusives' reporting that the Army is seeking 'Internment/Resettlement' specialists. On ResistNet.com, bloggers warn that Mr. Obama is trying to convert Interpol, the international police organization, into his personal police force. They call on 'fellow Patriots' to 'grab their guns.'"

Some are mobilizing citizen militias behind a former Arizona sheriff who promises to save the nation from "utter despotism." Barstow interviewed earnest grandmothers who spoke melodramatically about giving their lives for their country. "Members of her family," one acknowledged, "think she has disappeared down a rabbit hole of conspiracy theories."

Well, it's up to the poor woman's family to do an intervention, isn't it? What we have here is less a political than a community mental-health problem. We've seen it all before. Paranoia blooms whenever Democrats take power in Washington. Remember militiamen fearful of U.N. black helicopters during Bill Clinton's first term? Remember "backward masking"? Procter & Gamble accused of Satanism? Same thing. To an excitable minority, particularly in the South and intermountain West, apocalyptic fads are encoded in their religious DNA.

For the Obama administration, the best policy is steady as she goes. As Charles Mackay put it as long ago as 1841, "Men ... go mad in herds, while they only recover their senses slowly, and one by one." As the economy gradually improves, Interpol cops fail to appear, guns aren't confiscated, the Internet percolates along and internment camps fail to materialize, most tea partiers will gravitate quietly back to TV evangelists and conservative Republicanism.

After all, these fantasies aren't the kinds of things anybody wants to talk about at work.