A tale of two healthcare summits 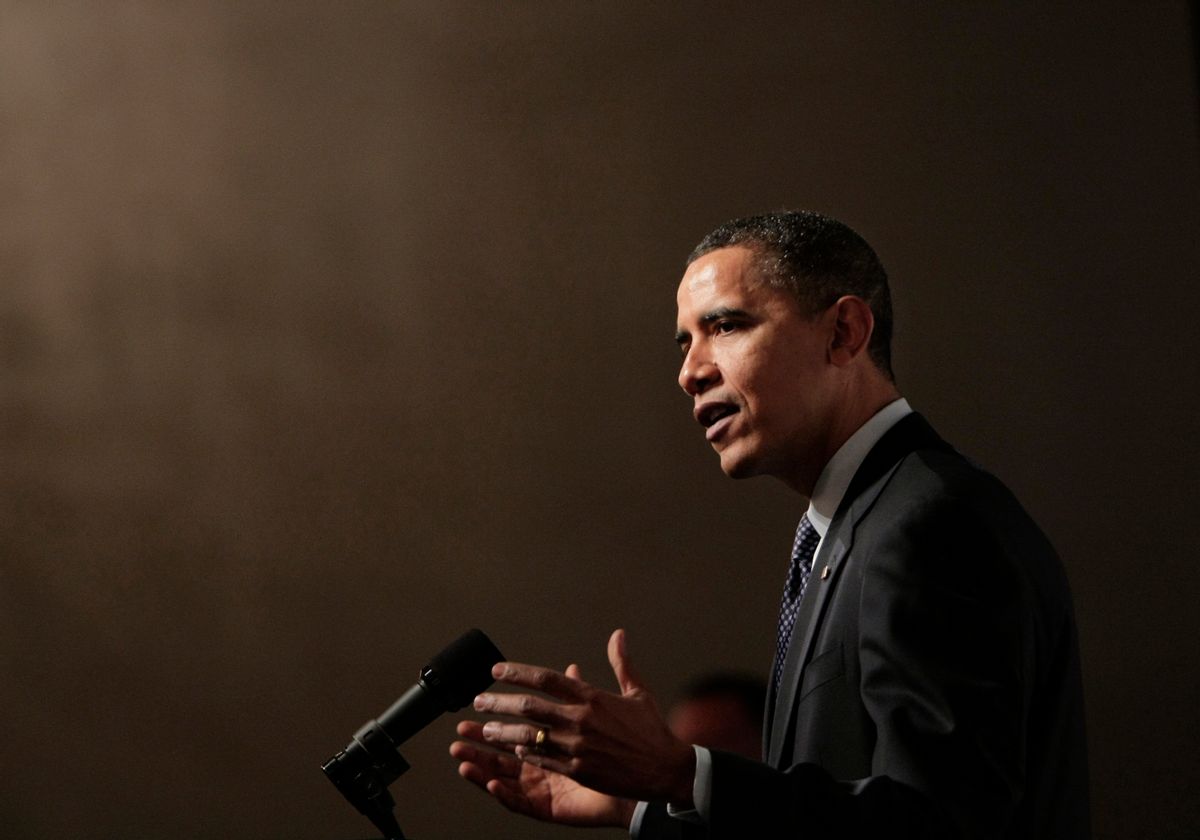 President Barack Obama discusses the economy with the Business Roundtable as they meet at the St. Regis Hotel in Washington, Wednesday, Feb. 24, 2010. Business Roundtable is an association of chief executive officers of leading U.S. companies that comprise nearly a third of the total value of the U.S. stock markets with nearly $6 trillion in annual revenues and more than 12 million employees. (AP Photo/J. Scott Applewhite) (Associated Press)
--

Just shy of a year ago, President Obama gathered all the major political players on healthcare policy -- from doctors to insurers to hospitals, to business owners and unions, and lawmakers -- in the East Room of the White House to kick off his push to pass a reform bill. It was a jolly affair; the official transcript is dotted with "(Laughter)" and "(Applause)."

And if the mood in the room wasn't exactly cheerful, at least it wasn't -- as it has been lately around the healthcare reform effort -- completely despondent.

About 50 weeks later, Thursday's version of the healthcare summit will be a lot less jolly. The only people coming to the party will be lawmakers, a handful of each from the House and Senate Democratic and Republican rosters. (The lobbyists have long since retreated out of sight to private meetings in Capitol Hill office suites, but at this point, the lawmakers are the only ones with work left to do on the bill.) The goal, White House allies say, is basically to underscore one final time how utterly unhelpful the GOP has been since last summer, when Republicans decided to let Democrats carry the healthcare bill -- or watch it fail -- all on their own.

"It will show that there are really two choices," said Ron Pollack, executive director of Families USA, a healthcare advocacy group that's been working with the administration and with industry lobbyists to shape the bill. "Doing nothing, which comes with a huge cost for families and business; or passing reform similar to what the president has proposed ... This is going to galvanize Democrats to move forward, as it becomes absolutely clear -- if it wasn't clear before -- that there's only one choice in terms of how to proceed."

Meanwhile, Republicans, who are showing up a little grudgingly, say the whole thing is a sham, set up to shove a bill the public doesn't want through a tortured endgame. (Even if, as Democratic pollsters point out, the specific proposals in the bill are more popular than the overall notion of healthcare reform.) "Tomorrow's summit is looking more and more like a taxpayer-funded media event designed to set up passage of ObamaCare 2.0," said Rep. Mike Pence, R-Ind., the GOP's third-ranking leader -- who isn't coming, but will be part of a "Truth Squad" House Republicans have set up for the summit. (For that matter, Vice President Biden appears to agree; he told the Wilmington, Del., News Journal the summit "could be pure theater" and "could end up not being good.")

But a year after the first summit, that the White House felt the need for yet another gathering to talk more about the bill is striking. Looking back, some Democrats wish they'd played the issue differently, finding some way to avoid getting bogged down in the summer and fall, when their messaging fell victim to tea party protests and endless Senate negotiations. "In retrospect, yeah, we probably should have just gone with a bill in reconciliation," said Sen. Tom Harkin, D-Iowa, the chairman of the Senate Health, Education, Labor and Pensions Committee. "But I think Obama operated in good faith, that he wanted the legislative process to work openly and as we've done in the distant past."

House Democrats are united in blaming the Senate for the mess the bill fell into last year -- though that's in part because House Democrats are also united in their disgust that they're going to have to vote for the Senate's version of the legislation in order to pass it. "What you saw in the Senate was, this sort of evolved into a long discussion about process, and we lost focus on the product for healthcare and health insurance reform," Rep. George Miller, D-Calif., the chairman of the House Education and Welfare Committee, told Salon. "And now what this summit allows us to do is to refocus on what this legislation offers to the American people."

But even the House didn't pass its bill until November. And once it became clear, after August, that Republicans weren't going to sign up for bipartisan legislation, Democrats had to work painstakingly to find 60 votes. Aides point out, though, they didn't even control a filibuster-proof majority until July, when Minnesota Sen. Al Franken was finally seated.

The White House takes some blame, too, for letting arguments about process -- and an admittedly ugly sausage-making battle -- drown out what the legislation would do substantively. (If you've forgotten: It would ban insurers from denying coverage to people with preexisting coverage; set up exchanges for people and businesses to buy insurance if they don't have it through larger group plans; establish subsidies for people who can't afford the coverage; and require people to have insurance.)

"People are excited now because they're finally jumping in," said one Democrat close to the healthcare legislative process, who didn't want to be identified criticizing the White House. The search for a Republican to join the bill in October, for instance, took too long, as did Senate Finance Committee chairman Max Baucus' long, ultimately pointless dance with the GOP's Chuck Grassley. "There were a lot of times where [the administration] leading with a firmer hand, like they're doing now, would have been -- could have been critical."

But other players say the White House did more behind the scenes than people realized at the time. (The administration's healthcare officials didn't respond to a request to comment on the process.) "It's possible that if the White House had gotten more engaged in the early fall, that things would have moved faster," said Richard Kirsch, the national campaign manager for Health Care for America Now, a labor-backed coalition pushing for reform. But, he added, "the White House was spending a lot of time talking to senators throughout that process." September's speech to Congress helped revive the bill, after August's combative town halls nearly killed it.

One Democrat familiar with the White House's strategy told Salon the administration could still point to plenty of accomplishments so far. "If it were easy, it would have been done in a previous administration," the strategist said, also on condition of anonymity to talk more freely about the White House's thinking. "There were two other possibilities: to send up an Obama plan at the beginning of the process; and to assume that it would get done through reconciliation, and play for reconciliation rather than the broader consensus. It is impossible to say whether either of the other approaches would have yielded a law by now, and the reality is that the House and Senate have both passed health reform (something that has never happened in any previous administration)."

Of course, none of that matters much anymore; what Democrats are focusing on now is how to move forward, not back. (If the bill winds up crashing and burning, there will be plenty of time for recriminations later.) The way forward is pretty clear: The House will have to pass the Senate bill, and then both the House and the Senate will use the budget reconciliation process to pass a measure -- which Republicans can't filibuster -- combining the two versions. That's going to take serious whipping among lawmakers who are already worried enough that the votes they took last year on healthcare could cost them their jobs.

Which is why the real audience for Thursday's summit isn't the voters -- and it's certainly not the Republicans, who are, at this point, not exactly likely to be suddenly persuaded by Obama's presentation to change their minds. The main audience is Obama's own fellow Democrats, who, by now, must have realized they're going to have to finish things up on their own if they want to move on from healthcare. "We didn't get to where we wanted to go, but I hope that we can tomorrow," said Rep. Rob Andrews, D-N.J., one of four House Democrats invited to the summit by Speaker Nancy Pelosi. "This is what democracy is supposed to look like, where every point of view is listened to -- but you make a decision. This is an issue that's been talked about for a very long time, and while the talk has gone on the problem has gotten a lot worse."