Vonn vs. Mancuso, Russia vs. Canada, hockey fans vs. NBC and other Olympic battles, real and imagined 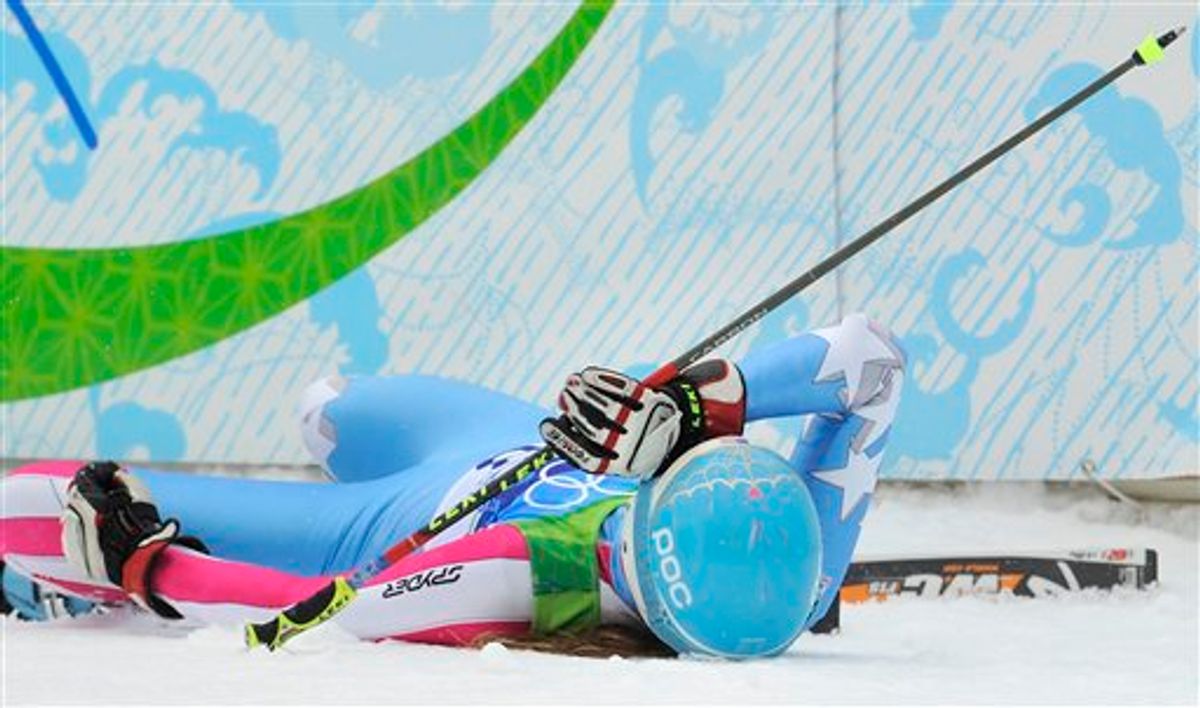 Julia Mancuso of the United States reacts in the finish area after finishing her first run of the Women's giant slalom at the Vancouver 2010 Olympics in Whistler, British Columbia, Wednesday, Feb. 24, 2010. Earlier Mancuso had to halt her first run after Lindsey Vonn crashed and was taken back up the course to start again. (AP Photo/Gero Breloer) (AP)
--

Wish I could take credit for "Slope Opera," but the term was bequeathed by giggling local newscasters. It's apparently the way we describe the rift between U.S. skiers Lindsey Vonn and Julia Mancuso. That the acrimony between Mancuso and Vonn was a local news obsession says this: We don't just watch the Olympics -- we gossip about the Olympians.

In the past we'd jingoistically worship our athletes as paragons of Protestant virtue. There's still some of that, but now they are mined for a more Greek kind of drama. The 24-hour news cycle is hungry and tiffs between our avatars spike ratings. That's just how it is.

On Wednesday, Vonn crashed spectacularly, her wipeout held up an angry Mancuso (who attempted to ski through a white vapor while Vonn lay motionless, clutching a broken finger). In the absence of medal glory we acted as though Mancuso's aggrieved tweets were a blast from Aaron Burr's gun. I don't have a problem with how the spat is covered -- just mentioning that it was different way back when, before Shaq vs. Kobe became a biblical tale of revenge and tragedy.

Another noted social phenomenon: Curling has been crazy popular these past few days. Is it due to the sport's "they're just like us!" reality TV element? Shuffleboard drunks the world over are imagining professional curling futures. Is it the sport's newfound sex appeal? Wait a second, curling now has sex appeal?

It could be the novelty factor, which is perfect for the Winter Olympics. Unlike the Summer Games, these Olympics thrive on novel. The Summer Olympics are about events so familiar, some are merely tests of what creatures tend to do (run fast, jump high). In the Winter Olympics we embrace snowboard races, speed-skating crashes, and Shaun White twirling like a moon-bound dreidel.

We still need an ancient Greek connection to embrace these newer niche sports. I'm convinced curling would get bass fishing ratings without the Olympic pageantry. There's magic in the "Olympics" label, and I love how it gives us an excuse to forge massive collective experience out of the formerly obscure.

Oh, by the way, Sweden beat Great Britain  in another hypnotizing curling match. Moving on…

Thank the lords that NBC saw fit to show us last night's marquee hockey matchup. Canada versus Russia is never to be missed, especially when Canada's hosting, and the teams are playing for Olympic survival. Yes, the game was on CNBC. And yes, the game overlapped with the mothership's showing of tape-delayed U.S. vs. Switzerland (NBC's going for that coveted "hockey lovers who don't understand things" demo). But that didn't matter once you sunk into the moment.

The stakes were high, as Canadian elimination would have cast a pall over the rest of the games. You could sense the nervous energy during warm-ups -- the crowd was uncomfortably shifting around. Then: Three Canadian goals in nine minutes. I've only seen this type of joyous release in sports movies. The Canadian faithful went from fearful to cartoonishly euphoric. It's not uncommon for a sports crowd to transition from a low to a high, but the sustained nature of this high impressed. The maple supporters kept up an eardrum-banging, protracted cheer that lasted between goals -- not just after them. The Russians looked intimidated and their star goalie Evgeni Nabokov was crushed under the weight of crowd presence. I'd like to make a joke about how Putin will disappear the Russian goalie, but on second thought, this is a legitimate concern.

The Canadian players broke Russian superstar Alex Ovechkin's stick three times, but it seemed as though the crowd's fury alone shattered Ovi's weapon. By the end, they were openly jeering Ovechkin, sarcastically singing his name as Alex nursed an injured hand. The Russians were humiliated 7-3. Pass the vodka.

As for the state of hockey race, we're into the final four: U.S. against Finland, Canada versus the scrappy Slovaks. A gold medal U.S.-Canada rematch is possible (if I hadn't just jinxed it).

NBCee it, now ya don't: Hockey

Congrats to time zones NBC deemed U.S. hockey worthy. You must feel honored, Syracuse. The classic U.S.-Canada game drew a stunning 8.2 million American viewers, despite receiving little promo, and getting unceremoniously chucked to MSNBC. NBC decided to build on this by tape-delaying yesterday's U.S.-Switzerland match in the West. I frantically sought the game, but instead I got the peacock proudly showing me a bizarre bathtub infomercial. Here's an actual quote: "The only thing it does lack is water (awkward pause). But what it does have is fabulous safety features!"

A network that lacks good programming is like a waterless tub. One that jealously guards desired programming from the people it's supposedly trying to entertain is like a leaking septic tank, left to rot in the baking sun. I'm not saying this to be snarky -- I'm genuinely incensed. It's possible the Zucker gang is plagued by an Oliver Sacks-chronicled condition -- one that impairs ability to understand time and how it relates to life (this may also explain the Conan-Leno disaster). The temporal deficiency must be to blame because I'm at a loss to understand how the world of cellphones, Twitter and Facebook has escaped network heads. It's not 1980. I will find out about your hockey game, it will not get watched, and an emotional moment will exist in an unreachable dimension. Inexcusable, especially when Canadians get to see every major event in real time.

Later that day, NBC announcers informed me that the U.S. game was "great." It's similar to the prison guard telling you about the beautiful world on the outside.

I used to have an affection for NBC sports that bordered on Pavlovian. Play a few chords of the network's old basketball theme, and out come warm NBA playoff memories of the time I snuck a portable TV into Sunday school, or the instance of my father throwing a remote at pixelized Reggie Miller. Where's pixelized Jeff Zucker? I've got a remote that's looking pretty expendable right now.

(To those who got to see a great U.S. win and don't appreciate my whining, I say this: It's indicative of a yawning viewer-network gap that's been getting corrosive of late.)

Not according to plan

I saw the German women's bobsled crash, and it was indeed a frightening sight.  I also saw the judges award China gold over South Korea in the women's 3,000 meter short track (based on a questionable disqualification).  Both situations were disasters based on your perspective.

This video of the Norwegian ski team dancing to "Beat It" is a must view.  Enjoy it while we're still in that weird Winter Olympics zone: