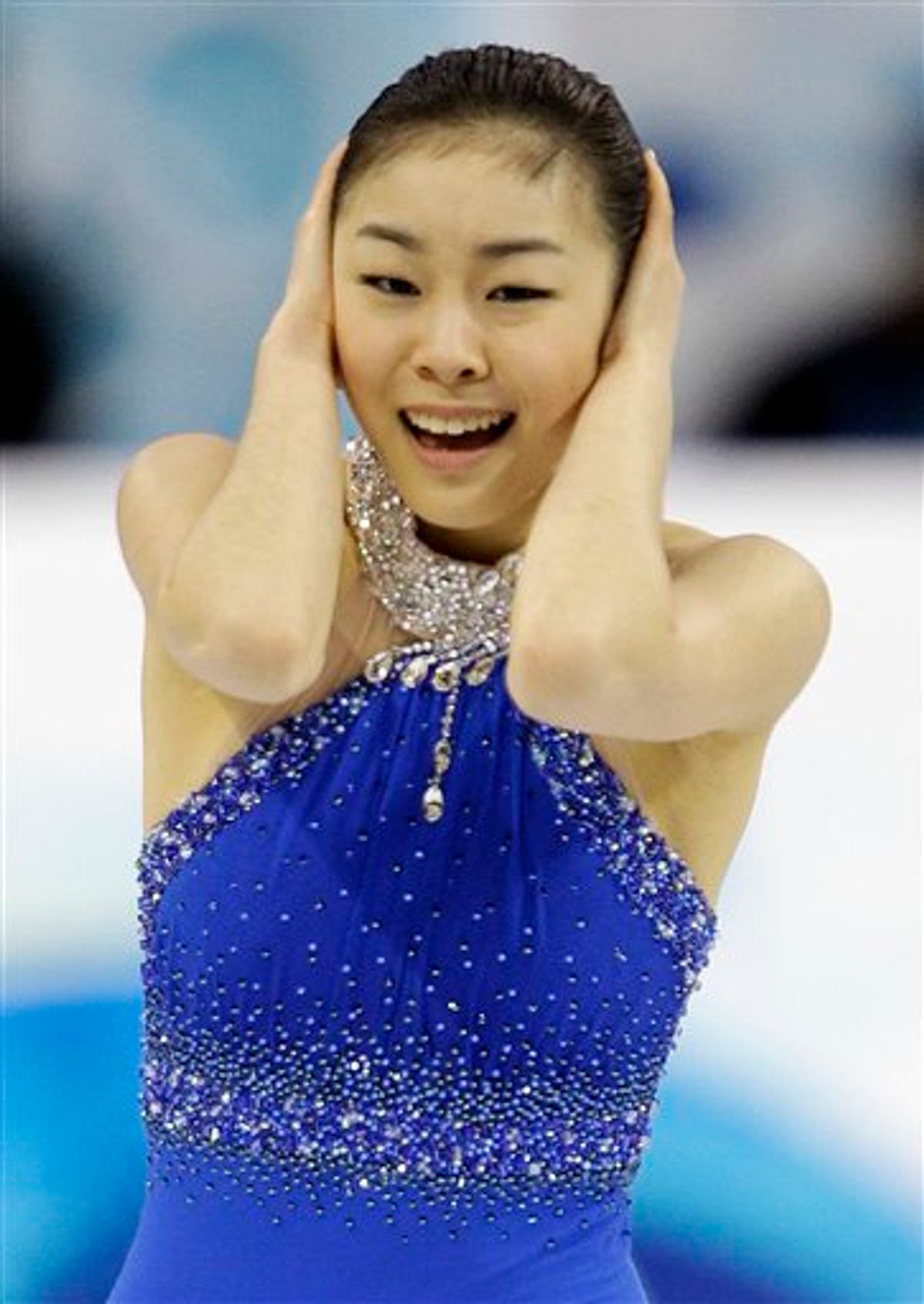 Are skin-colored skates tacky? Is the double hang-dog reversal an aerial freestyle move, or a maneuver performed by a chastened downhill skier regretting her somewhat envious remarks? Would South Korea's figure skating favorite Kim Yu-Na take home the gold, or would an entire nation turn its back on her forever?

These are the questions looming on Thursday as the women's giant slalom begins: The big unknown here is whether or not Mancuso can partially make up for her 18th place finish on Wednesday after being forced to repeat her first run due to a fall by Lindsey Vonn.

Of course, Mancuso has been drawing criticism thanks to her comments over the weekend about the "popularity contest" between Vonn and other skiers. She seemed to lament, in an interview for Sports Illustrated, that Lindsey Vonn had a big influence over the team. "People are having a hard time reaching their potential because it's such a struggle for attention. You come to meetings after races, and it's like it's a bad day if Lindsey didn't do well."

Suddenly it's crystal clear why Mancuso might be losing that popularity contest. Right before Mancuso's second run, the NBC announcer says of Mancuso and Vonn: "These are two characters with polar opposite personalities. They approach their personal lives and their ski careers differently, they've got different goals, and you know what? That's just the realities of life on the national team." Everyone has said this so many times, and yet: What are the differences, exactly? This is just like those vague allusions to the "personal struggles" of Speedy Peterson. Does Mancuso drink and Vonn crochets? Mancuso sluts around in her rhinestone tiaras and Vonn is married? Give us something concrete, here!

Unfortunately, in the actual ski contest, Mancuso can't make up for her bad finish the day before, and she finishes 8th after her second run. Germany's Viktoria Rebensberg takes the gold, Slovenia's Tina Maze takes silver, and Austria's Elisabeth Goergl gets the bronze.

At the bottom of the hill, NBC's announcer asks Mancuso about her comments. "I really think it's been taken a little out of proportion," Mancuso said (or, you know, taken out of context and then blown out of proportion). "Of course she deserves the attention, she really is the greatest American female skier we've had." Nice double-remorse full reversal, Julia. Is that an event you've trained for, or are you just improvising?

At any rate, Mancuso has two silvers and Vonn has a gold and a bronze, so neither can be that unhappy.

Time for freestyle skiing, men's aerials, see also, crazy twisty flipping by insane people. As you'll recall from Monday night's coverage, the big story here in terms of Americans is Jeret "Speedy" Peterson. Everyone is hoping he'll do his huge Hurricane jump, as promised, a jump that he hasn't landed in competition since 2007.

In fact, Peterson was in bronze medal position in Torino in 2006 and he decided to go for the Hurricane. He didn't stick the landing and he lost his medal. This time he needs a really big jump to get a medal. He goes for the Hurricane ... and nails it! He takes the lead! "He absolutely tagged it, one of the best ones I've ever seen him do!" says Johnny Moseley. The crowd goes wild!

Then Belarus' Aleksei Grishin does a full-full-double-full, let's call it the Mangler. He nails the landing and takes first! The final competitor is Canadian Kyle Nissin. He pulls his knees in and the landing isn't totally controlled. He gets a very low score.

That means Speedy gets the silver! Hurray for Speedy!

Next is the men's nordic combined. The large hill jump already took place, now the competitors take part in a 10k cross-country race. Austrian Bernhard Gruber starts 34 seconds ahead, but Americans Bill Demong and Johnny Spillane catch up with him and leave the pack behind. It's a nail-biter of a three-way race until the very end, when Demong pulls ahead, Spillane takes a close second, and Gruber struggles and falls behind. Gold and silver for the Americans! Right after crossing the finish line, Demong shrugs and jokes, "That was pretty good." Undercutting your gold, for a quick laugh! A nation of undercutters heartily approves.

Finally it's time for the women's figure skating. Everyone's talking about South Korean Kim Yu-Na after her fine performance in Tuesday night's short program. But before we can see her shine, it's time for American Rachel Flatt to take to the ice.

Flatt's mother is a molecular biologist and her dad's a geochemical engineer, and Flatt just got accepted to Stanford. Unfortunately, her skating kind of reminds me of Evgeni Plushenko's: solid jumps, with no flair or grace, and her spins are downright ungainly. She does the job, but she doesn't make it look very fun. Nonetheless, Scott Hamilton declares this "her best performance of the year."

Before we go any further, a word about skin-colored skates: Blech. Yes, maybe they make your legs look longer, but they're ugly, made uglier by those suntan-colored nude hose that run straight into them. They make skaters' legs and feet look like two orange, misshapen fingers.

Japan's Miki Ando comes out in a Cleopatra outfit skating to what sounds like the theme song to HBO's  "Rome." She nails all her jumps but her program isn't all that moving, somehow. There's no emotional center to it. "It just felt really conservative to me, but ... without a lot of impact," says Hamilton.

Just as we're starting to feel extra sleepy, here comes the night's favorite, Kim Yu-Na. She is "the most popular celebrity in South Korea," according to Tom Hammond, but he says that she wrote a book of short essays about the pressure she carries. In one essay, she wrote, "If my performance falters, not only people around me, but the whole nation might turn their back on me." At least you don’t have to struggle for that attention, Yu-Na! You don’t know how hard it is to sport a little rhinestone tiara everywhere you go.

Actually Yu-Na looks extremely relaxed for someone whose nation might ditch her at any second. She skates very fast and her jumps are higher than anyone else's. She also has more musicality and grace than anyone else. By the end of her performance, I’m sniffling. "This is one of the greatest Olympic performances I've ever seen!" gushes Sandra Bezic.

"The coronation is complete, long live the queen!" says Hammond. Yu-Na gets a record-high score of 228.56, which destroys the old record, 210, also set by her.

"And the only woman who has a chance -- had a chance -- is on the ice now," says Hamilton.

You really do have to feel for Japan's Mao Asada, being forced to step out onto the ice while the crowd roars over Yu-Na. Mao is sporting a red and black outfit and she soon becomes the first woman in skating history to do three triple axels in a competition. But she also makes a few mistakes and her performance doesn't come close to Yu-Na's.

In truth, the night just isn't very suspenseful, compared to the way women's figure skating shook down at the last few Olympics.

But then, suspense is replaced by overwhelming emotion when Canada's Joannie Rochette appears. She skated the short program two days after her mother's unexpected death of a heart attack. She stumbles a little on a jump, but she's a beautiful skater. After her program ends, she's teary and none of the announcers can speak. Hamilton is very quiet, then his voice breaks, and it's pretty clear that he's weeping openly. I'm crying along with him, surrounded by tissues. Please let this poor girl take home a medal!

Finally we have American Mirai Nagasu, looking very young and very nervous. She nails every single jump, and her skating is pretty lovely. "She is a delight, and she just made herself her own Olympic moment," says Bezic.

Nagasu's scores lift her to fourth. That means Yu-Na wins the gold, Asada gets silver, and Rochette wins bronze! After seeing American women medal here so many times, it's almost strange not to have an American on the podium. But these are the rightful winners tonight, and now we can sleep easy knowing that a whole nation will celebrate their queen instead of rejecting her forever!