Expert: "We dodged a bullet" 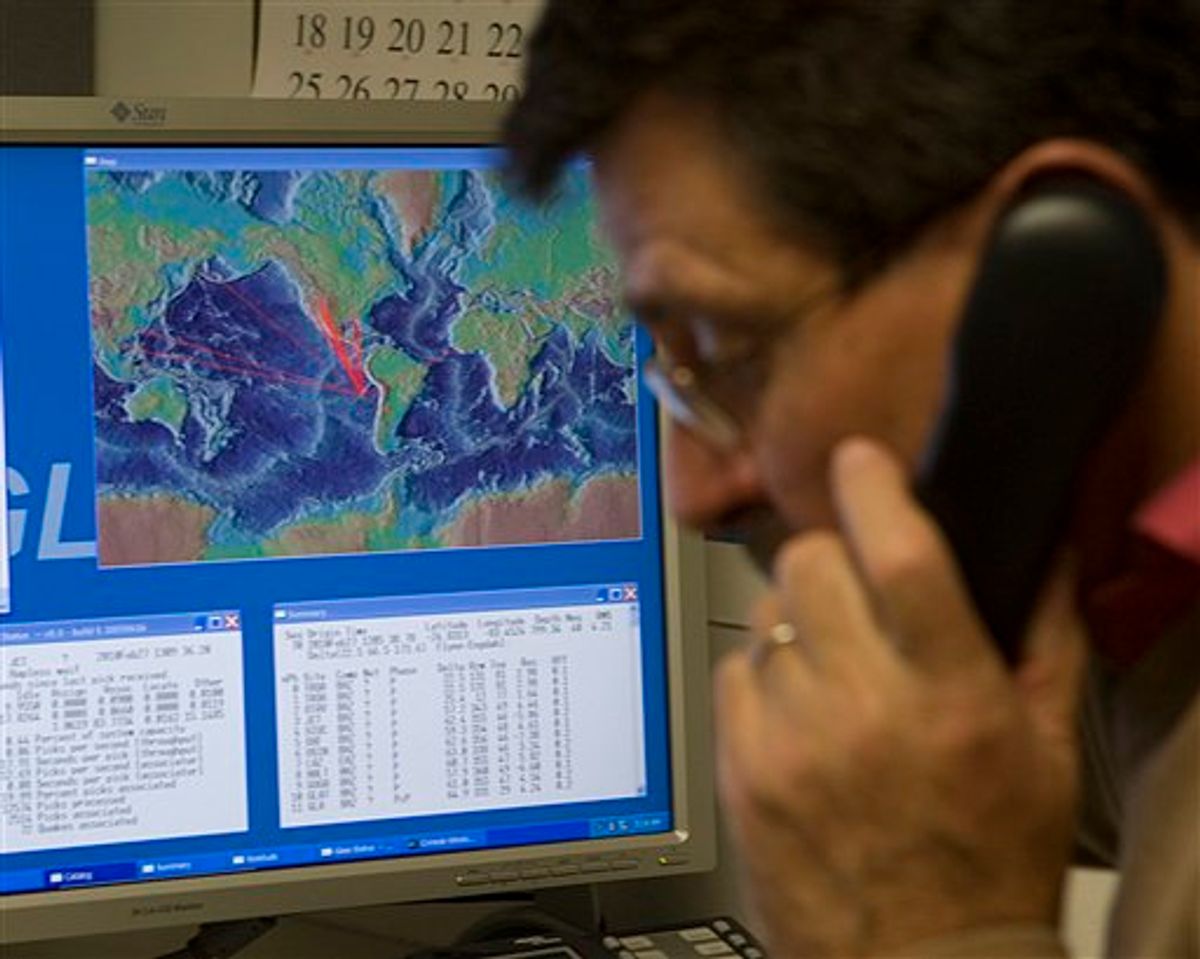 With a computer graphic showing the possible path of tsunami waves from an earthquake in Chile, Dr. Charles McCreery speaks on the phone at the Pacific Tsunami Warning Center, Saturday, Feb. 27, 2010 in Ewa Beach, Hawaii. The State of Hawaii is under a tsunami warning after an 8.8 magnitude earthquake rattled Chile today. (AP Photo/Marco Garcia) (AP)
--

Update: The Pacific Tsunami Warning Center has canceled its tsunami warning for Hawaii, with the state apparently escaping the roiling waves unscathed.

Gov. Linda Lingle says no damage has been reported in any county. Tidal surges were observed Saturday along the coasts but did not roar ashore. She's calling it "a great day now that it's over."

A tsunami triggered by the Chilean earthquake sent a surge of water ashore in Hawaii, California and islands in the South Pacific on Saturday as the waves continued onto Alaska and parts of Asia.

There were no immediate reports of widespread damage, injuries or deaths in the U.S. or in the Pacific islands, but a tsunami that swamped a village on an island off Chile killed at least five people and left 11 missing.

The tsunami was causing a series of surges that were about 20 minutes apart, and the waves arrived later and smaller than originally predicted. The highest wave at Hilo measured 5.5 feet (1.7 meters) high, while Maui saw some as high as 2 meters (6.5 feet).

Scientists cautioned the waves would continue into the afternoon.

"We dodged a bullet," said Gerard Fryer, a geophysist for the Pacific Tsunami Warning Center. He said there was the possibility that the tsunami would gain strength again as it heads to Japan.

There were no immediate reports of widespread damage around the Pacific Rim just tidal surges that reached up to about seven feet in some island chains. Waves hit California, but barely registered amid stormy weather. No injuries or major property damage were reported.

The tsunami raced across the Pacific Ocean at the speed of a jetliner after the quake hit Chile hours earlier. Unlike other tsunamis in recent years in which residents had little warning, emergency officials had ample time to get people out of the potential disaster area.

Sirens blared in Hawaii to alert residents to the potential waves. Emergency officials used buses to ferry people in tourist-heavy Waikiki away from the shore. Authorities even flew overhead in Cessna blaring warnings to people to get out of the potential danger zone

In Tonga, where nine people died in a Sept. 29 tsunami, police evacuated tens of thousands of people from the coast.

In Samoa, where 183 people died in the same tsunami, authorities used radio, television and mobile phone text messages to alert residents of the waves. Thousands of people Sunday morning remained in the hills above the coasts on the main island of Upolu.

Island chains closer to the epicenter in Chile appeared to have sustained more damage than ones farther away.

On the island of Robinson Crusoe, a huge tsunami wave flooded the village of San Juan Batista, killing at least five people and leaving 11 missing, said Guillermo de la Masa, head of the government emergency bureau for the Valparaiso region.

He said the huge waves also damaged several government buildings on the island.

In French Polynesia, tsunami waves rushed ashore, damaging parts of the coast and tossing around boats. The biggest waves were in Hiva Oa, Marquesas Islands, where they reached more than 13 feet (4 meters).

Australia warned of the possibility of dangerous waves, strong ocean currents and flooding from Queensland state in the north to Tasmania in the south. No evacuations were ordered.

In Hawaii, boats and people near the coast were evacuated. The normally bustling beaches were empty. Hilo International Airport, located along the coast, was closed. Residents lined up at supermarkets to stock up on food and batteries. Cars lined up at several gas stations.

The Navy was moving more than a half dozen vessels to try to avoid damage from the tsunami. A frigate, three destroyers and two smaller vessels were being sent out of Pearl Harbor and a cruiser out of Naval Base San Diego, the Navy said.

The ships will be safer out at sea than if they were tied to piers where they could be banged around by the waves, the Navy said.

A tsunami wave can travel at up to 600 mph, said Jenifer Rhoades, tsunami program manager at the National Weather Service.

The Sept. 29 tsunami, spawned by a magnitude-8.3 earthquake, killed 34 people in American Samoa along with the deaths in Samoa and Tonga. Scientists later said that wave was 46 feet (14 meters) high.

During the devastating December 2004 Indian Ocean tsunami, there was little to no warning and much confusion about the impending waves. The tsunami eradicated entire coastal communities the morning after Christmas, killing 230,000 people.

A grocery store was filled with people buying everything from instant noodles to beer. Shelves with water were mostly empty.

Hawaii Gov. Linda Lingle declared a state of emergency. She said leprosy patients from the Kalaupapa settlement on Molokai have been moved to higher ground before the waves arrived.