The short-track star wraps up his Olympics in controversial style. Plus: The joy of sports where crashes count 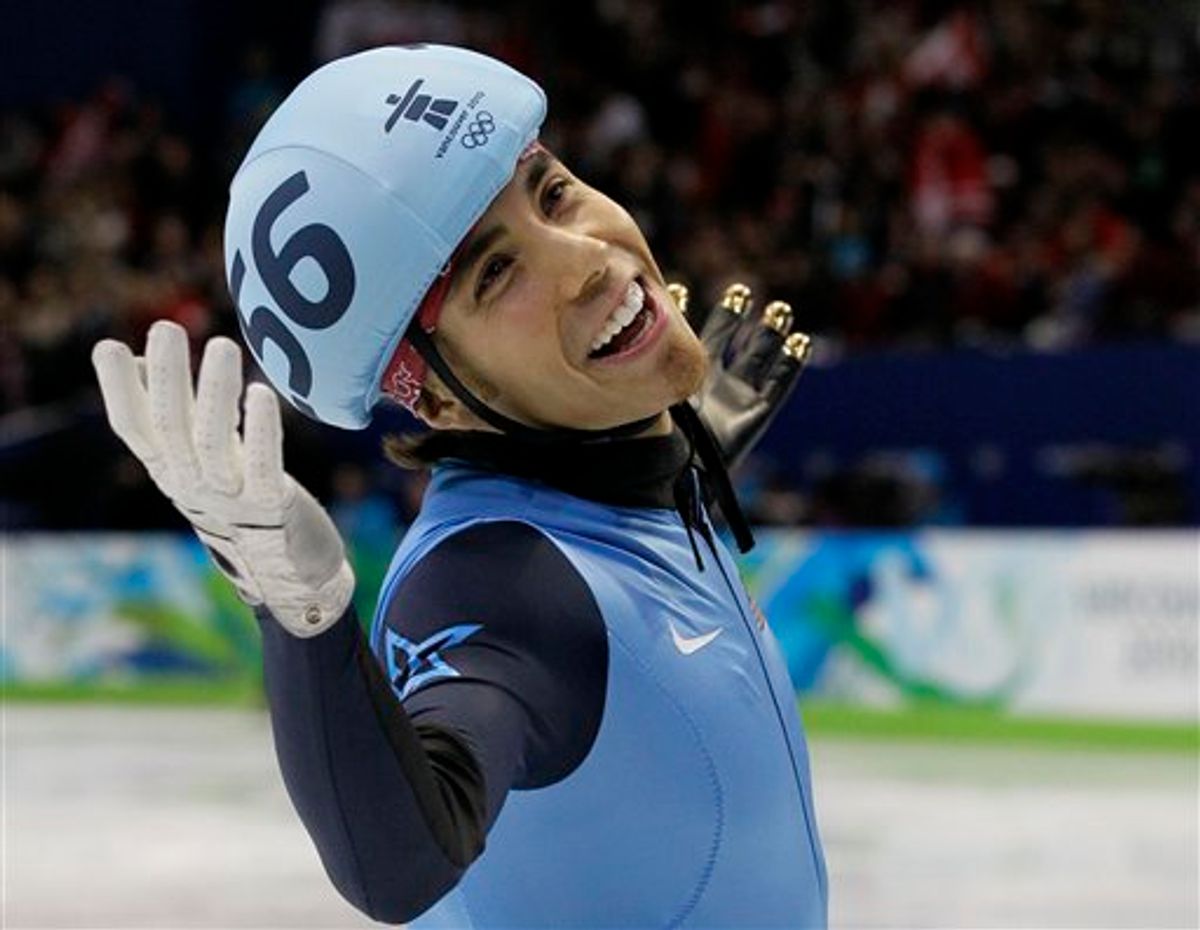 "She looks just like Shaun White," says my 10-year old daughter Emma. It's a little after 4 p.m., and the rest of the world is watching hockey, or Oprah. I am tuned to MSNBC, watching Mirjam Ott, the Swiss skip in curling, slide stones in the bronze medal game of women's curling against China. I find it vaguely comforting, like watching C-Span or Chasing Classic Cars.

I construct an elaborate backstory for Ms. Ott, she of the curly red mane. Sponsored by a cartel of Swiss Banks, she built a secret ice sheet where she could push the bounds of curling without pressure from adoring fans, jealous competitors, and the paparazzi. Working with the aid of a foam pit, she will get the rocks to curl both to and fro—a front side double Spin Doctor 1260. She tries to get the rocks to curl over each other, to play the game above the ice, but she misses the foam pit and it's ugly. Her entourage including Roger Federer's racket stringer and a St. Bernard named Guenther gather by her side as they await an ambulance….

I google Ms. Ott. She is not Shaun White's birth mother. She did have all her stuff stolen out of a van last week, including her lucky game-worn $299 Balance Plus Delux curling shoes. Who leaves stuff in a van in Vancouver? She was curling in a tight new pair of shoes and without a GPS unit. They seem to have stolen her mojo, too.

There will be no front side Double Spin Doctor and no trip to the White House for Ms. Ott. She slides the big old rock. She misses all the other rocks. She hurls the big ol' rock again. She misses again. The Chinese score like four points off this last screw up, which is a lot in curling or so I'm led to believe. Ms. Ott concedes. Concedes. The bronze medal. Concedes. Still, I feel bad for her, looking like Shaun White, choking in the clutch, while some Vancouver junkie tries in vain to sell her shoes for $10.

I am such a geek.

Access Hollywood is over, along with its montage of Maria Menonous playing hockey and Billy Bush flirting with Katarina Witt. It's NBC Olympics prime time. On tap: bobsled, Lindsey Vonn, and Apolo Ohno.

And thankfully, no figure skating, if you ignore a very special interview with Joannie Rochette.

"Is he the coach?" Emma asks when USA 1 bobsled pilot Steve Holcomb is interviewed. He is very cool, in a King of Queens kind of way. He couldn't beat the women curlers in a footrace. His speed suit is stuffed tighter than a natural casing vendor pack Sabrett hot dog.  And he speaks in clichés. "Play ‘em one run at a time…just trying to help out the team…god willing." Who needs Nuke LaLoosh?

I have a new favorite Olympian. Until the second run, when he does the Holcy Dance. The less said about that the better.

"Are they going to win or crash?" Emma wonders. The St. John Family has NBC figured out. Every live-on-tape segment of this Olympiad, whether it's bobsled or ski racing or speed skating, is edited the same way. The contenders come down, one sets a fast time, someone else, preferably an American beats it. Then there's the 39-year old Swede in the start house. Could he win a gold medal?

Or could he get medivac'd out after a crash that would make Vinko Bogataj wince?

This is the question we ask as the Russian sled gets ready to rumble.

Bobsled doesn't work on television. The sleds blur by in an Eistensteinian montage, left to right, right to left, head on without rhyme or reason. It's like playing a video game where you keep hitting the wrong button and changing the POV by accident. Color guy John Morgan makes up for it by yelling at the top of his lungs, but it makes my headache worse.

The Russian sled is pretty fast, but not gold medal fast, so I've got a bad feeling as he enters the dreaded 50/50 curve—wasn't it only 10 days ago that a man was killed here? Sure enough the sled reaches its tipping point, flips over, and a ton of shiny metal and angry Russians hurtle down the ice at speeds that would cost you four points on your license in any state but Nevada. "He walked away with a football player mentality," says Morgan. Big crash, no injuries, America's leading and all is right with the world.

I am about to tell you why bobsled is better than figure skating. Crashes count.

In bobsled, the Russian pilot flips upside down, and that marks the end of his Olympic experience, unless you count the instant replays. In skiing, Lindsey Vonn falls, and she's done. In short track speed skating, the two Korean guys fall and you can stick a fork in them. Not so in figure skating. You can fall on a triple salchow, get up, fall on a triple toe loop, get up againt and then complete the trifecta by falling on a triple flip. You can clean the ice like a sequined Zamboni, and you're allowed to continue, while Sandra Bezic talks about the elegance of your footwork and the intricate beauty of your musical interpretation. And not just continue, but actually contend for a medal. Skating's enlightened scoring system seems to treat the Human Zamboni routine just about the same as a triple jump that's under-rotated by an eighth of a revolution. Sure the women's long program beat American Idol in the ratings. That's because no one can tell the difference.

A sportswriter friend of mine is in Vancouver. He is not particularly happy about this. He would, no joke, rather be back home covering the NJ Nets in their deathless struggle to get to six wins. Yesterday morning sent me an e-mail. He was watching Elena Glebova of Estonia do her long program and needed to share.

Another journalist friend quipped back.

"In my vast past experience covering Olympic women's figure skating finals (too many), I always found that the most fun is to be had shouting "Down goes Frazier!" every time another ass hits the ice."

When I read that, I spit orange juice through my nose.

As for the women's slalom, let's cut to the chase. Lindsey Vonn misses a gate. Ouch. But she stays around to root for her German friend, Maria Reisch. Awww. That said, I'm pretty impressed by the telestrator work of Christin Cooper. She shows how one of the skiers clears a gate imprecisely and the pole falls right onto her ski and wobbles the tip. Sweet. Yes, I'm a geek.

A rare moment of honesty from NBC. Something important happened in the plain old regular speedskating. The Americans are skating against the Dutch for a place in the team pursuit finals. With no prospect for crashes or tears, the producers see all of America flipping to FOX en masse. So Dan Hicks and Dan Jansen fess up. And I paraphrase. "Okay, people, there's something to watch here. Really. We win. The United States. We beat the Dutch guy, who got knee capped by his coach. The American's going to stick his tongue out. Don't change the channel. Please. And don't forget Joannie Rochette is coming up soon and you don't want to miss her."

And then there's Apolo Anton Ohno. Words fail me. What exactly do we call that thing that sits below his lip. It's not a soul patch. It's not a goatee. And even more frightening, I resort to Google. No one has yet named this thing. Really. In honor of Mr. Ohno's Olympic run, I, too, have grown a soul patch on steroids, but I don't know what to call it either. So, please, in the name of all that is decent and right, let's name Apolo's facial hair. That's what the comments page is for.

As for Apolo's last race, he's behind. He pushes the guy. He hopes to get away with it. He doesn't. "It was more like a cushion," he tells Chris Collinsworth. Having laid this groundwork and smiled his boyish smile, he goes after the Canadian judge who DQ'd him. "That's the head Canadian ref, and we're on Canadian soil…"

I realize this may be the last time we see Mr. Ohno and his enigmatic facial hair in an individual Olympic race. I wonder what lies ahead for this great champion. Shifting blame. Lying with conviction. Raising the specter of conspiracy. He'll be a very good CEO someday. Unless he decides to go into rock and roll. I can see it now: The Plastic Ohno Band. Maybe his dad, Yuki Ohno…oh forget about it. I am such a geek.