Embarrassed by the Kentucky obstructionist's antics, Republicans desperately try to change the subject 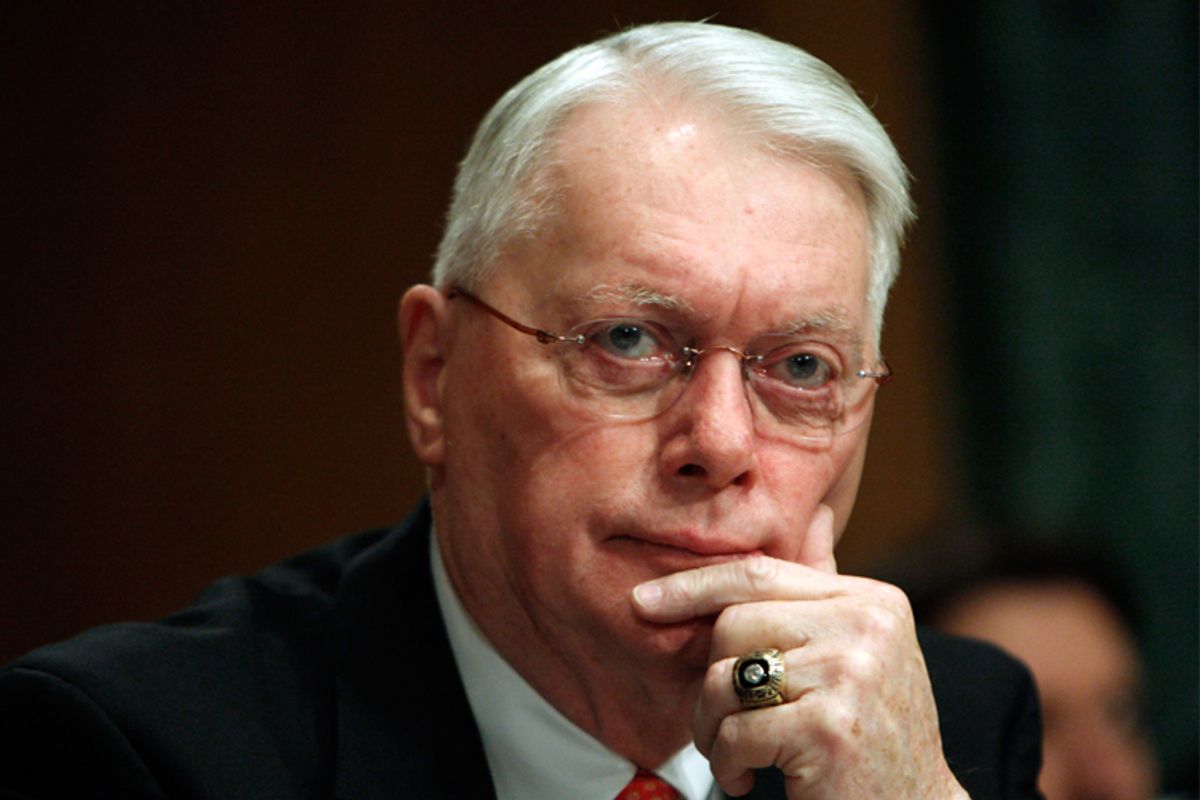 No one in the Senate wants to be held responsible for Jim Bunning.

Democrats have spent the day blasting the Kentucky Republican, whose personal filibuster against extending unemployment benefits past Monday's expiration date means about 400,000 Americans are in jeopardy of not getting checks they're entitled to. But the GOP is trying pretty hard to make sure they don't get stuck with the blame for Bunning's antics, either.

Bunning's relationship with Senate Republican leader Mitch McConnell, also from Kentucky, is extremely hostile. A senior Senate GOP source tells Salon Bunning gave Republicans no advance warning before he launched his stunt last week. McConnell and Senate Majority Leader Harry Reid, D-Nev., had already agreed on how to move forward with temporary legislation extending unemployment benefits (and other federal spending), but Bunning -- taking advantage of the Senate's sometimes preposterous rules -- objected, blocking the whole thing. The GOP, though, says Reid should have been able to avert the problem in the first place. Instead of passing a tourism bill last week, Republicans say Reid should have filed for cloture on the unemployment extension; that way, Bunning's delay wouldn't have pushed the bill past Monday, and no deadlines would have been missed.

"All these problems could have been avoided with better management on the leadership side," the GOP aide said. "They all blame it on Bunning, but they could have got around Bunning. They could have made Bunning moot, but they didn't do it."

But Democrats aren't sitting back and letting the GOP slough off its problem child. Republican leaders, Reid's office points out, haven't condemned Bunning with any force -- they've only said they didn't plan his escapade. Since no one was expecting a hassle over the unemployment bill, Reid and his aides didn't think they needed to bother filing for cloture on it last week. Spokesman Jim Manley told Salon the GOP line was "artful spin that bears very little resemblance to the truth."

"The fact is the Republican leadership has yet to declare whether they support Bunning or not," Manley said. "So far their silence speaks volumes."

Meanwhile, Democratic rhetoric is starting to lump other Republicans in with Bunning. Democrats are calling him a hypocrite, for voting against a provision in January that would have forced Congress to pay for new spending as it enacts it -- the very thing Bunning now says he wants lawmakers to do with the unemployment extension. That's also the line they're trying to use on dozens of GOP lawmakers who voted against -- and blasted -- last year's economic stimulus bill, before showing up at local events touting its programs. The Democratic National Committee is playing up Bunning's stubbornness, without ever noting that he's probably even more reviled in the GOP caucus than he is among Democrats (hey, at least Democrats get a nice political issue from this little stunt).

As for the people whose unemployment benefits are due, aides in both parties say they hope that once an extension is finally approved this week (after Republicans join Democrats in voting for cloture, and shutting Bunning down), it will be made effective Monday. That would mean some complicated paperwork for federal and state bureaucrats, but it would also mean everyone gets the checks they're due.