With dimples like weapons, the star of "An Education" plays a stronger, wiser kind of ingenue 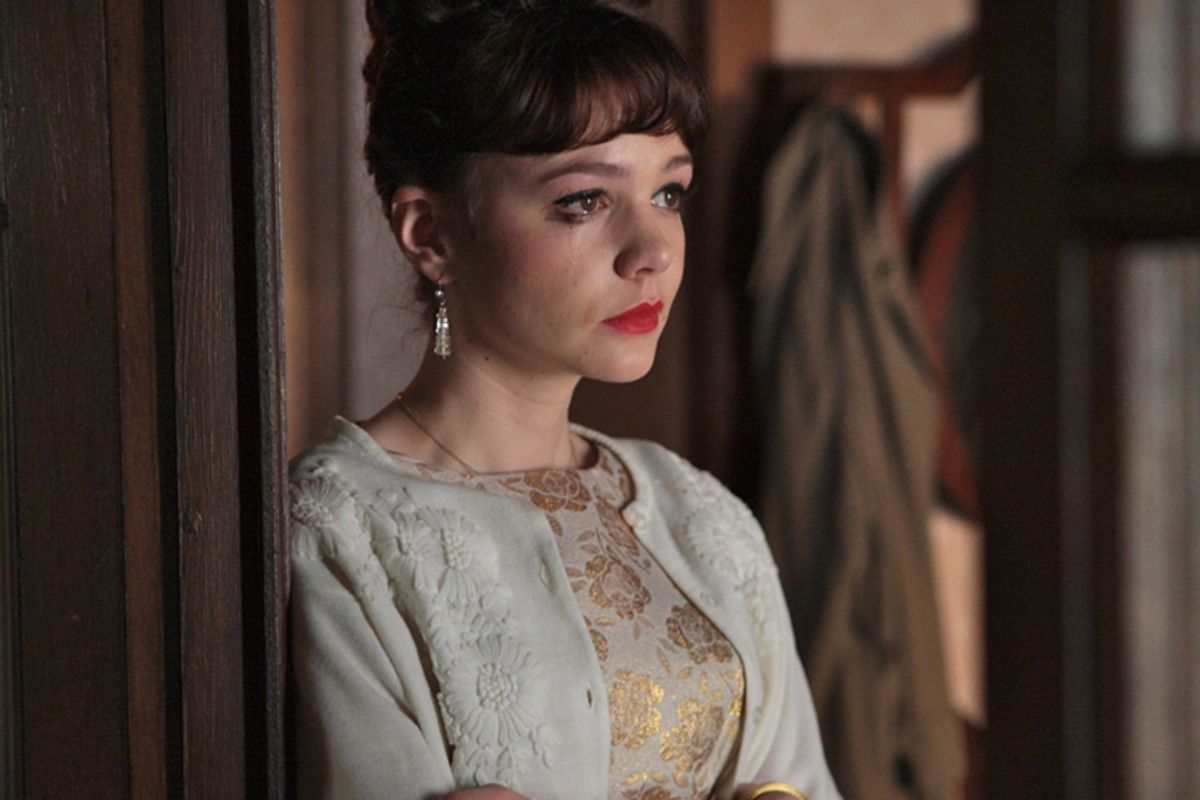 Carey Mulligan in "An Education"
--

At one point in Lone Scherfig's "An Education" Carey Mulligan, as a 16-year-old schoolgirl whose yearning for culture and sophistication is being stroked by an older man, sits in a posh supper club flanked by this new beau and his two ultra-sophisticated friends. Mulligan's character, Jenny, is a bright girl bucking the constraints of her suburban upbringing; this is early '60s, pre-swinging London, an era when nice girls supposedly didn't (though in actuality they often did). But it's not really sex Jenny is after; what she's seeking is much harder to define. She speaks schoolgirl French, sneaks cigarettes with her friends, and spends hours stretched out dreamily in her room, listening to Juliette Greco records -- records that, in those pre-Amazon days, actually had to be brought back from France in a suitcase by a human being, or at least special-ordered from your local record shop. Jenny is hungry for the world, and that supper-club scene in "An Education" nails it: Sitting at the table with her new friends, her hair done up -- or, rather, undone -- in the nondescript center-part hairdo of schoolgirls everywhere, she's the teenage equivalent of a plane ready for takeoff. Her simple plaid shift dress is accessorized with a dainty heart locket, a cigarette poised delicately between her fingers and -- the killer detail -- dimples.

Mulligan's performance is touching because it isn't about overcoming teen awkwardness. Jenny is far from ungainly, either in her bearing or her way of expressing herself. As it turns out, she's more poised -- more straightforward, more principled, essentially more all-around grown-up -- than the man with whom she's become involved, David (Peter Sarsgaard). David is a rather shady deal maker who gets by on his smooth manners. (He also happens to be Jewish, and one of the movie's flaws is that instead of seizing the opportunity to puncture anti-Semitic attitudes in early '60s Britain, Scherfig instead plays into them.) David's equally suave friends, Danny and Helen (Dominic Cooper and Rosamund Pike), are climbers too, and for a time the three of them treat Jenny as something of a mascot. Under Helen's tutelage, Jenny learns how to wear the right dresses and twist her hair up into a perfect lacquered chignon. At one point she remarks to Danny that, when it comes to art, she's still not sure "what makes good things good," and he reassures her -- meaning it -- that she does know, even when she doesn't know why. Her instincts, in art if not yet in life, are sound.

Actors can't (or shouldn't) play instincts; they can only play people. And that's the marvel of Mulligan's performance here: She navigates the tricky territory of playing a young woman who's sure of herself but doesn't yet know it. This isn't a dark performance, or a moody one. What's wondrous is the sunny intelligence of it. At times Mulligan's face appears soft, childlike: Her dimples are like stealth weapons -- they appear out of nowhere, unbidden and striking. Mulligan was in her early 20s when the film was being made (she's now 24), and in real life she's certainly a grownup. But from certain angles Jenny's face still shows traces of baby fat, remnants of childhood that aren't yet ready to disappear forever. Maybe that's what makes Jenny's resoluteness so affecting. When she rails against the headmistress played by Emma Thompson, who has urged her to stay in school and work toward doing something useful, like teaching, the hellfire in her eyes is anything but childlike. Why, she demands, should she want to go through life doing something that's "hard and boring"? (In the heat of the moment she's mischaracterizing the profession, but she's responding to the way Thompson treats a teaching career as a glum death sentence, not a challenge.) "This whole country is bored!" she continues. "There's no life in it or color or fun." In that moment, as Mulligan plays her, Jenny isn't just a woman who's stopped waiting for things to happen, but an historian of the future: Before long, strange and wonderful things will happen to her country -- things like Jimi Hendrix, Ossie Clark, the Rolling Stones, not to mention the Beatles -- and they'll happen as a direct response to the boredom she's talking about.

While Mulligan's performance is completely intelligent and sensitive, it isn't necessarily what you'd call delicately multilayered: It's as direct as a bullet, which is what makes it so effective. That's especially true in Mulligan's sex scenes with Sarsgaard. Jenny has told David that she wants to remain a virgin until age 17, a choice he supports. He doesn't move in on her or pressure her, but when, after her birthday, the moment has finally arrived, she sets down a few ground rules: "No baby talk. No 'Minnie,'" she says pointedly, referring to the childish pet name he's given her. "Treat me like a grownup."

The experience of losing her virginity is something of a letdown, but Jenny isn't surprised, saddened or disappointed: There's something inside that tells her there's something -- someone -- better out there, and before long, she's on her way toward finding that. Mulligan is just at the beginning of her career, and with luck, there will be plenty of roles for her to grow into. But the performance she gives in "An Education" is the kind that an actor can give only once in his or her life. It's about knowing what you want before you can even articulate what that something is, reaching out toward a murky future that feels like darkness but is really light.