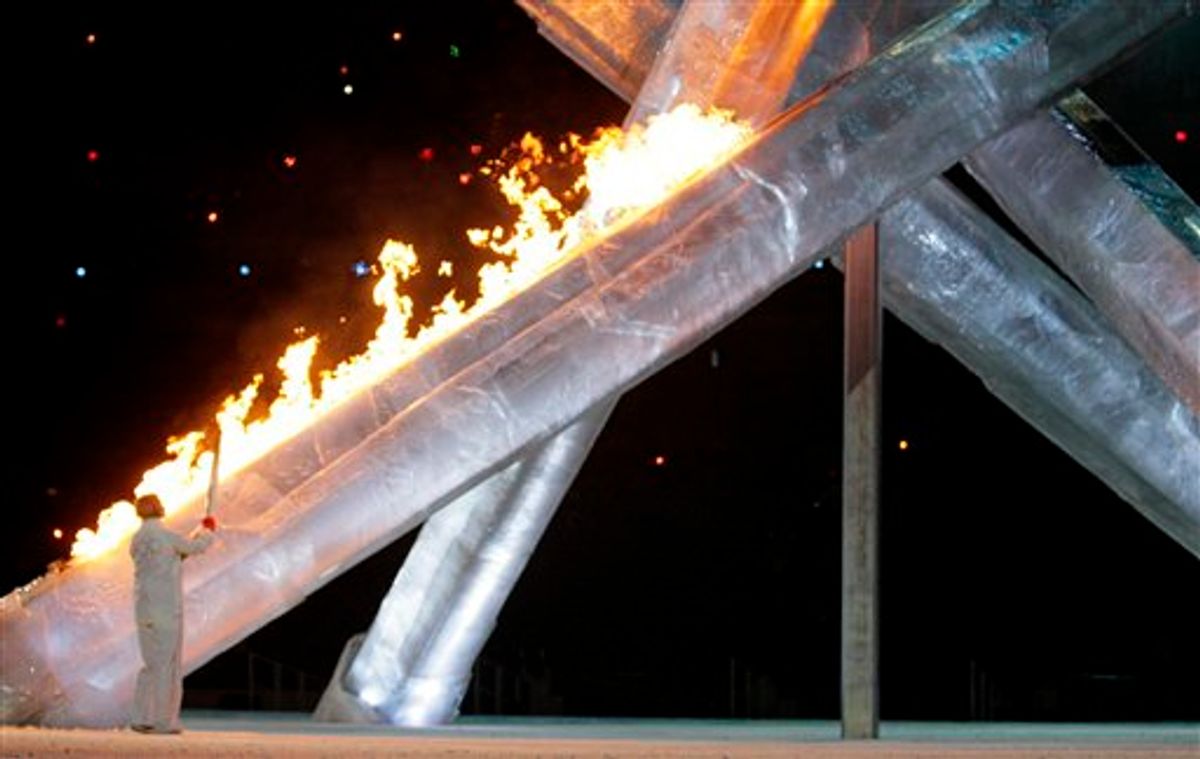 If Leni Riefenstahl had been Canadian â€“ polite, tasteful restrained -- she'd have directed something like the closing ceremonies of the 21st Winter Olympics. Staged in BC Place Stadium in front of 60,000 people, most of them fresh-faced Canadians who looked as if they were chosen to advertise their country's health care system, the ceremonies were opulent and extravagant, yes, but with a charmingly self-effacing quality correctly described by NBC's Bob Costas as "Walt Disney meets Busby Berkeley." And it was in French and English.

Canadians, Costas mused, have always displayed an ability to laugh at themselves -- a quality sorely lacking in some of their neighbors. At least the humor seemed intentional; why else you would ask William Shatner to speak to a worldwide audience on "What It Means to be Canadian."

"You have to dream big," he said solemnly, "in a land that is the final frontier."

Canadians are not big on sarcasm -- as a Canadian actor on "30 Rock" recently explained it, "We have a small Jewish population" -- but there's a limit to even Canadian politeness. It's the first time I've ever heard 60,000 people guffaw.

That changed the mood, observed Costas's co-anchor Al Michaels. So did Catherine O'Hara, who cheerfully warned visitors that, "When you pee your name in the snow, we know who you are."

Then came a parade of what Costas called "the always enjoyable giant inflated beavers." The beavers were followed by a colossal inflatable moose. Back in New York, the Macy's Thanksgiving Parade Committee must have been green.

Jacques Rogge, president of the International Olympic Committee, told everyone, "To the athletes of these games, we say you have made us proud. These were excellent and very friendly games." He was right, and you could see it in the faces of the athletes. Ryan Miller, the star goalie of the U.S. hockey team, had, a little more than two hours earlier, looked distraught when Team USA lost to Canada in overtime. Now, as the athletes paraded around the stadium, he was beaming as he snapped photos on his cell phone.

"This is what the Olympics are about," said Michaels, and the comment wasn't mere sentiment. The whole atmosphere was so friendly and goofy that when the athletes formed a giant June Taylor dancer-like formation it didn't seem to matter that no one could quite understand what letters they were trying to make. Neither, apparently, could Costas, who paused and said, "As we bid fond farewell to Vancouver ..."

Accompanied by his own acoustic guitar, Neil Young made the evening complete by singing "Long May You Run" as the Olympic flame was extinguished. It would have been a great place to end things, but unfortunately, Michael Buble then did an ersatz Broadway-like musical number I couldn't identify backed by oversized Mounties, hockey players and what looked like models wearing giant maple leafs. It was everything the ceremony had not been up to that point -- Canada imagined by Baz Luhrmann.

Oh, Canada: Just one minute of Leonard Cohen would have made it all right.