"Flawless: Inside the Largest Diamond Heist in History" 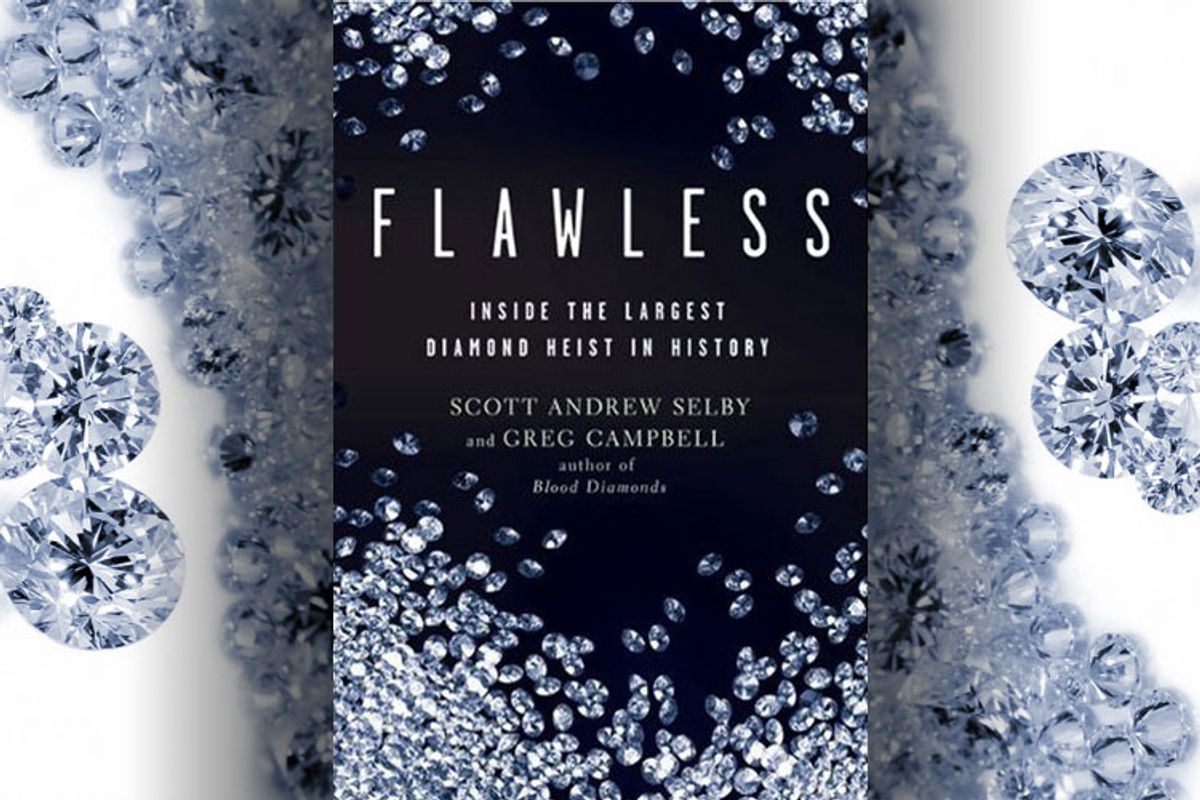 Winter, too, has its dog days, when "crisp" feels more like just plain cold, the streets are lined with grimy crusts of snow, and all the interesting holidays are shrinking in the rearview mirror. It's a time of year that calls out for the occasional binge of frivolous reading every bit as much as summer does. "Flawless: Inside the Largest Diamond Heist in History" by Scott Andrew Selby and Greg Campbell, a caper movie in print, complete with European locations and a dash of journalistic scuttlebutt, offers exactly the right blend of diversion and pith. It's a ripping yarn, yes, but a meticulously reported one.

The heist recounted here is the 2003 burglary of a building in Antwerp's storied Diamond District, a neighborhood known for its "in-your-face display of armed, protected and monitored fortifications" that was once deemed "tight as a nun's ass" by a John Gotti henchman. A team of expert Italian thieves, known as the School of Turin, made off with a haul of jewelry, cash, securities, precious metals, gems and, of course, a huge quantity of cut and rough diamonds, the exact value of which could not be determined. At minimum, the job nabbed $100 million in loot, more than any other robbery in history. Four men, out of what Belgian police believe was a minimum of eight conspirators, were ultimately arrested and jailed for the crime.

The building the team plundered was an office complex called the Diamond Center, which provided its tenants with storage in the supposedly impenetrable vault on its bottom floor. The building itself was located in the ultra-secure inner sanctum of the Diamond District, and was monitored by guards who permitted access only to badge-bearing tenants and their guests. Video cameras surveilled all entrances and hallways, as well as the foyer leading to the vault. The vault door itself was made of foot-thick iron and steel, double-locked using a long-necked key and a combination pad, as well as alarmed by two magnetic plates that would instantly alert an off-site security firm if they were separated during off-hours. The interior of the vault had a motion detector, a light detector and an infrared heat detector designed to go off at the temperature of the human body. A seismic alarm was set to trigger if it picked up the steady vibrations of a drill or saw. And on top of all that, the treasures inside the vault were divided among 189 safe deposit boxes, each one individually and sturdily locked.

The first half of "Flawless" sets up the challenge and the players, a coterie of career criminals most of whom had known each other for years. The man convicted of masterminding the crime, Leonardo Notarbartolo (there's considerable debate over whether he was in fact the leader), began preparing for it a full two years in advance, renting an office in the Diamond Center and posing as a diamantaire, or diamond dealer. He videotaped the premises using a camera concealed in a shoulder bag and observed the staff's security procedures, which turned out to be surprisingly lax despite the complex's reputation. He took whatever information he could gather back to Turin, for further study by team members who specialized in lock picking or alarms and had nicknames like the Wizard of Keys.

Naturally, the comparison to "Ocean's Eleven" is irresistible, and no one -- least of all the press -- has ever seen much reason to resist it. There's a bit of history and diamond lore in "Flawless," but the most fun comes from the parts where you're thinking "How can they ever get past those infrared sensors?" and then the authors proceed to explain the way some clever criminal learned to use a common household product to thwart thousands of dollars worth of high-tech security equipment. Then there was the challenge of getting the stuff out -- of the building, and out of Antwerp; the bag of diamonds alone weighed 44 pounds, "as much as a microwave oven." The theft itself was executed with such meticulous care and precision it's almost awe-inspiring -- until you realize that the dumbest of down-time mistakes is going to wind up blowing the whole thing wide open.

Well, that and a crabby retiree obsessed with preserving a tiny patch of Belgian forest -- but any more disclosures along those lines would constitute spoilage. Just when you think the story is winding down, with Notarbartolo playing sphinx behind bars while three other culprits take advantage of Italian bureaucracy to temporarily dodge the police, the authors serve up a tasty coda. Near the end of his six-year prison term, Notarbartolo offered Joshua Davis, a journalist from Wired magazine, his detailed account of the heist. This was published in a much-applauded article that the authors of "Flawless" thoroughly and persuasively debunk.

The Wired story was all kinds of fishy: Not only do the facts not add up, but before Davis came on the scene, Notarbartolo had been demanding money in exchange for his cooperation from various journalists. Then he suddenly refused to talk to anyone but Davis. Although Wired insists that Davis didn't pay Notarbartolo for his story, Notarbartolo's friends informed the authors of "Flawless" that Davis had "satisfied his commercial needs." It seems likely that those needs extended to the movie deal Notarbartolo and Davis have since signed with J.J. Abrams ("Lost," "Star Trek"). Nevertheless, despite the dicey aspects of the Wired piece, you can compensate for the main shortcoming of "Flawless" -- an insufficiency of illustrations -- by looking at the photos and diagrams accompanying it on Wired's Web site.

As Selby and Campbell point out, what Notarbartolo may need most right now is economic cover. He's out of jail, but closely watched. You see, the loot from the Antwerp job was never recovered; diamonds are famously hard to trace and relatively easy to liquidate. Notarbartolo and his confederates are in the peculiar position of sitting on piles of wealth they can't actually spend without attracting highly undesirable attention from authorities. Being able to point to a Hollywood movie contract comes in handy when you have to justify stuff like the brand-new BMW hatchback Notarbartolo was caught driving recently. (It can't really explain the kilogram of rough and polished diamonds stuffed between the car's seats, but he had another story for that.)

A few key mysteries about the Antwerp diamond heist remain, most notably, how did the thieves get past the combination lock on the vault door and who else was in on the job? Every true crime narrative ought to feature a few unanswered questions. That's one of the pleasures of the form, that little shiver of possibility, of secrets yet to be revealed and primed to be debated for decades; it was much more fun to speculate on who Deep Throat might have been than it is to know. One thing you can be sure of, though, when it comes to the Antwerp caper: Don't believe what you see in the movies.

Books Crime Must Read Our Picks What To Read