The GOP wants to turn a boring term -- reconciliation -- into a threat to the republic. The facts aren't with them 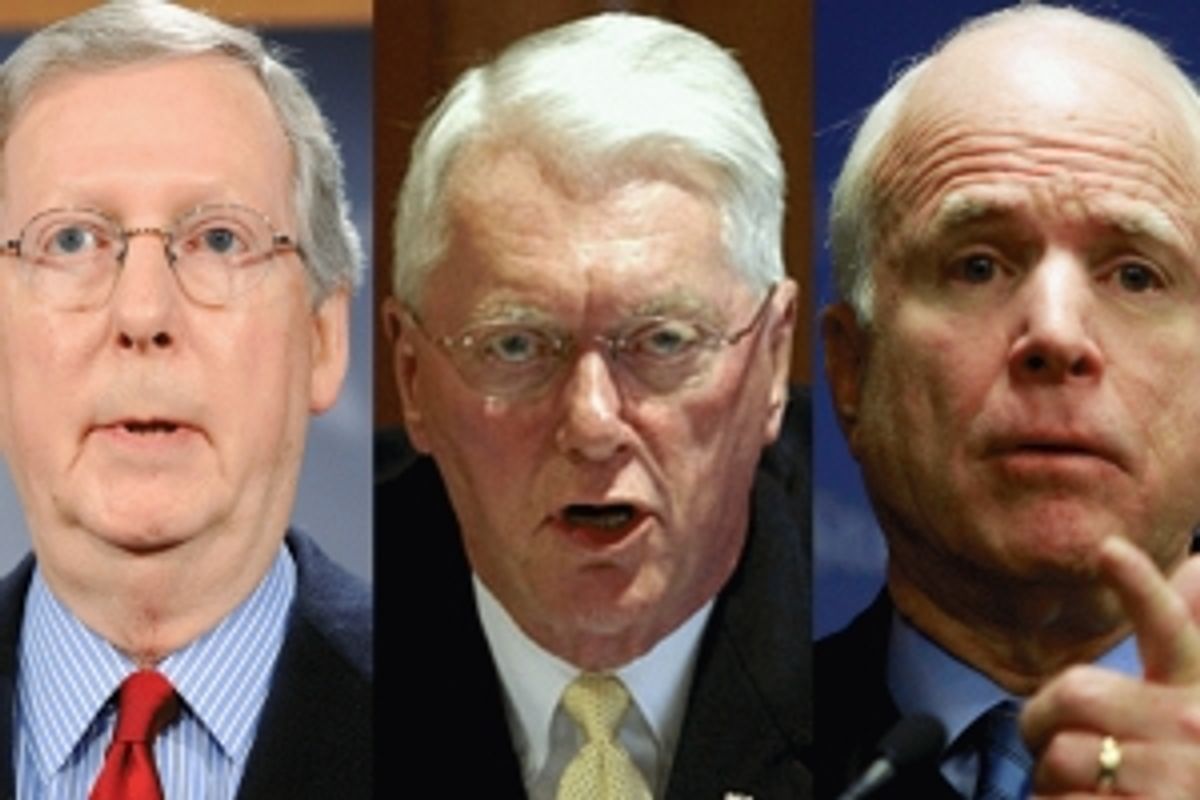 The White House is expected to announce its new plan to wrap up a year-long push on healthcare reform by the middle of the week. Which makes this a good time to get a couple of  things straight about reconciliation, the Senate procedure that Democrats expect to use to finish up -- none of which should really be news, but most of which have been buried in an early flurry of spin from the GOP. Planning ahead, Republicans set out last week to raise the political stakes if Democrats do turn to reconciliation. Democrats, on the other hand, have been making elaborate (if ultimately futile) shows of trying one more time for a bipartisan agreement to make the whole thing moot.

First of all, though you wouldn't know it from listening to Republicans, reconciliation is not some loophole that somehow gets around a constitutional requirement that legislation pass with 60 votes. There's no such requirement; until the GOP started threatening filibusters against just about everything the Senate did (setting themselves on pace for a new record in the process), bills routinely passed with 51 votes, the same number that a reconciliation measure will require. And the reconciliation process has a long history in the Senate. A 2005 report from the nonpartisan Congressional Research Service found Congress had sent up 19 reconciliation measures in the 25 years since it was first used, in 1980 -- and 16 of them had been signed into law. "Beginning with the first use of reconciliation by both the House and Senate in 1980 ... reconciliation has been used in most years," the CRS report says. Most voters are still quite familiar today with some policies first enacted using reconciliation -- the Bush administration's massive tax cuts, for example, as well as COBRA, the federal law that lets you pay to keep your health benefits if you lose your job. There are fairly strict rules about what can and can't be passed using reconciliation, which Democrats will have to follow.

The chatter from conservative media comparing the process to the 2005 fight over the "nuclear option" is also misleading. The term was used then to describe a Senate Republican scheme to have the filibuster banned -- permanently -- and only for judicial nominations. Yes, as you may have seen in clips from the time, Democrats flipped out a little bit rhetorically. (The most extreme may have been Joe Biden, now the vice-president, who said, "'I pray God when the Democrats take back control we don't make the kind of naked power grab you are doing.") But while the appeals to protect the Senate's institutional rules may sound similar, the situations are different. For one, reconciliation is one of the Senate's institutional rules, just like the filibuster. For another, Democrats aren't proposing to ban the filibuster for all future healthcare legislation; once this bill is over, the underlying rules will be exactly the same as they've always been. With the original nuclear option, if then-Senate Majority Leader Bill Frist hadn't been foiled by a bipartisan compromise at the last minute, filibustering judges in the Senate would still be impossible today, five years later.

But the biggest way Republicans are winning the early spin war is by making it sound like the entire healthcare bill would be passed with "only" a 51-vote majority, instead of the 60 votes the GOP insists are required. In fact, the Senate has already passed a healthcare reform bill, with 60 votes. And the House has already passed a bill, as well. The only thing Democrats plan to use reconciliation for is to enact changes to the bills that already went through the usual process. And most of those changes are things everyone -- Republicans and Democrats alike -- would agree make the bill better. That "Cornhusker Kickback" you've heard so much about? Using reconciliation is now the only way to strip it out of the bill, since the GOP will filibuster any attempt to pass another healthcare measure. The reconciliation measure will probably beef up subsidies to help poor people buy insurance -- but the insurance exchanges where they'll go to purchase their policies would have been set up by a bill that got 60 votes in the Senate, just two months ago.

So far, Democrats haven't pushed back very hard on the GOP spin -- which is why some outside groups have started sending more and more sharply worded press releases out about how reconciliation would work. Health Care for America Now, a labor-backed group, sent out a primer late last week. "Reconciliation isn't subjective; there's actually facts to back up the fact that it's not controversial," said Jacki Schechner, a spokeswoman for the group. "Democrats should be talking more about what it is and the extent to which it should be used."

Aides made a calculated decision not to talk much about reconciliation before President Obama finally says it's necessary. Over the weekend, Democrats did, finally, start calling it a "simple majority" instead of using the procedural name. But that may or may not be enough to help catch up to the GOP's week-long rhetorical head start. After all, voters tell pollsters they like most of what's in the actual healthcare bill; it's been the months and months of watching the process of writing it that helped sour public opinion on the measure. Now, getting the public's attention back on the substance instead of the process one final time could be the biggest test of Obama's White House "bully pulpit" yet.