Only an act of God could save his Senate campaign now (and maybe not even that). Where did it all go wrong? 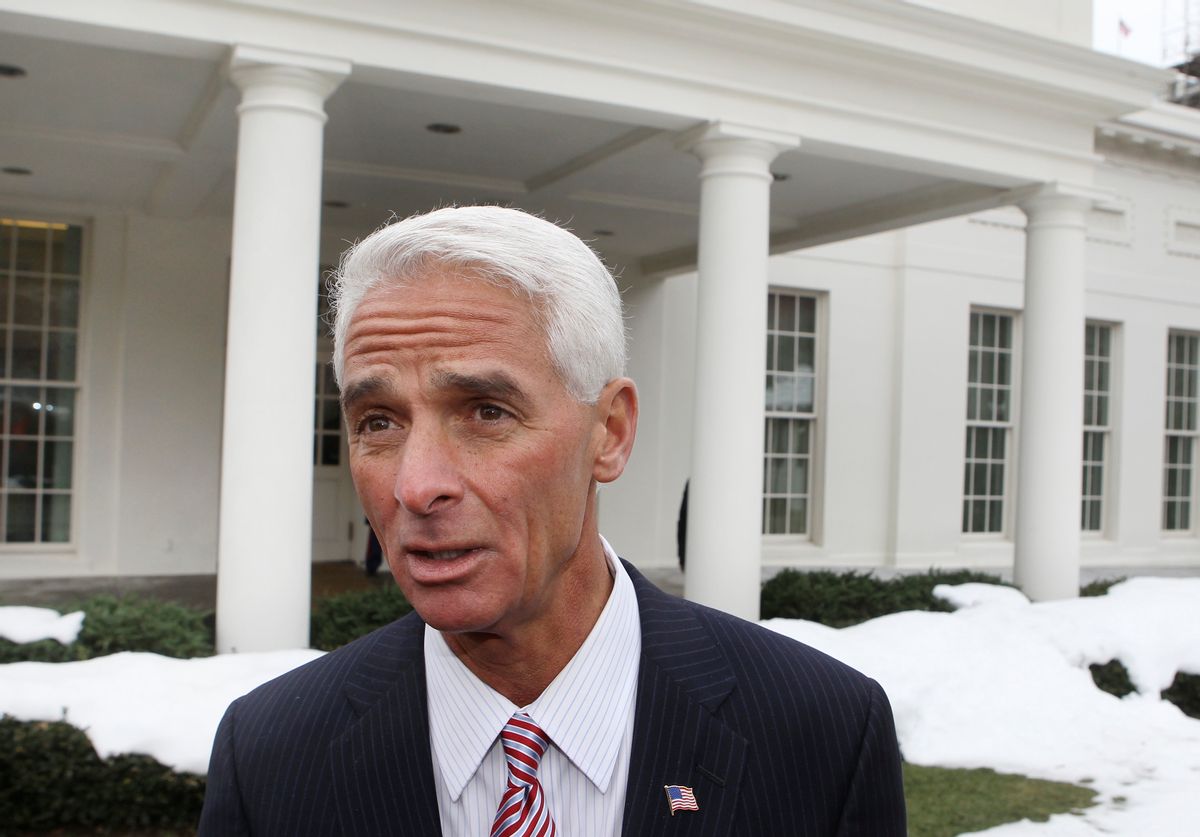 For Charlie Crist, it's all crumbled apart so quickly.

In 2008, Florida's governor was rumored to be a top contender to run with John McCain. A year ago, his poll numbers were in the stratosphere. And when he announced last May that he would give up the governor's mansion after one term to run for the U.S. Senate, he held a 35-point advantage over his opponent for the Republican nomination, Marco Rubio.

That was then. Sometime over the winter, Rubio, a former state House speaker, drew even with Crist, and now he's practically leaving him in the dust. The most recent poll has Crist lagging 18 points behind, with no apparent end in sight to the governor's spiral.

Rumors abound in Florida political circles that Crist is having serious trouble raising money; one Republican operative describes a recent conversation with a Crist fundraiser in which the latter described her job as akin to pulling teeth. And there are even reports that Crist may give up on trying to win the GOP's nod and run as an independent instead.

(His campaign's communications director, Andrea Saul, says that this speculation is "patently false," and adds that Crist "has always been a Republican and is proud to be one.")

There's no mistaking just how dire are the straits in which Crist finds himself.

"Not one survey in eight weeks has shown a single positive movement for Charlie," says Rick Wilson, a Republican strategist in Florida who doesn't work for either candidate. "Rarely have I seen a collapse that has been so broad or so sudden."

The national media has presented Crist's fall -- and the rise of Rubio, who keynoted the recent Conservative Political Action Conference in Washington -- as a tea party-inspired uprising against a pragmatic centrist. But there's more to it than that.

A series of interviews with Florida political observers and GOP insiders tells a different story -- one in which Crist's problems have less to do with his purported moderation than with an ardor for political expediency and opportunism.

"I don't know whether Charlie is left-of-center or right-of-center," says Brett Doster, an unaligned GOP strategist in the state. "Charlie is all about Charlie."

Some of the antipathy for Crist among Florida Republicans is personal. His detractors argue that his ambitiousness is unusually stark and overweening, even by politicians' standards. They note, for instance, that the governorship is the third consecutive post he's held for only one term before seeking higher office. (Crist was previously the state's attorney general and, before that, commissioner of education.)

"Throughout his career, Charlie Crist has always been looking for the next rung on the ladder," says Mike Hanna, a veteran Republican operative who worked briefly for Crist during his campaign for attorney general.

Crist's conduct during the 2008 GOP presidential primary season certainly fed this perception. It's widely believed that the governor initially promised his endorsement to Rudy Giuliani, whose campaign then pursued a Florida-or-bust strategy. But three days before the Florida vote, Crist instead hitched his wagon to the ascendant McCain, who carried the state (immediately spurring the Crist-for-Veep chatter). Giuliani finished a distant third and dropped out.

Others who've watched him up-close in Florida paint a picture of an insubstantial figure, a man more interested in grabbing headlines than in the nuts-and-bolts of policy, and often disengaged or preoccupied during briefings.

Crist's defenders don't always mount convincing rebuttals to these claims. Erin VanSickle, a former communications director of the state Republican Party, acknowledges that one of the most common criticisms of Crist is "that he is policy-lite, certainly compared to his predecessor (Jeb Bush)." But VanSickle, a Crist supporter, suggests tentatively that "maybe he is a big-picture guy."

In 2008, during the period when he was under consideration for the McCain ticket, he abruptly withdrew his previous opposition to offshore drilling, a change that brought him into line with McCain's views.

During his first bid for the Senate more than 10 years ago -- he lost to sitting Democrat Bob Graham by a wide margin -- he described himself in a questionnaire as "pro-choice but not pro-abortion." He now favors a simple, GOP primary-friendly term: "pro-life."

As a state senator in the mid-'90s, Crist's record on criminal justice issues was hard-line enough to earn him the nickname "Chain Gang Charlie." He also backed a bill that required convicted criminals to serve at least 85 percent of their sentences. While running for attorney general in 2002, he sought to gain a political dividend from these positions by running what the St. Petersburg Times described as a "dark, harsh ad that features violent criminals."

Yet by 2007, Crist was arguing for the restoration of voting rights to felons and stating, "I believe in my heart that everyone deserves a second chance. They deserve an opportunity to get on with productive lives."

But these shifts pale into insignificance beside what has proved to be Crist's greatest political misstep.

In February 2009, Crist embraced, both figuratively and literally, President Barack Obama when Obama came to Florida to tout the economic stimulus package that had not yet become law.

At the time, both Obama's and Crist's favorability ratings were high in Florida. Yet not since President George W. Bush appeared to bestow a kiss upon Sen. Joe Lieberman after his 2005 State of the Union speech has a display of presidential affection so inflamed partisans.

Crist's opponents have seized on every opportunity to remind voters of The Hug, and Obama's and Crist's poll ratings in the state have declined almost in lockstep -- in part because the state's residents see little evidence that the stimulus has worked. Florida's unemployment rate is much higher than the national average, at almost 12 percent, a figure that is poised to rise further. In January, the state had the fourth-highest rate of home foreclosure in the nation.

Even former Gov. Jeb Bush, who had been expected to remain above the fray in the Republican primary despite a long history of enmity between his loyalists and Crist's, last week described Crist's support of the stimulus as "unforgivable."

At the rally with Obama, Crist said: "We know that it's important that we pass a stimulus package." By last November, he was telling CNN's Wolf Blitzer, "I didn't endorse it ... I didn't even have a vote on the darned thing."

Some see the price Crist has paid for his Obama embrace as a fitting reward for a man whose career has been defined by political expediency.

"He miscalculated a changing political environment in Florida," Rick Wilson says. "Charlie has always had a nose for the populist issue of the moment, and has been able to chase those things with success. This time, his instincts failed him."

Andrea Saul, Crist's press secretary, said that "Governor Crist has always put the people of Florida first, and if that means he is seen as opportunistic, so be it." On the specifics of the Obama hug, she said that her boss believes that "deference" is due to whoever holds the office of president of the United States.

Is there any way back for Crist?

His game plan (like that of any underdog) is to attack. His campaign is quick to draw attention to Rubio's personal finances (the St. Petersburg Times reported recently that Rubio faces debts of more than $900,000, with a net worth of just $8,351) and is hard at work trying to undermine Rubio's standing with the right, claiming that he once backed cap-and-trade legislation and a carbon tax.

"Speaker Rubio casts himself as an unswerving conservative and that is absolutely not the case," Saul says.

Those attacks come on the heels of the revelation, first published in the Miami Herald, that Rubio charged personal expenses to a Republican Party credit card during his time as House speaker. Rubio insists he sought to reimburse the party.

But for Crist, the political value of this nugget is undermined by the fact that his own ally, Jim Greer, was forced to step down as chairman of the state party in January after complaints of profligate spending by the organization and its officers.

A veteran Republican operative in Florida, Mac Stipanovich, acknowledges that "if the election were held today, the governor would lose, and I doubt he would suggest otherwise."

Stipanovich, a Crist supporter (who is not on the campaign payroll), thinks Crist will have success by challenging his opponent's conservative credentials.

"The campaign became a kind of cartoon in which Charlie became the moderate dragon that had to be slain, and Marco is the conservative knight who is up to the task," he said. "Whereas in fact both of them -- by the Republican standards of today -- are moderates."

Terri Fine, a political science professor at the University of Central Florida, suggests Crist should adopt a Florida version of a "Rose Garden strategy."

"You show the people you can govern instead of going out on the campaign trail. If [Crist] can show he can govern, it would help him overcome this 'wow-factor' about Rubio," she offers.

But, she adds, "Crist just comes across as being so two-faced."

"I'm a big sports fan and I have seen teams make some incredible comebacks," says Brett Doster. "But from a political point of view, this contest is about as close to being over as any I have ever seen."

The 53-year-old Crist has been engaged in a frenetic hopscotch from one elected office to another for much of his adult life, so it's hard to imagine what he'd do with himself if he loses this race.

Theoretically, he could drop out now and seek a second term as governor. But in practice, that's all but impossible. The Republican most likely to be his successor, Attorney General Bill McCollum, has raised serious money and built a formidable coalition and is hardly likely to step aside.

If he sticks it out and loses, some forecast a transition for Crist to a field (like academia, maybe) that would allow him to retain some public prominence and position him for a future political comeback.

Of course, the Crist campaign won't admit that any thoughts of defeat have entered their man's head. "The governor has every intention of winning this race and becoming the next senator from the state of Florida," says Andrea Saul.

These days, those sound like words spoken more in hope than expectation. But for someone like Charlie Crist, a political animal to his fingertips, there may be no alternative to fighting to the bitter end.