"The Tonight Show" returns, with all the excitement of a corporate team-building event 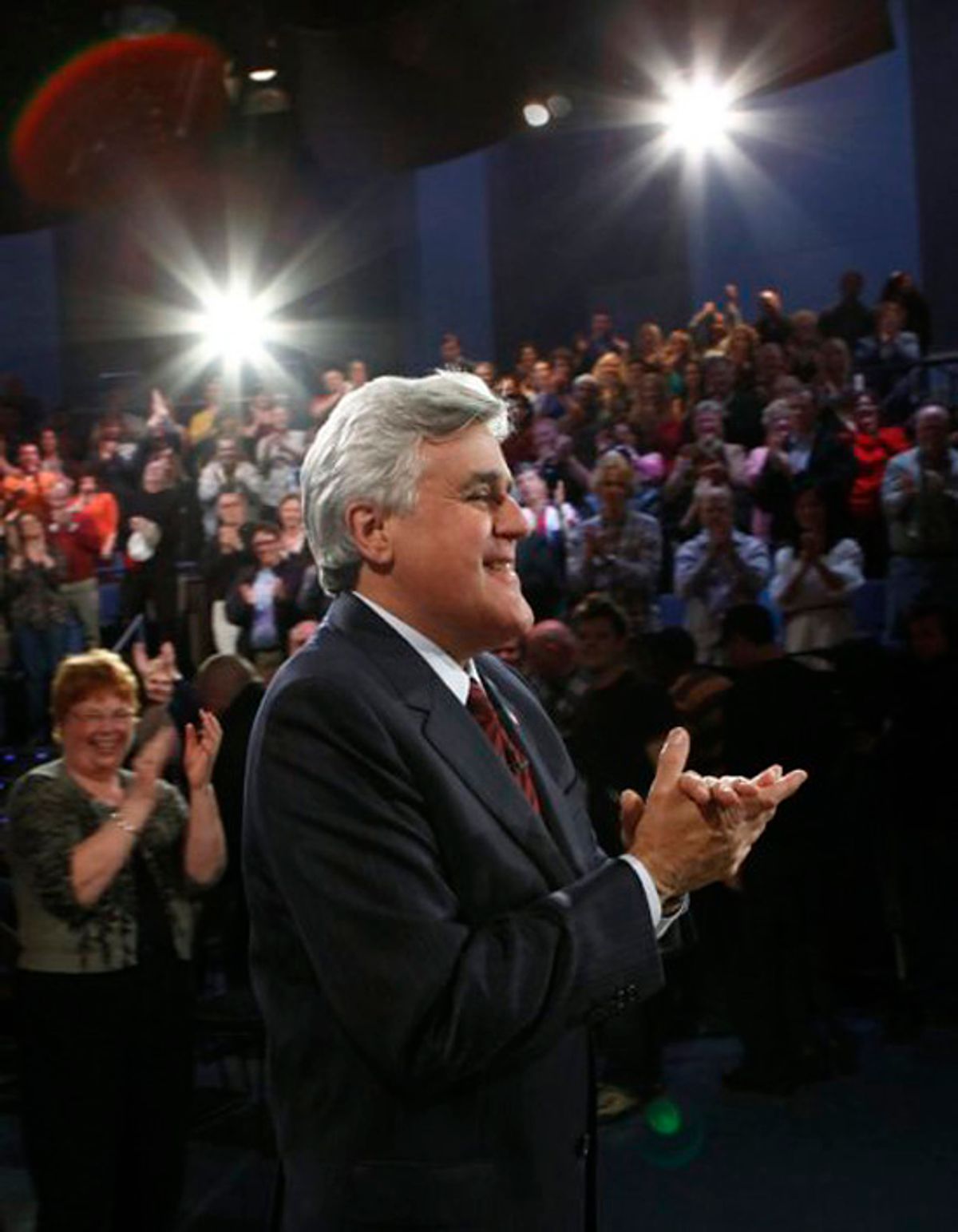 People, are you psyched? I said, ARE YOU PSYCHED? Then raise your hands in the air like you just don't care and give it up for LEN-O! LEN-O! After a month-long, Olympic-size hiatus, Jay Leno is back hosting "The Tonight Show." So when I say "Same old!" you scream "Same old!"

What's that? You'd prefer your late-night entertainment not resemble a corporate team-building event? Well, suck it, monkeys, because NBC is getting its gloat on!

It's well documented which team I played for during the Great Late Night Debacle of January. Nonetheless, I tried to approach the new era of "The Tonight Show," debuting Monday night, with an open mind. Rarely does history give one man a chance to seize back the very throne he gave up. Perhaps, humbled by his show's disastrous move to prime time and shaking off some of the public ill will of the last several weeks, Leno would return to late night a more engaging television personality. Funnier, even, like Letterman whenever he has a stalker or heart surgery or gets blackmailed. But within seconds of Monday's premiere of the all-new, just-like-last-time Leno show, it became clear that what hadn't killed Leno only made him more aggressively assured.

His return started with an obvious tableau -- sepia-toned old house, the host waking up from a crazy dream. "You were there! And you!" he said to his coterie of lickspittles. See, everybody? It's all going be OK. Betty White even showed up as Professor Marvel.

Leno then bounded back onstage to a chorus of cheers and the enthusiastic hugs of at least the first three rows. He proceeded to deliver a topical monologue that, in classic Leno fashion, veered anywhere from three months to 15 years behind the headlines. How 'bout them airlines? And hey, how boring is that Alan Greenspan? (Were that not a rhetorical question, the answer would be: As boring as this joke about him.) Dick Cheney and Keanu Reeves also made appearances, as did a joke about Tiger Woods being a "booty-ist." Leno did manage to work in references to whores and bending over, proving indeed that we're not in prime time anymore. To his credit, the guy looked ridiculously happy. Introducing himself as "your host at least for now," he had all the cocky exuberance of an Italian cardinal who's just seem a plume of white smoke with his name on it.

Ever territorial, he trumpeted Sarah Palin's forthcoming "first appearance on a late night show." Well, except for when she did "Saturday Night Live." Oh, and Conan's "Tonight Show." The host then segued into a lengthy bit about his quest for a new desk (embarrassing regular people never gets old), culminating in the proud unveiling of something that surely did time in the back of a nearby Staples. I half expected him to triumphantly urinate on it.

But Jay's excitement was nothing, nothing compared to that of his first guest, Jamie Foxx. Bouncing off the walls with the energy of an entire preschool class hopped up on Capri Suns, Foxx didn't sit down. He browbeat the audience, "When I say 'Welcome,' you say 'Back!' When I say 'Welcome,' you say 'Back!' Jay LENNNNNO!" So giddy was Foxx at the pure magical joy of having Leno back, he could barely sit to do his well-rehearsed patter about his daughter's 16th birthday party. By the time the show had come back from a commercial, he'd already regressed back into exhorting the crowd to "Give it up for Jay Leno! Do the wave!"

Foxx had trouble sitting still even as Leno moved on to his next guest, Lindsey Vonn, which led to an outburst of "USA! USA!" OMG! Viva la raza! We're here! We're queer! We will we will rock you!

Vonn decorously discussed her injuries and training diet of cheese before setting up Jay to parody her Sports Illustrated cover with his own image. Brad Paisley sang a song. Jamie Foxx shut up for a few seconds. And then, seemingly hours later, it was over. All that was missing was a celebratory drink out of Conan O'Brien's skull. In your face, America.

"It's good to be home," Leno said at the top of the show. Home, indeed, he is, victorious and complacent at the same time. And though he's spending his first week back welcoming Olympic champions, it's clear that while Leno too knows how to win, "The Tonight Show" hasn't picked up a clue about being a good sport.