In its zeal to purge sex apps, the consumer giant created an unexpected boom ... in sex apps 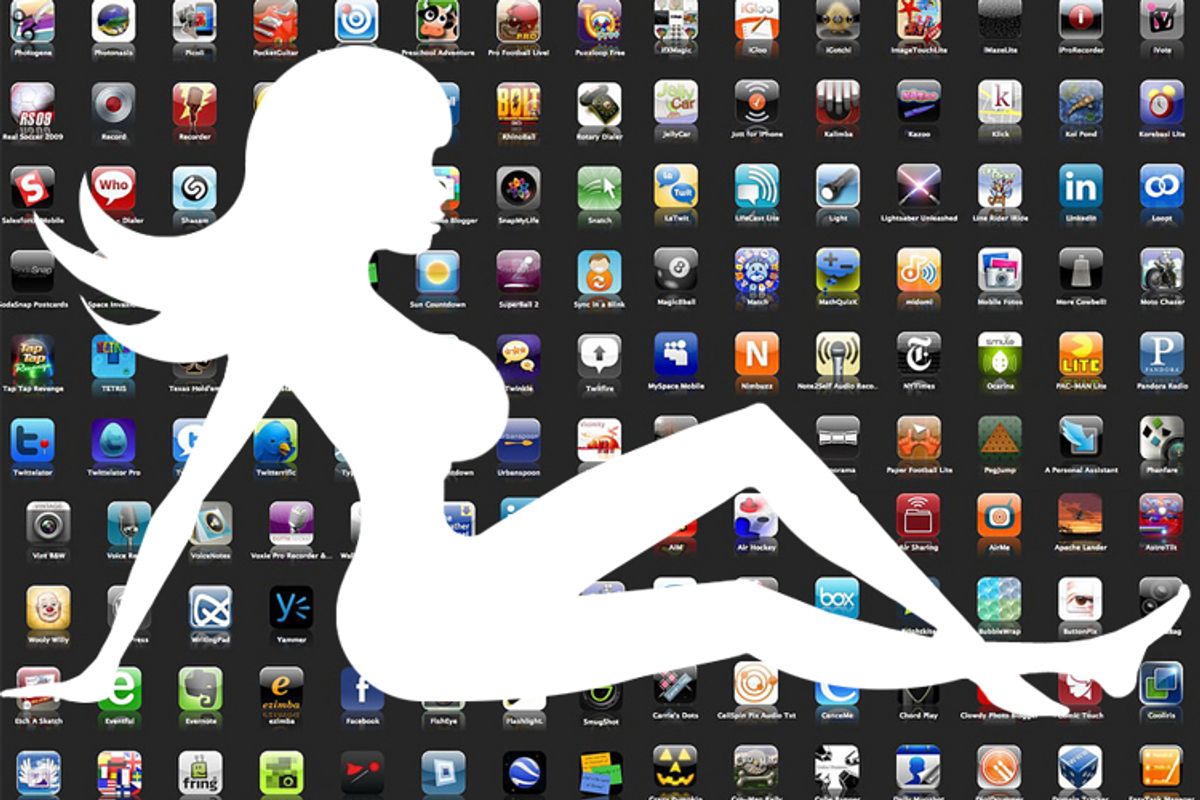 There's nothing quite like watching a big retailer try to tamp down our bottomless appetite for high jinx. Take, for example, the comedy of errors that's been unfolding over the past several weeks, ever since Apple decided to rein in its more hot and bothered apps. Over 3 billion apps have been downloaded on iTunes since the App store debuted in July of 2008, and, human nature being what is, a fair number of those involve boobies. But in light of increasing consumer complaints from, as Apple's head of worldwide product marketing, Philip W. Schiller, told the New York Times recently, "women who found the content getting too degrading and objectionable, as well as parents who were upset with what their kids were able to see,” the company began quietly removing content. In just one day in February, Apple purged over 4,000 apps.  Arrivederci, Sexy Hangman. Sayonara, Strip Poker. Hasta la vista, Suicide Girls.  In its zeal to ban booty, Apple even briefly 86'ed a benign bathing suit shopping app called Simply Beach.

But T&A fans don't go down without a fight. Faced with the encroaching threat of having their girlie bits taken away, consumers started descending on the App Store like it was a Piggly Wiggly right before a snowmageddon. Let the stripper-app hoarding commence! And when a relatively tame, cleavage-based app called Tubes!  somehow escaped the app-ocalypse, it saw its sales leap from a measly $30 a day to a frankly hilarious $10,000 in a single week. Stick it to the man, breast lovers.

Yet as Apple continues to thunder though its content, eradicating nipples wherever it finds them, it's beginning to look like maybe not all softcore apps are created equal. While the company has already nuked nearly 5,000 apps -- many from tiny independent developers -- it's left intact such apparently unobjectionable content as the Playboy app, the Xchange, which promises "frequent/intense sexual content/nudity," and the Sex Positions game, which is one of the app store's top grossers.

In the meantime, certain popular apps that were abruptly yanked have just as suddenly reappeared. The perennial top-selling Wobble – which rather tragically "enables users to move a woman's breasts without actually touching them" blazed back recently after a weeklong exile. Its current enticement? "Hurry! Apple let us back in!"

All of which serves to highlight the persistent inconsistency of deleting for content -- and how Apple has now painted itself into an odd corner. On the one hand, the plethora of SEXXXXXYGIRL apps, in recent months, has been all but swallowing up the App Store whole. If you've tried searching for entertainment or a photo app that didn't contain a whole mess of "jiggly azz," you know what I mean. When Apple had given relatively free rein to developers, developers gave the people what they want: big round butts. No wonder the store had, in truth, been a looking a little, well, trashy. And for a company that's got a pretty classy image to maintain and a brand-new, family-friendly iPad device to peddle, that's a problem.

So despite the fact that Apple gets a not too shabby 30 percent cut of each app it sells, and despite the fact that two-thirds of iPhone users are men, Apple can't afford to piss off the ladies.  Women, for starters, are the biggest consumers of games. You want to alienate the Bejeweled crowd? You do not. Furthermore, you want to alienate the consumers buying all those cute, distracting and incredibly lucrative apps for kids? Hell to the no.

But can the company figure out how to not turn the App Store into one giant Girls Gone Wild while keeping developers and knockers fans happy? Apple is still figuring its way around the issue. In late February, the company briefly offered an "explicit" category for developers to submit content -- a decision it quickly reversed. And as the company continues its quest to remove "objectionable" content, you can still download a "Slasher" app for when you're feeling stabby.  And if you can cough up $10 to go on a World at War: Zombies killing spree, have at it. It's the store's fourth biggest seller.