Apple vs. Google: The smartphone smackdown

Here come the lawyers. Could the future of mobile personal computing hang in the balance? 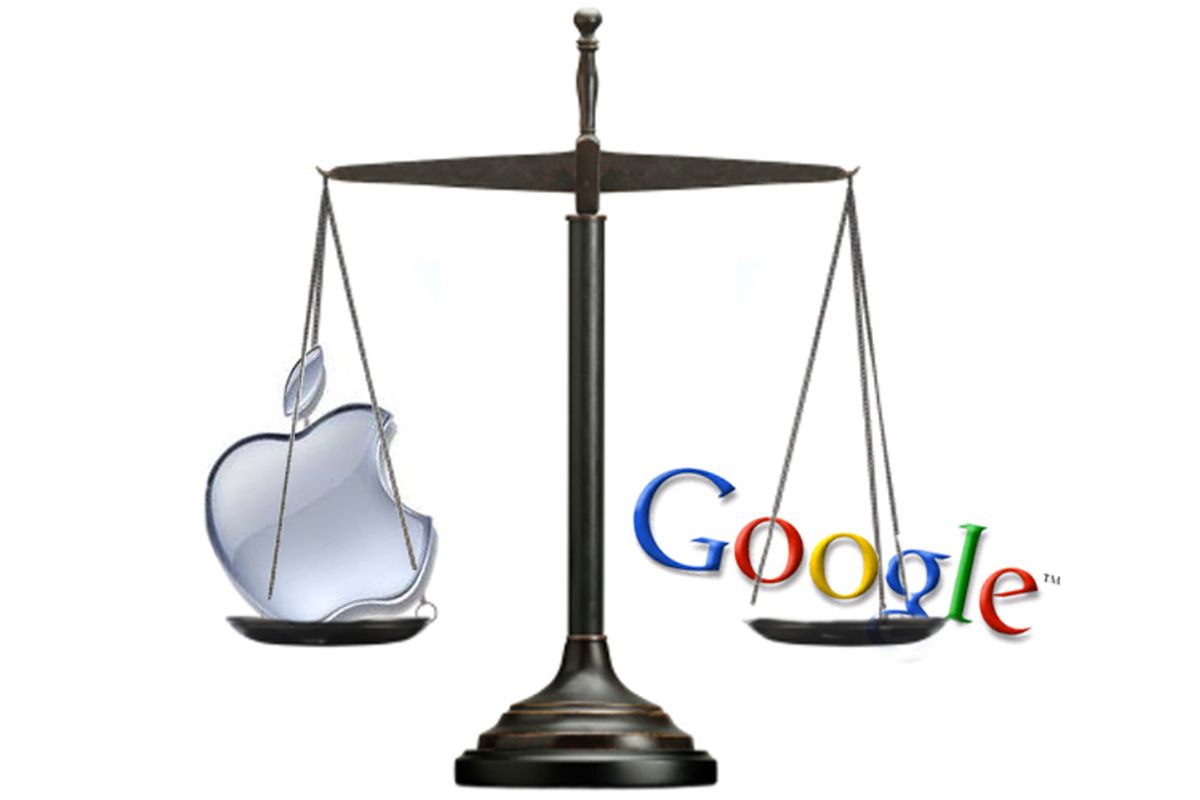 Apple's decision to sue the Taiwanese smartphone maker HTC on 20 different counts of patent infringement sent the tech world into a frenzy on Tuesday. The immediate takeaway, echoed in a thousand blogs, was that Apple's real target is Google. HTC is the leading manufacturer of phones that use Google's Android operating system, including the Nexus One.

In the wake of the news, you could practically hear the commentariat licking its collective lips. Apple versus Google has everything you could ask for in a tech war. A company that believes in absolute control in a showdown with a company that thrives on exploiting the open Internet; the coolest gadget maker in the world facing off with the cleverest organizer of information. IBM, Microsoft, Nokia ... the giants of ages past are afterthoughts in this struggle.

Apple has lodged its complaint against HTC in a federal court and, more important, with the International Trade Commission, which has the power to block imports into the United States and can make the decision to do so in an expedited time frame. This isn't the first time that Apple has gone to the ITC in an effort to quash Taiwanese competition. Way back in 1983, Apple asked the ITC to block imports of Taiwanese-manufactured clones of Apple computers.

The ITC ended up agreeing that Apple's patents and copyrights had been infringed ... and the course of computing history changed forever

In Taiwan, it's an oft-told tale -- the foundation story explaining Taiwan's ascent to computer hardware manufacturing preeminence. Back in the early '80s, scores of small Taiwan start-ups were cashing in on a craze for electronic gaming by producing a bewildering variety of arcade-style games that all had just one thing in common: They incorporated the legendary 6502 microprocessor as their heart and brains. But back then, Taiwan was still ruled under military law, and the government abruptly banned the industry in 1982 after deciding that electronic games fell under the forbidden category of gambling. Displaying a trademark Taiwanese capacity for nimble maneuvering, the game manufacturers switched gears and became personal computer makers. They were already sitting on large stocks of expensive 6502 chips, and guess what -- Apple's computers were built around that very chip. So Taiwan suddenly started pumping out Apple clones.

Apple got mad, refused to license its technology, filed its complaint alleging infringement of some core patents -- originally granted, incidentally, to some guy named Steve Wozniak -- and won an ITC injunction against imported Taiwanese clones. In response, Taiwan's clone makers switched again; they immediately started making clones of the IBM personal computer. IBM took a much more lenient approach to clone-makers, and was happy to license all relevant hardware technology.

(You can bet, by the way, that HTC is intimately familiar with all this history. One of HTC's founders, Cher Wang, previously founded Taiwan's First International Computer company in the early '80s, and by 1983 was already manufacturing cheap PCs. Her husband is the founder of Via Technologies, a microchip maker that has had numerous intellectual property run-ins with Intel, and her father is Wang Yung-ching, the founder of Formosa Plastics, a company whose critical importance to Taiwan's industrial development cannot be underestimated.)

Apple's decision to maintain absolute control of its hardware ended up consigning itself to also-ran status in the personal computer marketplace for decades. It seems a little hard to believe now, after Apple's phoenix-like resurgence, but for years many computer analysts considered the decision not to license its hardware and software a huge strategic error that allowed Microsoft to become all powerful, and doomed Apple to irrelevant niche-status. But for whatever it's worth, the company has never strayed too far from its original DNA, as proven by the suit against HTC (and perhaps by its censorious control of the iPhone App store). Meanwhile IBM doesn't even make computers anymore, and Microsoft watches the all-conquering iPod and iPhone and gnashes its teeth.

For now. Because the obvious question raised by our diversion back to the 1980s is just how much will history repeat itself? Google has chosen IBM's approach, licensing its software to all and sundry, unconcerned with the prospects of scores of Android phones competing with its own Nexus One. Apple remains Apple, determined to keep its shop closed, and ready to sue where it thinks its intellectual property has been stolen. Taiwan, again, is the middleman. But the last time this storyline went down, Apple was punished in the market place. Could the same scenario play out with smartphones?

It's hard, from my lawn chair perspective, to see Apple's strategy achieving anything more than a minor slowdown in the proliferation of ever-more powerful smartphones. I make no judgment as to the validity of the patents, but I don't think Google and HTC will be as easy to shut down as a bunch of tiny early '80s Taiwanese clone makers. But what we do know from history is that when there is more competition, innovation thrives. As consumers, we stand to benefit from lots of different smartphones manufactured by scores of competitors. As consumers, we could lose, if Apple wins.