Bachmann and Grayson: A diary of crazy 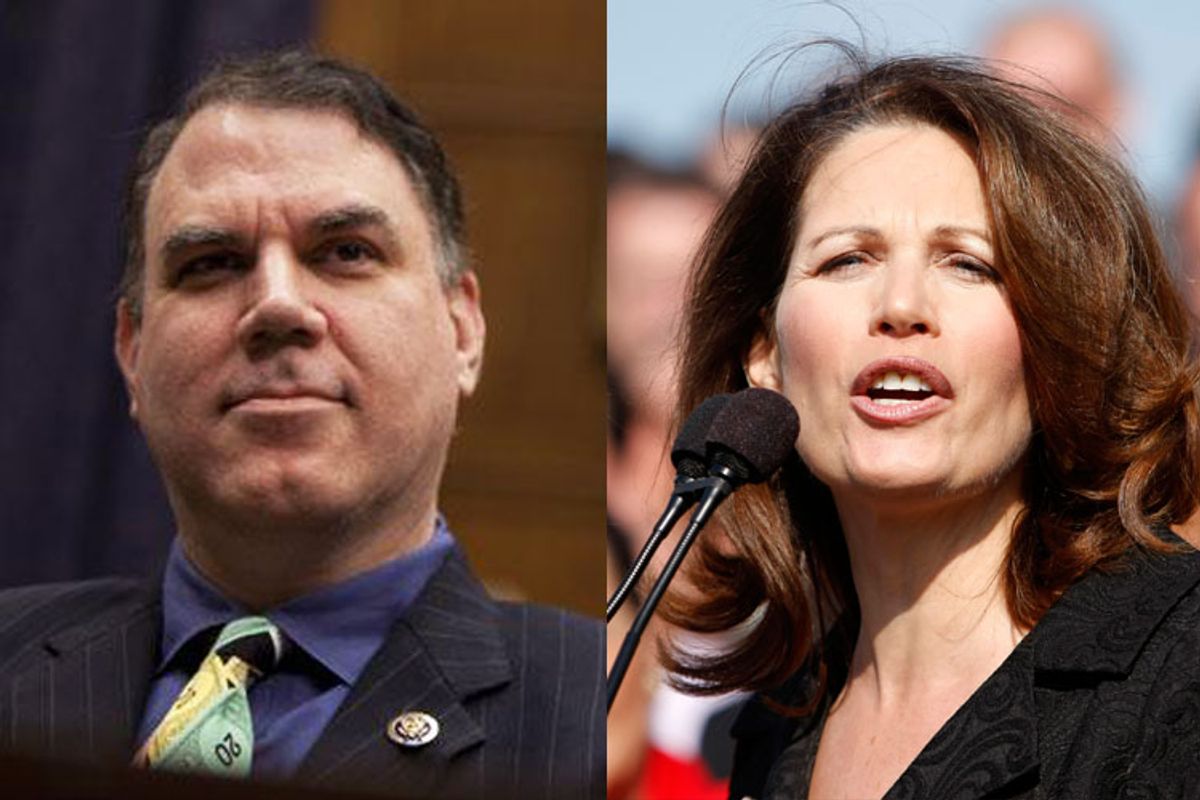 Lincoln vs. Douglas. Voltaire vs. Rousseau. Huxley vs. Wilberforce. And now: Bachmann vs. Grayson.

Leave it to Larry King to bring together these two towering intellects for a nationally televised debate on healthcare reform on Wednesday night. Republican Michele Bachmann and Democrat Alan Grayson are the Candy Stripers of Crazy of their parties. And on this issue in particular, they shine.

Bachmann, in case you don’t remember, is the carbon-dioxide-is-a-good-thing congresswoman from Minnesota’s 6th Congressional District. Among her greatest hits: warning just before the 2008 election that then-candidate Barack Obama “may have anti-American views.”

On healthcare, she’s been known to warn of completely fictitious death panels on the House floor and to implore her supporters to “slit our wrists” to prevent healthcare reform from passing.

Grayson, an Orlando congressman, nabbed his 15 minutes last September with a House floor speech that, at least on style, surely made Bachmann proud. “If you get sick in America,” he roared, “the Republican healthcare plan is this: Die quickly.”

(Full disclosure to readers: Bachmann and Grayson are fraternal twins separated at birth by an evil genius from Marvel Comics -- a genius who is now sitting back in his chair, stroking a black cat, and laughing diabolically at the madness he’s unleashed on America.)

Salon plopped down in front of a television Wednesday to watch the crazy-thon that took over King’s show for the night.  We watched, so you wouldn’t have to. Some of the highlights (if you can call them that):

Ugh. Larry King, who I’m guessing hasn’t read “Robert’s Rules of Order” too recently, is asking Bachmann about procedures in the Senate, a body of which she is not a member.

“That’s not how the Senate works,” Bachmann nonetheless lectures. “The Senate works with 60 votes.” And on and on. Predictably, she describes the idea of ramming a bill through the Senate with a simple majority (under reconciliation) as the “nuclear option." And she's shocked, just shocked that the Democrats would tinker with cherished parliamentary procedures to get a healthcare bill through. Grayson follows by saying that the last White House resorted to similar chicanery.

Bachmann calls it a “job killer” and lapses into the tired “government takeover of 18 percent of the economy” bit. Massive tax increases; vulnerable seniors being out on the curb to rot and die; a 100 percent increase in taxes in 10 years -- she's faithful to the talking points.  (And since she said it, it must be true!) “There is not a lot of upside,” she summarizes. Clearly.

Not to be outdone, Grayson shoots back: “That’s simply not the case.” Bam! We spend 17 percent of our income on healthcare, he says. We die young compared to people in every corner of the globe (even Cuba, for God’s sake!). Babies are dying on account of our hospitals are mud-floored huts. “The system is broken. It needs to be reformed,” he declares. Well, clearly.

*King cuts to the chase with both guests: “What’s your solution, in a nutshell?”

Bachmann goes on about tax-free money, the cost of healthcare. And blah blah blah.

Grayson (or as King called him, “Graysman”) flashes his shank, reeling off some statistics from the Congressional Budge Office before dropping this one: “There are 122 people who are dying every single day in this country because they have no healthcare." Sounds like that old Republican plan!

* King inquires why everyone in the Capitol building can’t just get along.

“I think that we can come together!” Bachmann insists.  Obviously, this is the setup to blame the Democrats. “But I think a big question that has to be addressed right now, Larry, is what in the world is going on in the White House?" Oh yeah. That’s the Michele Bachmann I know. What is going on in the White House? That's exactly the question that needs to be addressed. Forget about this healthcare stuff. Tell us more, Michele.

For what it matters, Obama reportedly invited 10 House Democrats to the White House Wednesday night to try to get them to vote yes on the upcoming bill. Among them was Jim Matheson of Utah. On Wednesday Obama nominated Matheson's brother Scott M. Matheson, Jr. to the United States Court of Appeals for the 10th Circuit. So, what else do you need to know?  We here at Salon are already calling it Judge-Health-Gate. Or Matheson-Gate. Or, dude-sold-his-vote-for-his-brother-Gate. The key is, it's a -Gate.

“We really need to have an independent investigation into this matter,” Bachmann announces. “Is the White House trading healthcare votes for judgeships?” Bachmann asks, as if we don’t already know the answer, which is, “Yes.”

Grayson’s comeback is that Bachmann is “deploying another weapon of mass distraction.” Lame. “Corruption is not a distraction!” Bachmann cuts in. Grayson tries again. “The issue here is that we need affordable healthcare in this country ... If you want to go off on a tangent, you are doing a disservice to the American people.” Tell us about it.

“Corruption isn’t a tangent,” Bachmann responds. “This is a very real issue. We need an independent investigation. This is pretty serious if you offer a judgeship to a brother of a member of Congress and the same night you have that member at the White House, where the president is twisting his arm to ask that member of Congress to switch his vote on healthcare?”

Grayson is left insisting that a healthcare bill would pass. (Weak.) King promises that in the weeks ahead “we are going to talk a lot on this subject.” And he pledges, “And we are going to have both of you back.”

Is that a promise or  threat?