Save the dolphins! Save the corporate-slave cows! In the most political of Oscar categories, voters must choose 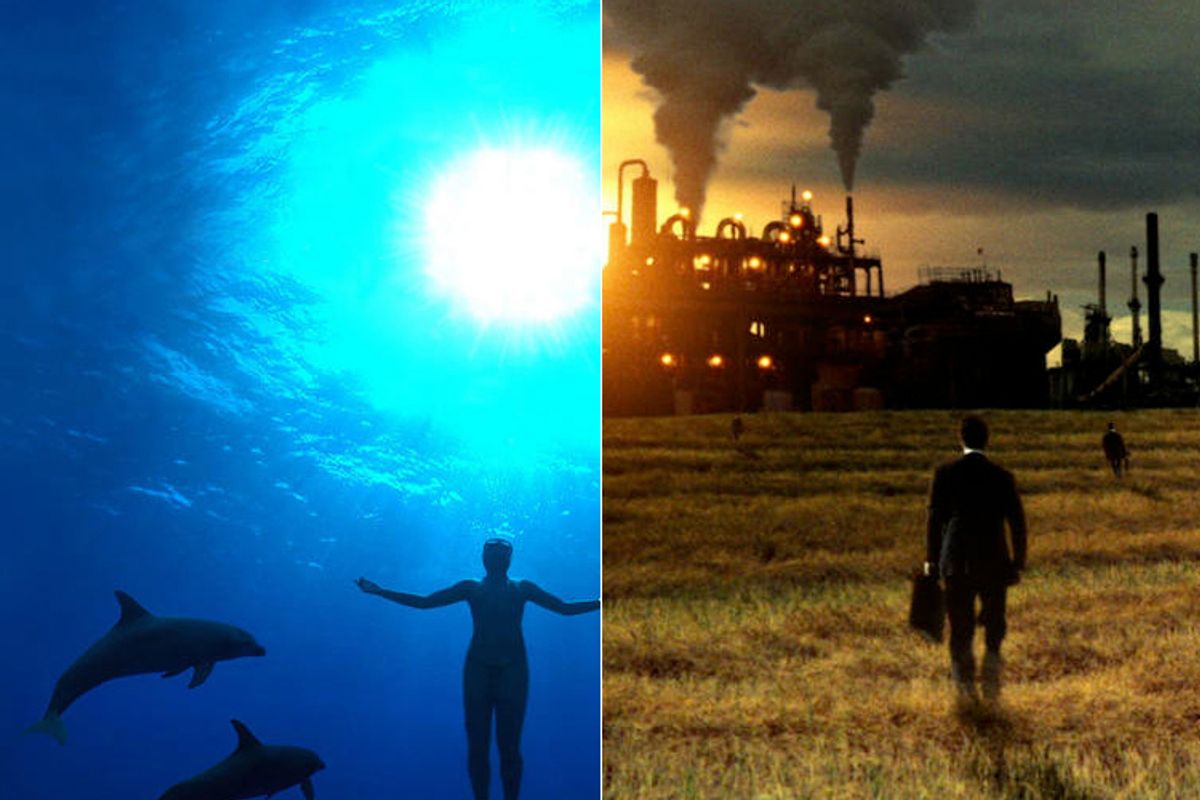 OK, Hollywood. It's showdown time. Cows or dolphins? Bossy or Flipper? In the hero role: Gnarled one-time Sea World trainer, or book-learnin' foodie intellectual? As the villain: Faceless, ginormous no-comment corporations, or bland, lying bureaucrats? The stakes? Well, they're not all that high, to be truthful. The winner gets the entire world's attention for exactly 30 seconds and gets to sell a bunch of DVDs. Beyond that, will anything change? That's anybody's guess.

This year's documentary Oscar race is widely seen, rightly or wrongly, as a head-on collision between two consciousness-raising, global-issue docs, of exactly the kind that have dominated the category in recent years. In one corner is former National Geographic photographer Louie Psihoyos' "The Cove," an exciting, if occasionally gruesome, exposé about the massacre of dolphins in a secluded Japanese bay. In the other is documentary veteran Robert Kenner's "Food, Inc.," an investigative collaboration with writers Michael Pollan and Eric Schlosser that hopes to spark wide public debate about the costs of industrialized food production and the local-and-organic movement.

Both films have broad social and environmental goals in view, but they're very different in terms of style and tone (as well as in terms of box-office results). In "The Cove," Psihoyos and dolphin trainer-turned-activist Ric O'Barry want to use one horrifying but seemingly minor and local issue -- the annual roundup and slaughter of dolphins in Taiji, Japan -- as a key that unlocks a larger set of issues: our short-sighted and greedy stewardship of the oceans and our despotic relationship with the species that seems closest to us in intelligence. (Maybe dolphins aren't as smart as they seem, though; how can they still be so friendly after everything we've done to them?) This metaphorical tale is framed, as Psihoyos has put it, as a mixture of Jacques Cousteau special and 1970s James Bond film.

Yet while the cinematic qualities of "The Cove" had critics (me included) falling all over themselves, it was the more didactic, informational, TV-style "Food, Inc." that proved far more successful with audiences. (This is a topic for another time, but the critical truism that the public doesn't like didactic, political message movies is almost 100 percent false. See also: Cameron, James, recent career of.) Crawling slowly around the country through every middle-size city and college town, "Food, Inc." gradually accumulated a gross of about $4.5 million. That might not sound impressive -- it's about 0.6 percent of "Avatar's" domestic take -- but it looks good compared to "The Cove," which has made less than $900,000.

"Food, Inc." isn't just a message movie, it's a movement movie. And the social movement in question -- the local-organic resistance to corporatized, industrial agriculture -- is one that finds itself at an important germinal stage, just on the cusp of widespread acceptance. As Michael Pollan said in an interview before the film's release, local-organic is about where environmentalism was just before the first Earth Day in 1970 -- no longer freakish, but not mainstream either.

Now, Academy voters tend to be older and culturally rather conservative, even if their social views are liberal. They don't exactly represent the "Food, Inc." demographic, and may not want to think too hard about where the veal comes from that is served so elegantly at fine dining establishments of western Los Angeles County. In that regard, maybe the bravura cinematic qualities and the clear-cut morality of "The Cove" make it a safer bet in your office pool.

Let's fend off overconfident-prognosticator disease right now by noting that the documentary vote is notoriously unpredictable, even compared to other Oscar categories. Academy voters might well choose between Flipper and Bossy by selecting neither. (Last year, "Man on Wire" won over presumed favorite "Trouble the Water"; two years ago, Alex Gibney's little-seen "Taxi to the Dark Side" triumphed over Michael Moore's "Sicko" and Charles Ferguson's "No End in Sight.") There are three other nominees this year, all eminently worth seeing: Anders Østergaard's "Burma VJ," a chronicle of the 2007 Burmese uprising, mostly shot by clandestine reporters inside that closed country; Judith Ehrlich and Rick Goldsmith's "The Most Dangerous Man in America: Daniel Ellsberg and the Pentagon Papers"; and Rebecca Cammisa's wrenching "Which Way Home," which follows the stories of Mexican children traveling to the United States on their own.

Still, there's no question that the genteel and largely amicable contest between "The Cove" and "Food, Inc." is the main event, and one that demonstrates how much the docu-Oscar category has become a bully pulpit through which Hollywood airs its collective social grievances. Once upon a time, and not that long ago, the Academy's documentary competition was something else entirely: a realm of hushed, somber historical films -- often but not always Holocaust-related -- and life-affirming journeys with classical musicians, famous writers, outdoor explorers and/or children. The Oscar-winner in 1965 was "The Eleanor Roosevelt Story." In 1975, "The Man Who Skied Down Everest." In 1980, "From Mao to Mozart: Isaac Stern in China." In 1993, "I Am a Promise: The Children of Stanton Elementary School."

But you can see the entertainment industry's guilty-liberal, semi-activist conscience emerging as early as Barbara Kopple's breakthrough labor doc "Harlan County, USA" in 1976. There have been sporadic eruptions of left-wing sentiment ever since, as in "The Times of Harvey Milk" in 1984 and the surprising and controversial choice of "The Panama Deception" in 1992. And then came the explosion of the 2000s, the decade of "Bowling for Columbine," "An Inconvenient Truth" and "Taxi to the Dark Side," when the documentary Oscar began to feel like the semi-official opposition to Fox News, or an avenue for agitating against the Bush-Cheney regime and associated right-wing orthodoxy.

As almost anyone in the documentary world will tell you, Academy voters have been and continue to be exceptionally conservative when it comes to issues of art and craft, preferring straightforward message-delivery to any kind of ambiguity or aesthetic ambition. Revered cinéma-vérité pioneer Frederick Wiseman has no Oscar nominations on his 40-year résumé, while Albert and David Maysles ("Gimme Shelter," "Grey Gardens") were nominated just once, for a 1974 short. (They didn't win.) This year, R.J. Cutler's fascinating glimpse behind the scenes at Vogue magazine, "The September Issue," was ignored, as were Wiseman's "La Danse: The Paris Opera Ballet" and French New Wave pioneer Agnès Varda's autobiographical "The Beaches of Agnès." Each of those is a disheartening omission; taken together, they have to be filed under Some Things Never Change.

Still, given the reality that mainstream American documentary filmmaking has become a coffee-house debating society for various strands of global-progressive-environmental ideology, the Academy could do a whole lot worse. Both "Food, Inc." and "The Cove" are meaty, well-crafted and provocative works of advocacy. Both deserve to reach wider audiences, and -- who knows? -- maybe they'll even reach a handful of viewers who don't already agree with their positions. Now, is this highly politicized era of documentary-Oscar history superior to the one that produced "Robert Frost: A Lover's Quarrel With the World" (1963) or "Who Are the DeBolts? And Where Did They Get Nineteen Kids?" (1977)? Let history judge.