President launches final push towards passage with speech, says he wants vote in "next few weeks" 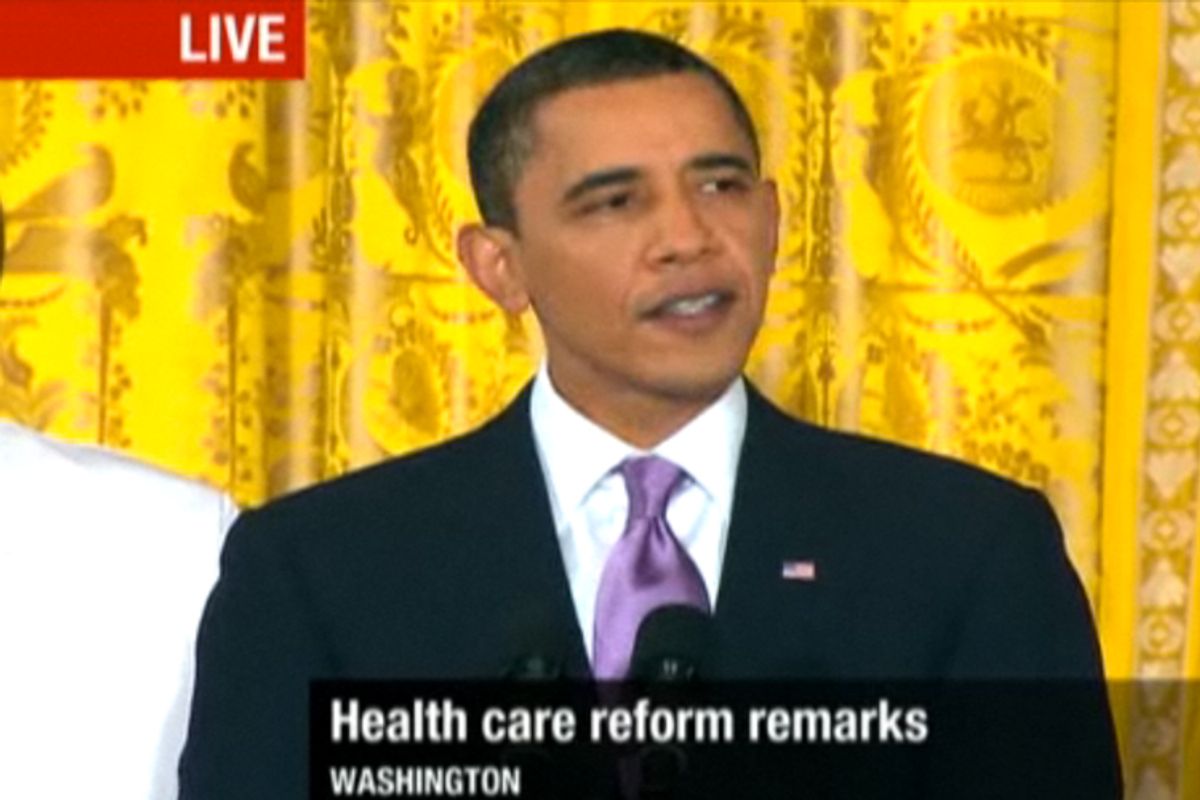 In a speech Wednesday afternoon, President Obama kicked off what he and fellow Democrats hope will be the final push towards passing healthcare reform.

For the most part, Obama was just going back over ground he's already covered plenty of times, discussing what's in his proposal and the rationale for it. As he himself said, drawing a laugh from the crowd, "Everything there is to say about healthcare has been said and just about everyone has said it."

But there was something new in the president's speech -- an outline of how this last effort to get the legislation passed will go, and a case for using reconciliation.

"I believe the United States Congress owes the American people a final vote on health care reform," Obama said, to a loud round of applause from those in attendance. "Reform has already passed the House with a majority. It has already passed the Senate with a supermajority of sixty votes. And now it deserves the same kind of up-or-down vote that was cast on welfare reform, that was cast on the Children’s Health Insurance Program, that was used for COBRA health coverage for the unemployed, and, by the way, for both Bush tax cuts -- all of which had to pass Congress with nothing more than a simple majority.

"I have therefore asked leaders in both houses of Congress to finish their work and schedule a vote in the next few weeks. From now until then, I will do everything in my power to make the case for reform."

The "up-or-down vote" language is code for a Senate procedure known as reconciliation, the use of which will prevent Republicans from filibustering. It's the White House's favored message, used to counter inevitable GOP charges -- already launched -- that Democrats are using an obscure Senate procedure to subvert the will of the American people and jam the bill down their throats.

Obama also used the opportunity to hit hard against Republican rhetoric on healthcare generally. It's a contrast to the bipartisan tone he'd been striking for the summit last week, and a clear rhetorical turn, an attempt by the White House and other Democrats to say to voters: "We tried to be bipartisan, and they weren't having it, so we have to do it this way."

Addressing calls from the Congressional GOP to drop the current bill and start over, Obama said, "I do not see how another year of negotiations would help. Moreover, the insurance companies aren't starting over. They are continuing to raise premiums and deny coverage as we speak. For us to start over now could simply lead to delay that could last for another decade or even more. The American people, and the U.S. economy, just can't wait that long."

Finally, the president ended his speech with a moment of visible passion, his voice rising and becoming firmer as he said, "The American people want to know if it's still possible for Washington to look out for their interests and their future. They are waiting for us to act. They are waiting for us to lead. And as long as I hold this office, I intend to provide that leadership. I don't know how this plays politically, but I know it's right. And so I ask Congress to finish its work, and I look forward to signing this reform into law."