Will Charlie Rangel stay or will he go? 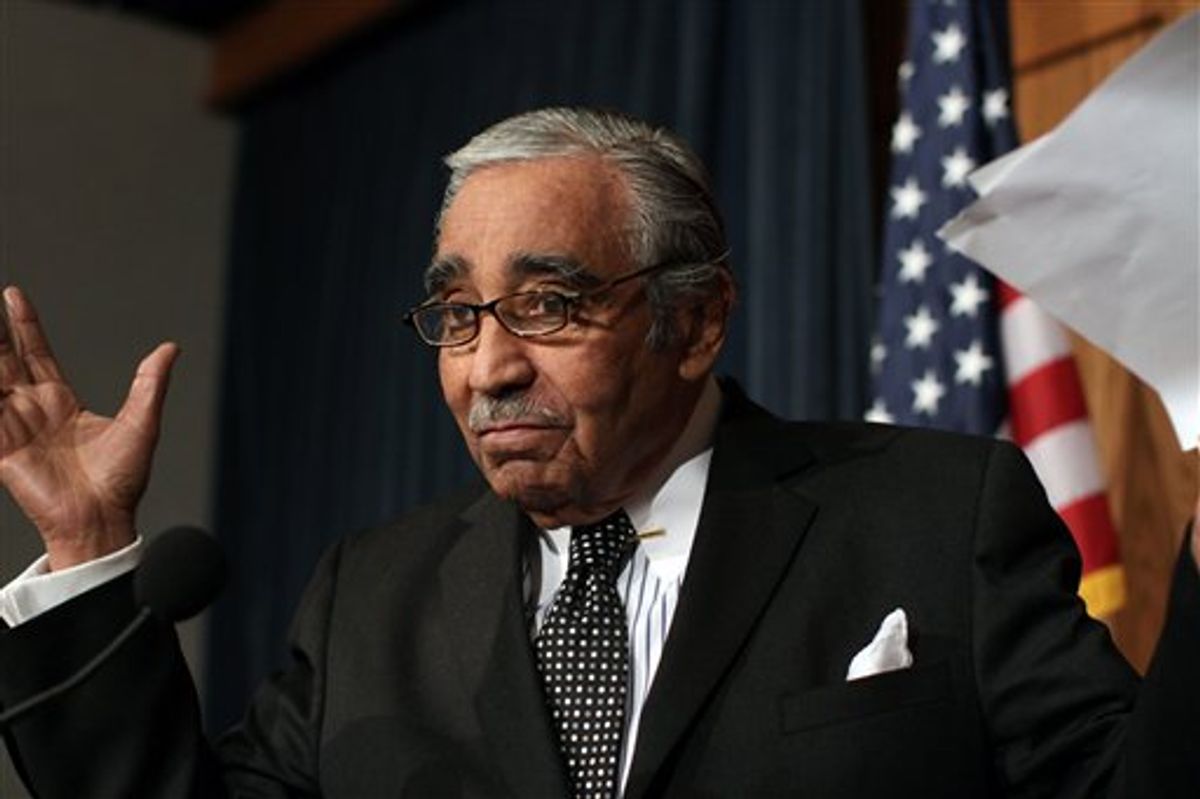 If Rep. Charlie Rangel, D-N.Y., is stepping down as chairman of the House Ways and Means Committee, apparently it's news to him.

NBC News reported Tuesday night that Rangel would give up his post in the wake of an ethics panel's finding that he broke House rules. That would help House Speaker Nancy Pelosi out of a political jam; Republicans are already trying to turn attention to the allegations against Rangel and how Democrats respond.

But this election year, good news for Democrats is in short supply. And so on his way out of a meeting with Pelosi, Rangel denied any such deal was in the works.

"You bet your life," he told reporters, when asked if he was still the chairman. Asked if he had agreed to temporarily step down, he answered, "No, no." Someone asked him whether Pelosi had asked him to resign, at least temporarily. "She told me not to say a damn thing," he answered.

He grinned playfully as he waited for an elevator to whisk him away from the media. Someone shouted out, once more, a question about whether he was still chairman. "Yes," he declared, loudly. "And I never lie to the press."

A couple of minutes later, Pelosi scurried out the back door of the room where the meeting was held and ducked into another elevator. "No comment, no comment," she said, waving her arms.

Having served in the House for more than three decades, Rangel's a very senior Democrat, and he seems to enjoy the perks that come along with that, like the committee chairmanship. It's going to be interesting to see whether he'll want to remain in the House at all if he's not heading up Ways and Means; in 2006, he said he'd retire if the Democrats didn't win a majority and thus give him a gavel.

A number of House Democrats -- including one member of the Congressional Black Caucus, which Rangel was a founding member of, Rep. Artur Davis, D-Ala. -- said Tuesday he should step aside as chairman. The GOP plans to introduce a resolution Wednesday calling on him to do just that, as a way of pressuring vulnerable Democrats.

The situation isn't quite the same as the scandals that embroiled Republicans like Duke Cunningham and Tom DeLay as the majority slipped from the GOP's grasp four years ago; Rangel is accused of accepting a free trip to the Caribbean, of improperly using his office to raise money for a City College program named after him and of failing to pay taxes on about $70,000 in rental income from a property he owns in the Dominican Republic. Cunningham, meanwhile, pleaded guilty to taking $2.4 million in bribes, and DeLay was charged with violating Texas campaign finance laws (and was closely tied to disgraced lobbyist Jack Abramoff, who now resides in a federal prison camp).

But the GOP, which doesn't look back very fondly on the constant stream of questions and stories about whether Republicans would distance themselves from Cunningham and DeLay, is already trying to use the same template against the Democratic majority. Republican aides gleefully e-mailed around copies of news stories Tuesday on vulnerable Democrats returning campaign contributions from Rangel.

In the face of all that, exactly how long he can hold on isn't clear.