The full-scale collapse: From Murrow to Blitzer

When discussing the McCarthyite DOJ witch hunt spawned by Liz Cheney and Bill Kristol, I wrote yesterday:  now that "we have real, live, contemporary McCarthyites in our midst -- Liz Cheney and Bill Kristol -- launching a repulsive smear campaign, we'll see what the reaction is and how they're treated by our political and media elites."  On Twitter yesterday, I wrote:  "How media figures treat Liz Cheney after her vile McCarthyite smear campaign will say a lot about their character."

CNN's Wolf Blitzer spoke volumes today about himself and his "news network."  First, on Twitter earlier today, he excitedly promoted his upcoming story about what he called the "intense debate about Obama Justice Dept bringing in lawyers who previously represented Gitmo detainees."  On March, 9, 1954, Edward R. Murrow famously devoted his entire broadcast to vehemently condemning Joseph McCarthy's witch hunts, declaring:  "This is no time for men who oppose Senator McCarthy's methods to keep silent."  By contrast, Wolf Blitzer -- receipient of an Edward R. Murrow award -- sees such smear campaigns as nothing more than an "intense debate" to neutrally explore and excitingly promote.

The last thing I would ordinarily do is watch a Wolf Blitzer broadcast, but I knew that this was going to be a heinously illustrative episode in modern political journalism -- at best the vile McCarthyite campaign was going to be presented in the standard "each-side-says" format which defines modern journalistic "objectivity" -- but it was far worse than even I expected.  Blitzer first teased the segment as this on-screen logo appeared, taken directly from the Cheney/Kristol ad:  "HAPPENING NOW: DEPT. OF JIHAD?" 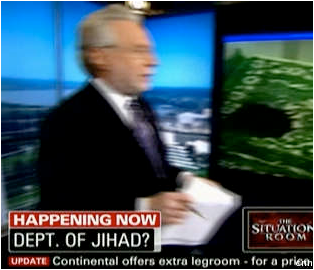 The next time he teased the story, CNN flashed this logo -- "Al Qaeda 7?" -- also taken directly from the Cheney/Kristol ad, as Blitzer explained that numerous Justice Department lawyers have been -- as he put it -- "accused of disloyalty" by a national security organization headed by Liz Cheney.  The final Blitzer tease came as these words were flashed on the screen:  "Are Justice Dept. lawyers disloyal?"

The story itself began when Blitzer posed this question:  "Should there be a loyalty test over at the Justice Department?"  He then introduced CNN Homeland Security Correspondent Jeanne Meserve, who -- echoing Liz Cheney -- introduced her segment by asking about the Obama DOJ:  "Should it really be called the Department of Jihad"?

Meserve's segment then included, without any judgment, various opinions on these questions, with "some" saying that lawyers shouldn't be judged by the clients they represent while "others" explained that these lawyers' presence in the Justice Department presents a serious national security issue.  None of the facts compiled earlier today by ABC News' Jake Tapper -- such as the fact that the Bush DOJ also hired lawyers who had represented Guantanamo detainees, just as Rudy Giuliani's firm had, without any objections from the Right -- made it into CNN's story, as I knew would happen.

Following Meserve's breezily neutral, "each-side-says" report, Blitzer hosted a "debate," featuring right-wing lawyer Victoria Toensig defending the Cheney/Kristol crusade, and some criminal defense lawyer meekly and lamely objecting to some (though not all) of Toensig's arguments.  Blitzer passively let Toensig ramble uninterrupted and dominate the exchange, asking not a single challenging question.  The entire time as Meserve's story itself was being broadcast and the "debate" took place, this was the logo CNN had on screen:  "DEVELOPING STORY - ARE JUSTICE DEPT. LAWYERS DISLOYAL?"  The two segments, from start to finish, were constructed based on the exact McCarthyite narrative Cheney and Kristol puked up, and although Blitzer did note that even some Bush officials found the ad to have gone "too far," the entire 30 minutes of broadcast time -- both when the story was repeatedly previewed and when it finally appeared -- continuously reinforced the smears with both graphics and Blitzer's words.

As Atrios put it:  "right wing lunatics can still push anything into the puke funnel."  They can not only push it into the puke funnel, but ensure it goes largely unchallenged, even bolstered by mindless media techniques.  Edward R. Murrow led the media attack on the McCarthyism of the 1950s.  Wolf Blitzer plays mindless, amiable, neutral, amplifying host to identical smear campaigns of today.  That collapse says all one needs to know about much of modern establishment political journalism in the United States.

UPDATE: Regarding media responsibility in the face of this repugnant smear campaign: more here.