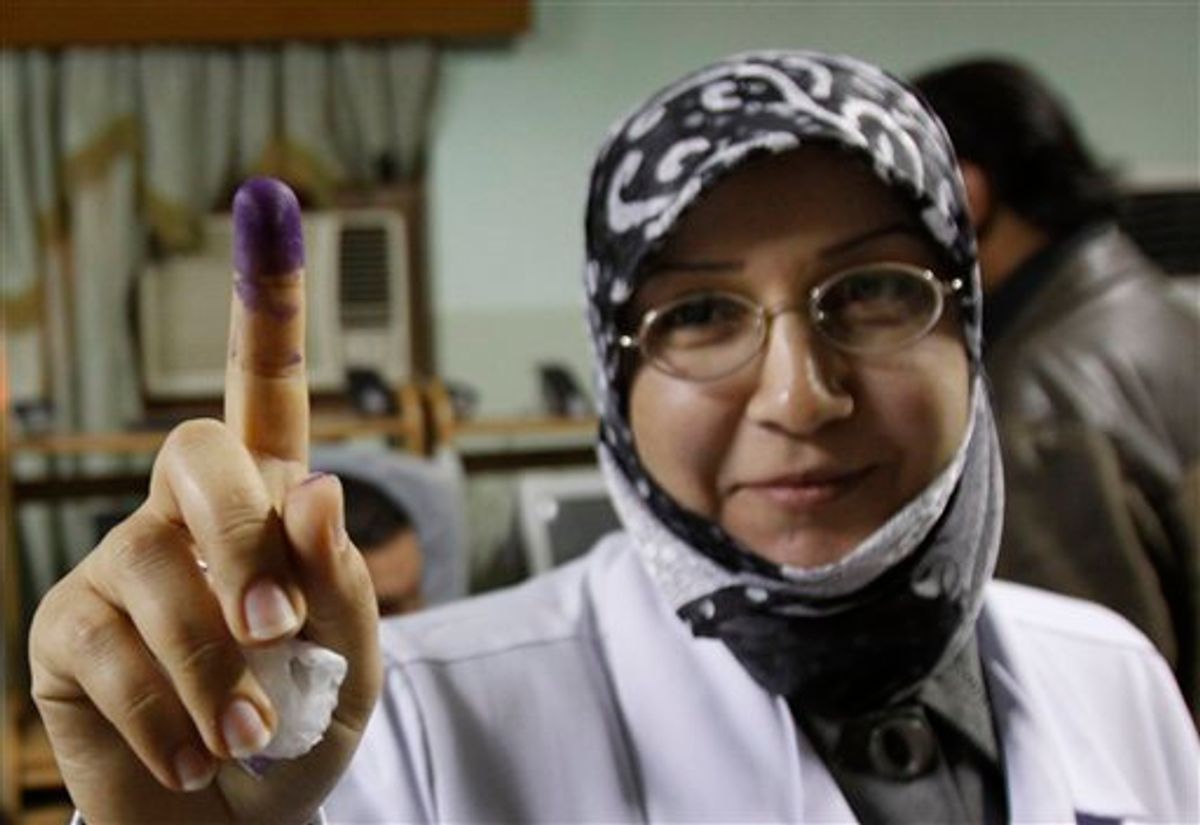 Insurgents have repeatedly threatened to use violence to disrupt the elections, which will help determine who will oversee the country as U.S. forces go home. It is also a test over whether the country can overcome its deep sectarian divides. Two of the blasts hit voters outside polling stations.

Baghdad was a tense city Thursday as thousands of troops deployed across the capital, and convoys of army trucks and minibuses ferried soldiers and security personnel to and from polling stations.

Many stores were shuttered, and normally crowded streets were near empty as people appeared to be staying home on what was a holiday across the country.

A sandstorm blowing into the capital also gave the already empty streets an even more eerie feel.

"Terrorists wanted to hamper the elections, thus they started to blow themselves up in the streets," said Deputy Interior Minister Ayden Khalid Qader, who's responsible for election-related security across the country.

He said security measures prevented the bombers from reaching polling places so they struck at voters en route. Many of the victims were believed to be security personnel -- the main group casting their ballots early voting since they work on election day.

Thursday's voting is for those who might not be able to get to the polls Sunday, including detainees, hospital patients and medical workers.

The United Nations Assistance Mission to Iraq estimated that between 600,000 and 700,000 people could vote Thursday. About 19 million of Iraq's estimated 28 million people are eligible to vote in the elections, which will also see Iraqi expatriates cast ballots in 16 countries around the world.

In the first attack, a Katyusha rocket killed seven people in the Hurriyah neighborhood about 500 yards (meters) from a closed polling station, police said.

Early reports said the blast had been caused by a bomb hidden in garbage.

The second attack took place in the upscale Mansour neighborhood when a suicide bomber detonated an explosive vest near a group of soldiers lining up at a polling station, killing six and wounding 18, police said.

The blast left a small crater in the middle of the street, and debris from the explosion splattered around the crater. Pools of blood and burnt human flesh littered the ground along with broken glass, rubble from buildings and the remnants of shops signs.

In the third blast, another suicide bomber blew himself up near policemen waiting to vote, killing four people and wounding 14 others, according to police and hospital officials.

All the officials spoke on condition of anonymity because they were not authorized to speak to the media.

U.S. and Iraqi officials have warned that insurgents could launch attacks in an attempt to disrupt the vote. On Wednesday, a string of suicide bombings in the city of Baqouba left 32 Iraqis dead.

Sunday's elections are only Iraq's second for a full parliamentary term since the 2003 U.S.-led invasion ousted Saddam Hussein, leading to the eventual creation of the Shiite-dominated government in power today.

At a high school in Baghdad's Karradah neighborhood, police and military officials crowded in to the building to cast their ballots, displaying the now-iconic purple ink -- used to prevent people from voting twice -- on their fingers.

Many expressed frustration at the government and a desire for change.

"The people who are in government, they did nothing for the country and if they return to power, they will do nothing again," said Jolan Ali Hossein, a police officer.

Others said they were excited about being able to vote and help usher in a new political era in Iraq.

"In the past we used to make change through violence. Now we have democracy," said Hamza Abbas, another police officer.

In the town of Nimrod in the northern province of Ninewa, policeman Anwar Khames said he was voting for Prime Minister Nouri al-Maliki's State of Law Coalition.

"He did one good thing, overcoming the sectarian violence, especially in Mosul. Before, I was not able to go to Mosul. Now I can go, but I am still cautious," he said.

In Saddam Hussein's former hometown of Tikrit, police 1st Lt. Ahmed Abdul-Hamza said he did not vote in the 2005 election but decided to vote this time because "this election will be a decisive one in Iraq's history because the coming government will lead Iraq when the U.S. forces leave."

There were scattered reports across the country Thursday of people showing up at the polls and not being able to find their name on the voting records.

A senior electoral commission official, Qassim al-Aboudi, said during a news conference that people who are not able to find their names on the voting records will be able to cast a provisional ballot.