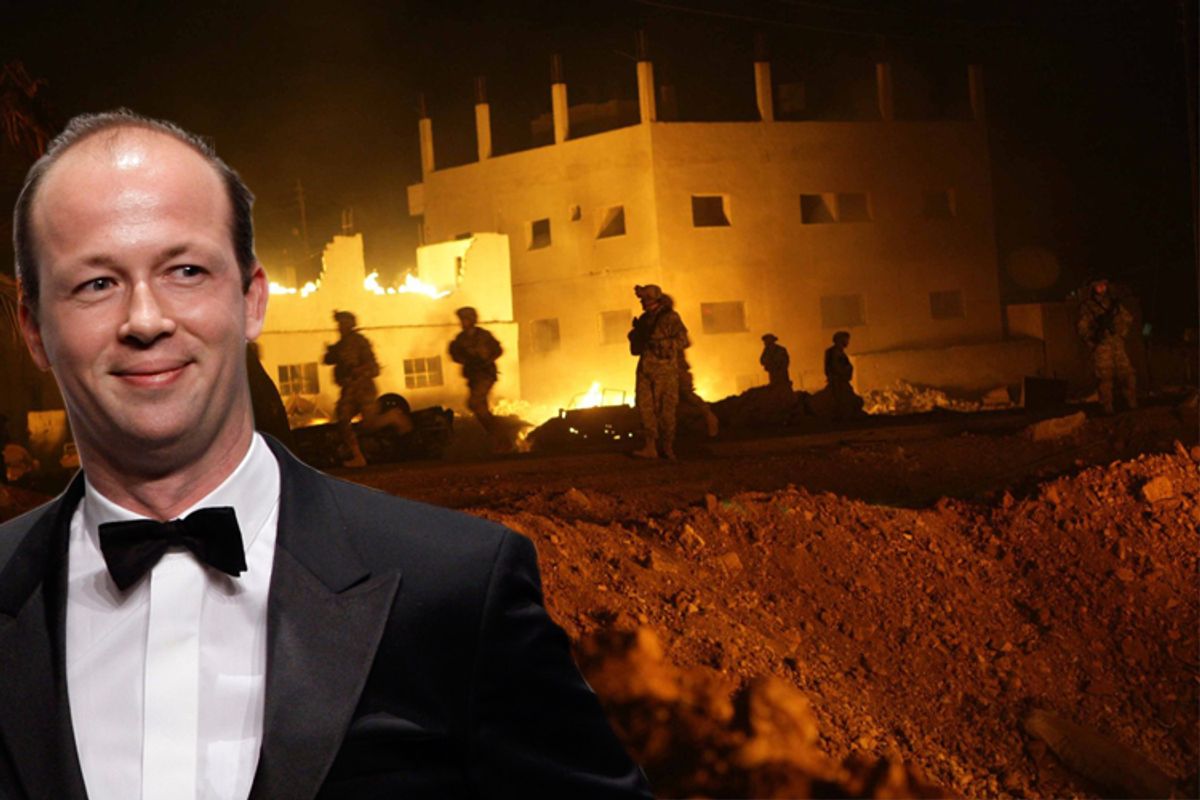 Nicolas Chartier, one of the producers of "The Hurt Locker."
--

Oscar controversy! Oscar controversy! The Academy of Motion Picture Arts and Sciences has banned Nicolas Chartier, a producer of "The Hurt Locker" (which is nominated for best picture and several other awards) from attending the most prestigious fête in Hollywood. According to reports, "the move came after Mr. Chartier was found to have sent a message via e-mail in mid-February to academy members urging that they vote for 'The Hurt Locker,' a low-budget Iraq war drama, rather than endorsing an ultra-high budget film that he did not identify by name, but clearly hinted was 'Avatar.'" If that seems rather mild compared to, say, your average city council campaign -- let alone national politics -- it is. But Academy rules specifically prohibit Oscar campaigners from projecting "a negative or derogatory light on a competing film or achievement."

In other bad news for Kathryn Bigelow's film about a bomb disposal expert -- which remains the presumptive favorite at this writing -- a real-life bomb disposal expert is suing the film. Master Sgt. Jeffrey Sarver, an Iraq war veteran, claims he deserves some "financial participation in the film," after writer Mark Boal immersed himself with Sarver and his unit during their time in combat. Boal's time in Iraq produced a feature article for Playboy, which in turn became the basis for his "Hurt Locker" script, although he has consistently said the film's characters are fictional. (Disclosure: Boal has also written for Salon, although not in recent years.)

Sarver argues that since the film is about him, he has rights to a portion of the profits, but in the Los Angeles Times, Boal defends his position: "There are similarities, because you'd find similarities to events that happened to lots of these guys. But the screenplay is not about him. I talked to easily over 100 soldiers during my research and reshuffled everything I learned in a way that would be authentic, but would also make for a dramatic story." Boal goes on to say he "didn't know there was a problem until recently, when the lawyers got involved."

An insider source claims that an Oscar skit involving Ben Stiller, a botched translation and a blue-skinned Sacha Baron Cohen dressed as a female Na'vi, pregnant with James Cameron's love child, followed by a Jerry-Springer type confrontation with the father, has been cut. Why? Because "producers think that Cameron is so thin-skinned he could literally walk out of the ceremony."

To interrupt the Oscar-heavy news with festival news for a moment, the upcoming South by Southwest Film Festival in Austin, Texas, has just announced it will host the premiere of producer Robert Rodriguez and director Nimród Antal's "Predators." This reboot of the action-monster franchise stars Oscar-winner Adrien Brody, along with Topher Grace, Alice Braga and Laurence Fishburne. In April, New York's Tribeca Film Festival will introduce its long-awaited move into theatrical and cable-TV distribution. TFF will be launching both Tribeca Film, a new venture that will distribute seven to 10 films a year in theatrical venues and via video-on-demand, and Tribeca Film Festival Virtual, which will screen a number of TFF features online simultaneous with their festival premieres (or "day-and-date," to use industry lingo).

With all the attention the Oscars garner, studios are trying to match eyeballs with movie posters -- even if it requires breaking the law. In Los Angeles, a building owner went to jail on $1 million bail for illegally mounting an eight-story billboard for DreamWorks' "How to Train Your Dragon." Apparently, the film distributor, Paramount, "won't be held accountable." This doesn't make the activists happy: "I would say 70-80 percent of the ads on illegal billboards in Los Angeles are for movies and TV shows. In fact, it might even be higher than that," said Dennis Hathaway, president of the Coalition to Ban the Billboard Blight.

"If 'The Hurt Locker' wins the Oscar for best picture Sunday night -- and at this stage, the race is really down to either 'Avatar' or the Kathryn Bigelow-directed film about bomb disposal experts in Iraq," writes Patrick Goldstein in an excellent article about the tenuous relationship between the Oscars and movies about war, "it will be the first war film to earn the academy's top honor in nearly 25 years. In the past 40 years, only three bona fide war films have won the top Oscar -- 1970's 'Patton,' 1978's 'The Deer Hunter' and 1986's 'Platoon.'"

If you're a Lewis Carroll buff, or a film history aficionado, check out Stephen Salto's fascinating IFC.com blog entry on the various incarnations of "Alice in Wonderland" leading up to the Tim Burton-Johnny Depp 3-D version. It features six video clips, including an excerpt  from a British silent version made in 1903 (!) and another from Bill Osco's 1976 soft-porn rendition, which stars a Playboy cover girl and emphasizes the tag line, "the world's favorite bedtime story ... that's finally a bedtime story."

James Cameron is planning to rerelease "Titanic" in 2011, except this time in 3-D. On Moving Image Source, film archivist and curator Leah Churner offers another historical treatise, this one exploring the allure of watching this great ship sink over and over again throughout the 20th century. Only one video clip -- but plenty of footnotes! "The first movie dramatization of the event, 'Saved From the Titanic,' premiered a month after the collision with the iceberg, on May 14, 1912," Churner writes. Not only that, the film starred an actual Titanic survivor, Dorothy Gibson, "an actress with the Eclair Moving Picture Company of Fort Lee, New Jersey." Gibson played herself, wearing the same dress she wore on the night of the disaster. Can you imagine a 9/11 movie released on 9/25?

Have you ever longed to see your favorite movies again, but for the first time? Cinematical ponders this hypothetical question. If your instant reaction is "No," take a look at these rare photos from the original "Star Wars" series, and see if you can't contain a bit of nostalgia.

In movie-development gossip, reports abound about "Zoolander 2," "Gilligan's Island," "Indiana Jones 5," "Space Invaders" -- based on the vintage video game, of course -- and a film based on the just-published novel "Abraham Lincoln: Vampire Hunter."

Charts can be nerdy, but fun at the same time. Click here to see a list of movie graphs and infographics, including "The Best Movies of All Time Map," which resembles a map for the London tube.

Since data always presents itself as having all the answers, we'll end with some questions:

Has Hollywood started giving more and more of the plot away in trailers?

If Wes Anderson directed the "Spider-man" reboot, would it look like this?