Tabloids foam over the famous tot's attire, showing just how eager we are to narrowly define sex roles 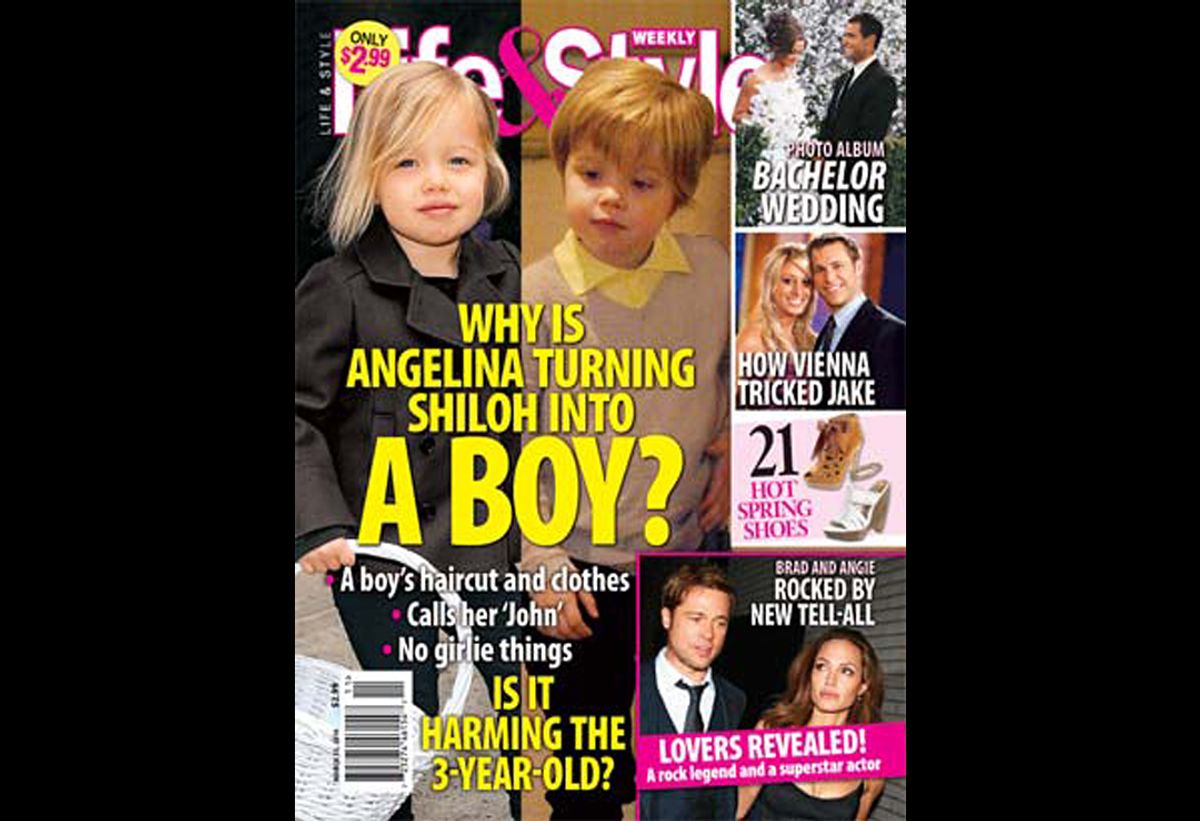 Have you heard about the terrible things Angelina Jolie and Brad Pitt have been doing to their daughter Shiloh? The horrifying odyssey began this winter, when paparazzi snapped photos of the preschooler in Paris sporting jeans, a pullover, and -- zut alors! -- a short, breezy haircut.

Ever since, the tabloids have been stewing with concern for the child, reaching a pitch yesterday when Life & Style published a cover story that agonized, "Why is Angelina turning Shiloh into a BOY? Is it harming the 3-year-old?"

The story goes on to quote such authorities as a stylist for VH1 who decrees that "Shiloh is pushing the boundaries of a tomboy look and crossing over to cross-dresser territory," and a representative from Focus on the Family who says, "Little girls have never been women before. They need help; they need guidance of what that looks like. It's important to teach our children that gender distinction is very healthy." Getting fashion advice from Focus on the Family: About as wise as getting marital advice from Alec Baldwin.

On the Hollywood Life blog, meanwhile, the ever-hyperventilating tabloid guru Bonnie Fuller asked recently, "So Brad and so Angelina -- what’s up with the cross-gender dressing for Shiloh? Did YOU both want another boy, not a girl? Maddox and Pax weren’t enough? Aren’t you worried that you’re going to confuse little Shiloh? Give her gender identity issues? Isn’t it hard enough to grow up without your parents dressing you like the opposite sex?" Yes, Shiloh, your parents are MONSTERS.

The New York Daily News took a somewhat more restrained view of the issue, noting yesterday that Shiloh's "ultra-boyish attire" is only a problem if, according to psychologist Lisa Rene Reynolds, "they are trying to bend gender roles in order to be politically correct," since "that could lead to self-esteem issues and role and gender confusion later on."

It's easy to laugh at all the furor over one little girl's hair -- and believe me, I do, heartily -- but the hand-wringing over Shiloh says a hell of a lot about how eager we are to narrowly define sex roles, and how easy it is to incite outrage when we transgress in the slightest. Shiloh, that poor girl, may not be the über fashionista that Suri Cruise is, but guess what? Go to a playground sometime, and see how well you fare identifying the gender of any little kid who isn't in a fairy costume or a football jersey. Oh, to have a dollar for every parent who's put a foot in the mouth over some cherub in a snowsuit.

Which leads to the question -- who, by the way, decided that short hair and pants were the exclusive domain of boys? Keira Knightley, Natalie Portman, Halle Berry, Victoria Beckman and, uh, every other woman who's ever cut her hair are going to be pissed when they hear about this.  Likewise, say what you will about parents who force a gender-neutral identity on their kids, but it's pretty ridiculous to go straight to j'accuse! town every time a tyke isn't all decked out in extreme parodies of femininity -- or, for that matter, masculinity. You think all the ink given to Shiloh is crazy? Ever seen what happens when a boy dares to flout convention and wear long hair? The outrage!

Mostly, though, I have to wonder if any of the critics of Shiloh's casual look have any firsthand experience with the daily nightmare that is little girl hair. The tears! The snarls! The DRAMA. If I had as many kids as Angelina Jolie does, they'd be getting military-grade buzz cuts every week. Short hair isn't always a way of subverting the patriarchy; it isn't even just a cute fashion statement. When you've got children, it's practical as hell. Less hair equals less places for gum to get stuck. I have two daughters myself, both of whom I kept in pixie-ish styles for as long as they would stand it. The elder is now a superfemme who wears tutus to school; the younger has a strictly self-imposed uniform of tight ponytails and jeans. Because, duh, they may be girls, but they're also individuals. And though we parents -- whether we're tabloid superstars or regular slobs -- are buying our children's outfits and helping them button their sweaters, our kids are the ones who need the freedom to figure out who they are.

Identity is a lot more complicated than hair length or wardrobe color. You can't be comfortable in your own skin if you're not comfortable in your own clothes. Shiloh may not yet be be able to tie her shoes, but from the looks of things, she's already figured that much out. Which puts her light years ahead of a whole lot of her critics.