The director plays his best cards: Visual splendor, darkness, Johnny Depp. But has he fallen down a rabbit hole? 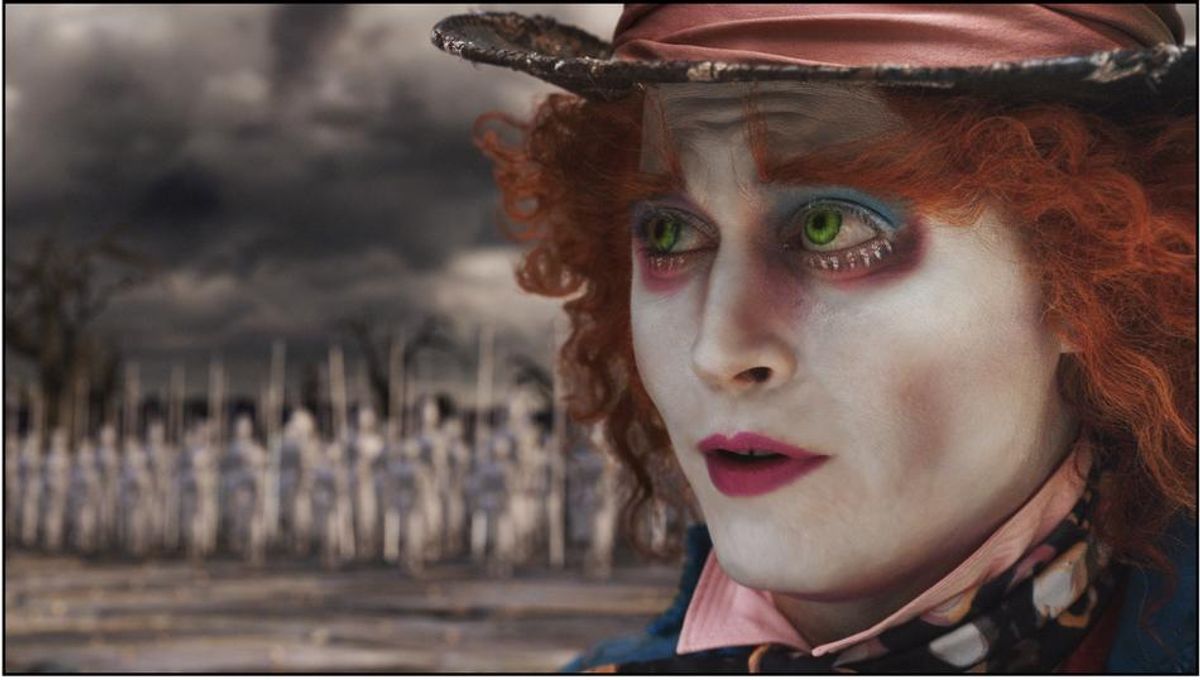 It's disappointing enough that a movie whose title contains the word "wonder" should hold so little of it. It's even more disheartening that that movie should come from Tim Burton, a filmmaker whose imaginativeness -- working in tandem with his dark heart - - has given moviegoers so much pleasure over the years that even at the relatively tender age of 51, he's earned his own Museum of Modern Art retrospective. "Alice in Wonderland" is hardly a total disappointment: Burton has put the expected level of care into its production and character design, and the picture is a far more low-key affair than either of his last two live-action films, "Sweeney Todd, the Demon Barber of Fleet Street" and "Charlie and the Chocolate Factory." Unlike the former, "Alice" doesn't groan under the weight of thunderous pretentiousness, and unlike the latter, its garishness is, at least, of the muted sort.

But I found myself trying so hard to like "Alice in Wonderland" that the process of watching it exhausted me. Burton, working from a screenplay by Linda Woolverton, isn't even attempting a faithful adaptation of Lewis Carroll, and that's probably a wise move. Carroll's "Alice's Adventures in Wonderland" -- coupled with its sequel, "Through the Looking-Glass" -- is a marvel of dream-logic storytelling, a perfect articulation of the way our minds reinvent the rules of life during sleep: Carroll -- or the Rev. Charles Lutwidge Dodgson, if you prefer -- understood how a conversation with a rabbit in a waistcoat can be a matter of life and death while you're dreaming it and seem like a silly, dismissible trifle once you're up and awake. Carroll's books have a beautiful structure, but a movie needs more narrative drive, and Burton and Woolverton seem to know that. They've framed their story as a sort-of sequel, in which Alice (played by the ethereal-looking Mia Wasikowska) is now grown-up enough to be betrothed, and she needs to make a good match owing to her family's constrained financial situation. The problem is, she doesn't much like the husband who's been chosen for her. And so, when the prospective groom puts her on the spot by asking publicly for her hand in marriage, she slips away from the gawking crowd and escapes -- from him and from the responsibilities of adulthood -- by tumbling into a rabbit hole.

In Burton's vision, that world isn't "Wonderland," but "Underland," a mildly witty play on words that makes sense in the context of his reimagining of the story (though, apparently, when you're making a movie for the Walt Disney Co., it would be messing too much with tradition to call it "Alice in Underland"). In that world, Alice meets the cast of characters so familiar from Carroll's book, although they generally serve different purposes here. Johnny Depp's Mad Hatter is a sensitive, wild-eyed, gap-toothed scatterbrain who hasn't been the same since the benevolent yet frightening-looking White Queen (Anne Hathaway) was dethroned by her power-mad and very big-headed (literally and figuratively) sister, the Red Queen (Helena Bonham Carter). The Red Queen rules her kingdom with a tiny iron fist: Her chief henchman is Stayne, Knave of Hearts (Crispin Glover, borrowing a page from Laurence Olivier's film version of Richard III, a spindly, black-clad figure with a charred, corrupted soul). The Red Queen takes pleasure in cutting off people's heads, willy-nilly; she likes to rest her feet on the backs of fat, ottoman-shaped pigs. In short, she's not a very nice person at all.

Alice, who is alternately too big or too small depending on what she's most recently had to eat or drink, moves through this strange world -- one in which giant, jewel-toned toadstools sport furry spots and, curiouser and curiouser, hookah-puffing caterpillars sound just like Alan Rickman -- with a mixture of trepidation and sure-footedness. She's been transported to Underland for a reason, and although she doesn't yet know what that is, we of course can see it coming a mile away.

Foreseeing the ending of a story isn't necessarily a problem; particularly in fairy tales, getting there is supposed to be most of the fun. But the problem with Burton's "Alice in Wonderland" is that it's all production design and no storytelling. There's no compelling thread to follow here. Burton doesn't build a universe in which we have any real reason to fear some characters and to feel protective of others. There's nothing at stake in this Wonderland/Underland: When the action gets droopy, Burton cuts back to the Red Queen's castle, where we get to watch her toddling about and spewing her highly amusing self-important twaddle. (Her silliest riffs are spun from the fact that she herself knows her head is enormous, and so what of it?) The Red Queen, as Carter plays her -- her head has been enlarged and glued, via CGI, onto a twig-size body -- is the most entertaining character here, and her makeup alone is both fascinating and repellent: Her lips have been painted into a tiny heart-shaped pout; her eyelids are coated with a magnificent color I can describe only as old-lady Maybelline blue.

But this tiny prima donna isn't enough to carry a movie, and so Burton has to come up with activities to occupy the other characters. Depp, in particular, gets lost in the shuffle. The Mad Hatter, as Burton has reimagined him here, with a matted puff of red hair and perpetually dilated crazy-ass eyes, is something of a lost soul, the very type of character that Depp is generally so wonderful at playing. But it's hard to see anything genuinely moving behind his tics and mannerisms. Even though Burton and Depp have done some wonderful work together -- in movies like "Edward Scissorhands" and "Sleepy Hollow" -- it's gotten to the point where I prefer to see Depp in performances where he's not hidden under "Look at me!" makeup. There's a point at which perpetual collaboration between a filmmaker and an actor becomes a liability, and Depp and Burton may have reached it, at least for now.

"Alice in Wonderland" does offer its share of slender pleasures: Wasikowska plays Alice as bright and unassuming, and watching her is never a chore, even when the story devolves into a "Girls can do cool stuff, too!" empowerment tale. And the sequence in which she takes her first swig from that little bottle marked "Drink me!" -- followed by her nibbling on that adorable "Eat me!" petit four -- is ingeniously designed and staged, taking place in a warped-perspective room that appears to be all corners. Alice's costuming here is particularly clever: She's dressed in a billowy, translucent blue gown that she can both shrink out of and grow into. I also loved looking at, and listening to, the Cheshire Cat (voiced by Stephen Fry), a creature whose iridescent teal-blue stripes have been carefully coordinated with his enormous, glowing eyes.

But as lavish-looking as this "Alice in Wonderland" is, it still feels cobbled together, albeit painstakingly. It's not at all shallow to care about the look of a film. Visual seduction is part of the reason we go to the movies. But maybe Burton is working too hard at being visually impressive: In the end, "Alice in Wonderland" comes off as manufactured instead of dreamy. Burton delivers all the wonder money can buy; what's missing is the wonder it can't.