The French president's hot wife may or may not have gone braless, but either way, I weep for humanity 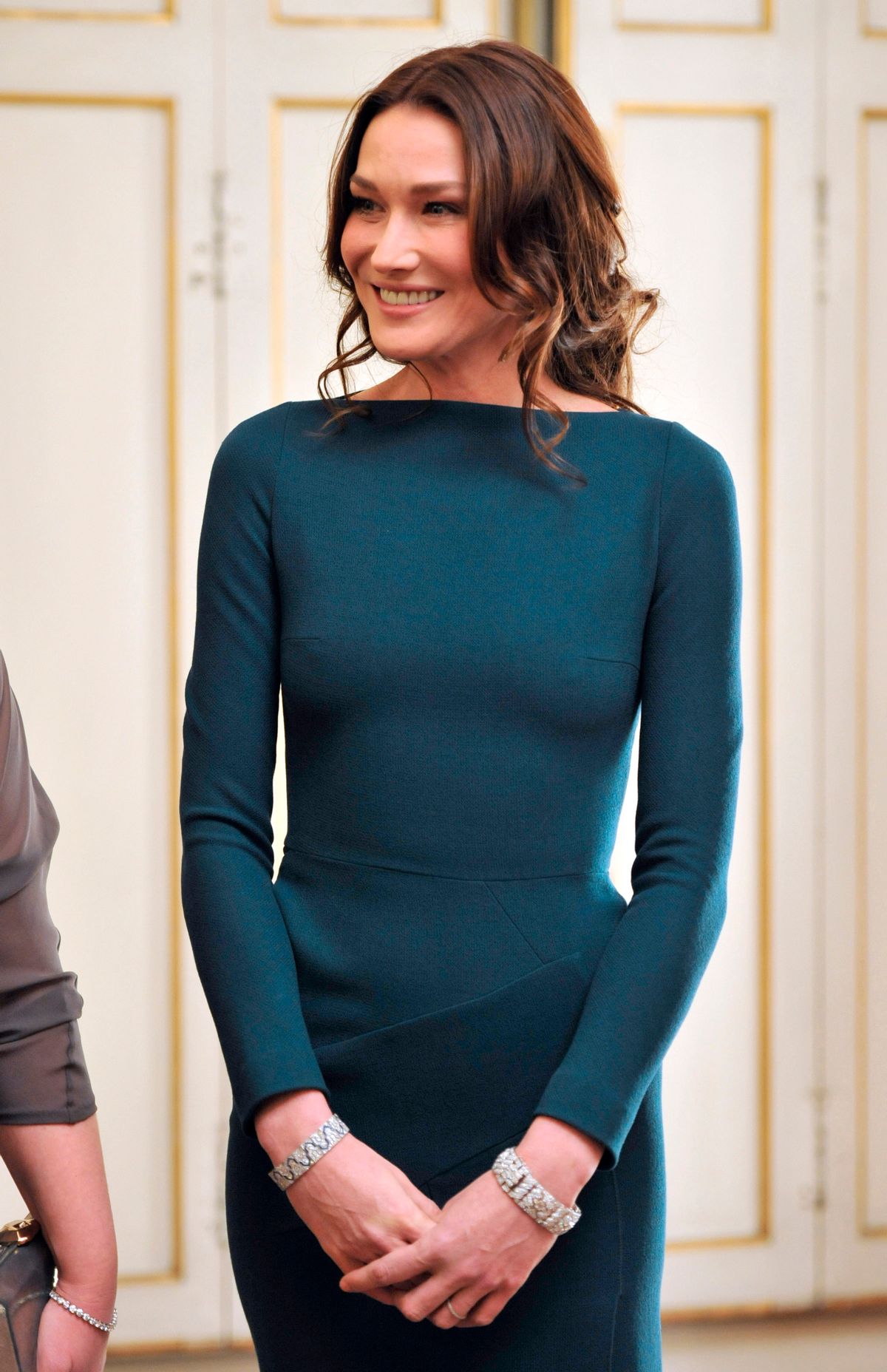 French first lady Carla Bruni's body has long been a subject of interest to many, but the Times of London has taken scrutiny of the former model's rack to a whole new level. Based on photos of Bruni in a form-fitting but full-coverage Roland Mouret gown at a state dinner on Tuesday night, Times writers Hannah Betts and Sarah Vine have A) determined that she is not wearing a bra and B) offered a helpful point-counterpoint on whether she should be slut-shamed for it.

Before I get into their arguments, I'd like to state for the record that unless that dress is totally backless, I'm not convinced Bruni isn't wearing a bra. Yes, in at least one shot, you can see her nipples, hence controversy -- but that only tells us conclusively that she is not wearing a very thick bra. In fact, I would argue that if you quit staring at her nips and look up, you can see the outline of some kind of straps; perhaps it's only a slip, but it's something that in my opinion renders the whole argument moot. (I know, common sense and journalistic integrity ought to render the whole argument moot, but that ship has sailed.) In any case, she's well covered and certainly not screamingly unsupported; if they'd cranked the heat a couple of degrees higher, there would be no issue here.

But without the fake issue, we'd never have gotten Betts' florid and slightly bonkers defense of going commando, which would be a damned shame.

Our culture is obsessed with heaving, blancmangey cleavage, but the erect nipple is a far more potent yet insouciant sexual signifier. The pert pap winningly protrudes between the sluttish and the demure: contained arousal, clothed incitement; an invitation more beguiling for being a whisper rather than a shout.

LOLwhut? I mean, whatever, fine point about the erotic mystery of the covered nipple, but I think it's possible that Betts is overthinking this one. I can't quite picture Carla in her dressing room, all, "Well, I could go for straight-up bare boobies at this state dinner I'm hosting, but I'm feeling something more ... potent yet insouciant." And that's sort of the whole problem here. Betts' premise is that Bruni made a conscious decision to draw attention to her "embonpoint as a means of signalling youthfulness and a provocatively literal grip on power." But as someone who once gave a reading at an outdoor wedding in a dress that looked fine inside but turned out to be scandalously see-through in broad daylight, I'm rather less inclined to assume Bruni deliberately set out to share her nipples with the crowd. Accidents happen.

Vine, meanwhile, doesn't even mention Bruni's name in her position statement. Ostensibly representing the "Yes, it was a boob" viewpoint, she pretty much just muses on why she likes wearing bras, making her side officially a non-argument about a non-controversy. Which, while not as amusing as Betts' approach ("when Carla brandishes her bosom, she is merely the latest in an august line of Gallic consorts who have proffered their breasts to suggest physical and political prowess ...") is sort of awesome in its own way. "Bras: I'm for 'em! Can I have my money now?"

As for me: I'm for 'em -- but I also really don't care if anyone else is, even the French president's hot wife. What I do care about is how women in the public eye are endlessly monitored to see if they've put a toe (or nipple) over the line of acceptable sexuality -- a transgression matched in manufactured outrage only by their failures to be feminine enough. (I weep for the day Shiloh Jolie-Pitt hits puberty.) And as long as a woman wearing a boatneck, long-sleeved, full-length gown with sensible low heels can be cast as trampy and inappropriate because she got photographed in unfortunate lighting and/or a drafty room -- as long as the line highly visible females are expected to walk is that freakin' fine -- I really don't want to hear one more word about how sexism has nothing to do with the lack of women in positions of real power.