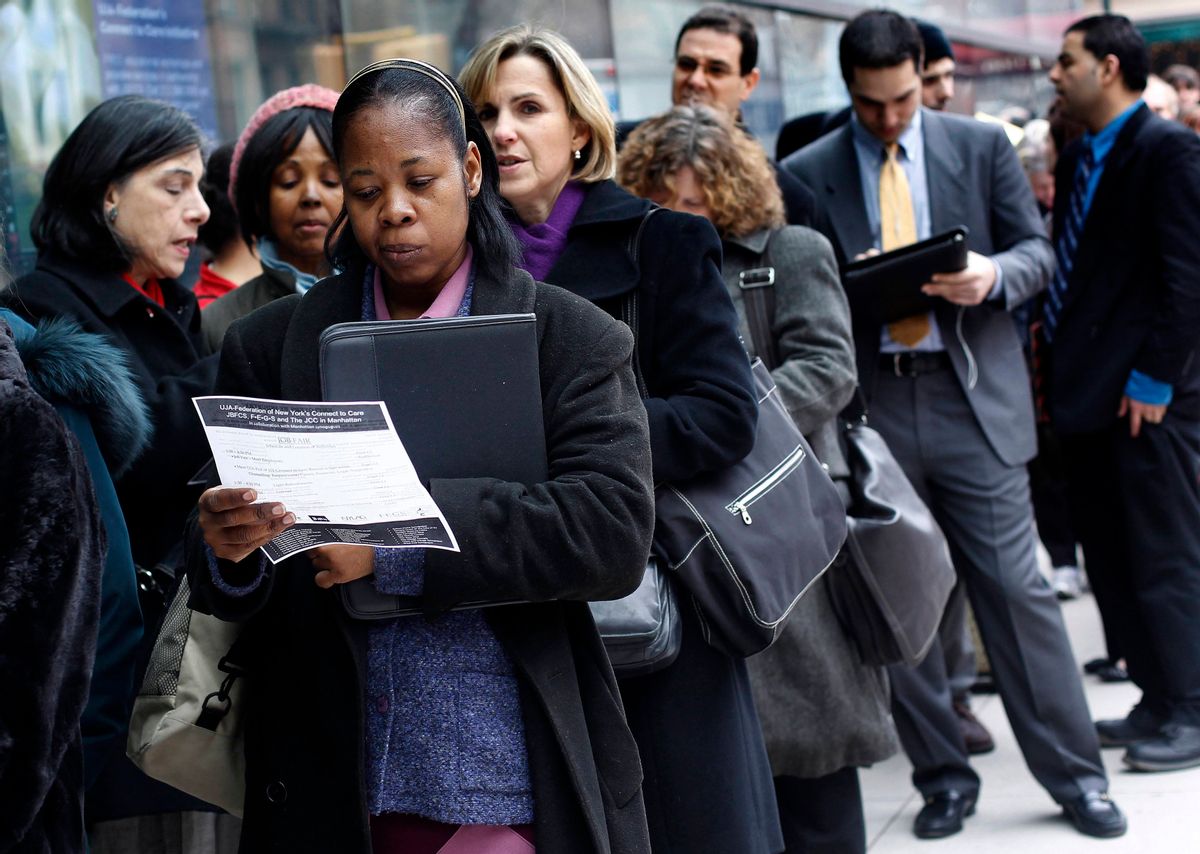 People wait in line to enter the UJA-Federation of New York's Connect to Care job fair in New York, in this file image from March 2, 2010. The number of people working in the United States likely fell in February as winter storms that pounded parts of the country kept some workers at home but a swift recovery is expected in March. A government report on March 6, 2010 is forecast to show payrolls dropped 50,000 after slipping 20,000 in January, according to a Reuters poll of economists. Picture taken March 2, 2010. REUTERS/Shannon Stapleton/Files (UNITED STATES - Tags: EMPLOYMENT BUSINESS) (Reuters)
--

The loss of 36,000 jobs in February is better than expected but it’s still miserable (26,000 were lost in January, according to the government’s revised figures), and it complicates the president’s final push for healthcare reform.

(And don’t blame it mostly on the weather. Although the surveys on which the report is based were done in mid-February, during winter snowstorms in the East, the major impact of bad weather was on hours worked, not the numbers of jobs. If you had a job in February but were snowed in, the Bureau of Labor Statistics reported you as having a job.)

With employers still shedding jobs and consumer confidence down, Americans are worried first and foremost about paying their bills. Because most people aren't aware how much of their paychecks are being eaten up by rising healthcare costs but can easily be persuaded they’ll be paying more to cover those who don’t have health insurance under any new health plan, the continuing bad news on the jobs front makes it harder for the president to make his healthcare sale.

The bad news on jobs also allows economic illiterates (and scoundrels who know better) to continue to claim the stimulus is failing and what’s needed is less government rather than more, including not only a smaller "jobs bill" but less or no healthcare reform.

In politics as in economics and love, timing is everything. Obama can’t wait much longer if he wants to convince waivering and worried conservative Democrats to join him in a last-ditch 51-vote reconciliation measure to get healthcare through the Senate. We’re already in the gravititational pull of November’s midterm elections. But the economy is taking a longer time to turn around than anyone expected, and telling Americans the jobs numbers are getting worse more slowly isn’t exactly reassuring.

One small political consolation is the worst job numbers continue to be on the coasts and the old Rust Belt where Dems are relatively safer, and the best numbers in the Midwest and mountain states and South where Dems are weakest. So at least blue-dog Dems who are under the most pressure from their conservative constituents on healthcare aren’t grappling with the biggest job losses.

Another is that all across the nation, the people being hit worst by this continuing jobs recession/depression are the poor and lower middle class whom Republicans are trying to court. They’re in greatest danger of losing healthcare coverage if they haven’t lost it already, and in greatest need for subsidies to allow them and their families to afford it. Waivering and worried congressional Dems should be reaching out to them.

Americans desperately need healthcare reform. They also desperately need jobs. Even if it’s difficult for many to make the connection, it’s still possible for the nation to try to do two important things at the same time. We need a big jobs bill -- including especially extended unemployment insurance, aid to hard-hit states and cities -- and we need healthcare reform. The sooner we do the former and get the economy moving into positive job numbers again, the more quickly and easily we can afford the latter. The big question is whether the president can make the case.