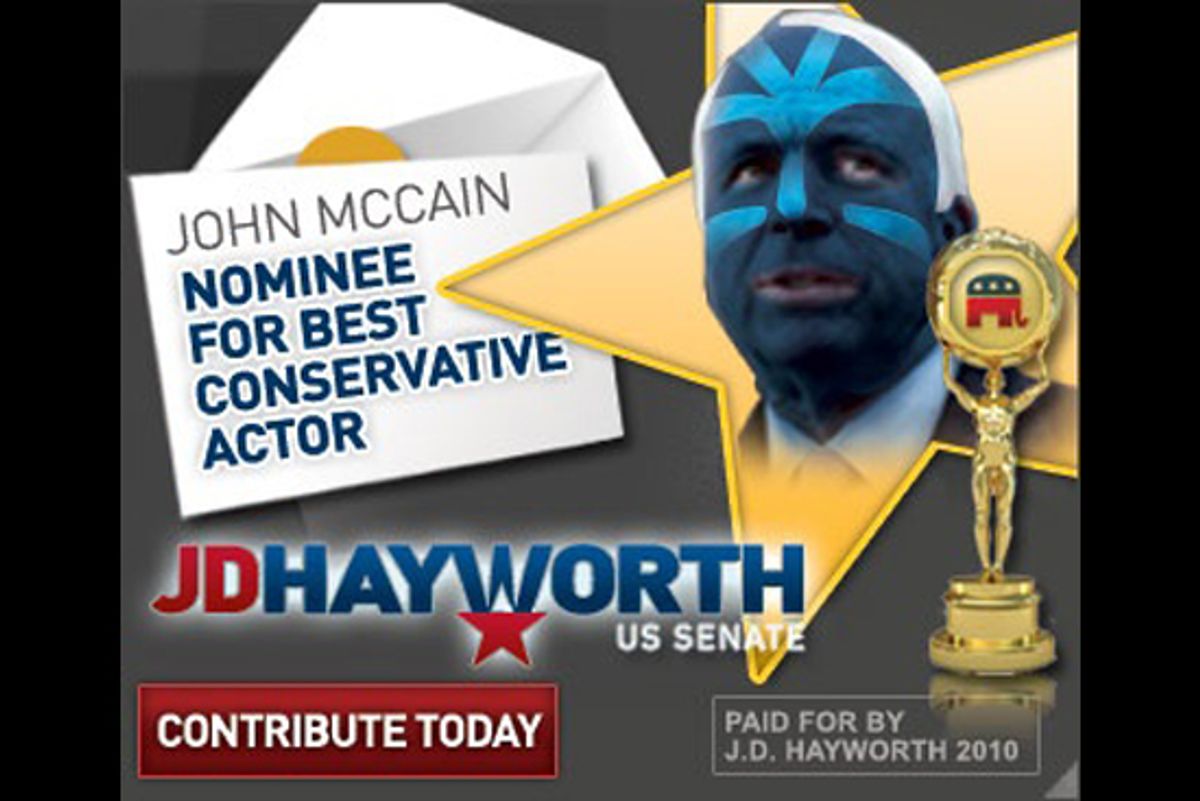 It's pretty early into the Republican primary campaign between Sen. John McCain and former Arizona Rep. J.D. Hayworth. But two things are already clear: McCain and his staff don't like Hayworth much -- and Hayworth may well spend the rest of the campaign trying to poke McCain in the eye politically, just to provoke a reaction.

On Thursday afternoon, McCain aides blasted out a press release that at first seemed a little cryptic. The text:

"Ads like this have no place in the Republican primary, and J.D. Hayworth should immediately take it down and apologize." -- Senate Republican Whip Jon Kyl

Helpfully, McCain's campaign included a link to the ad, which had, indeed, been running on the top of the Drudge Report for about an hour. It features McCain, painted to look like a Navi'i warrior, from the movie "Avatar." (Get it? Because the Oscars are coming up, and McCain is up for "best conservative actor" in the ad?) If they hadn't done that, of course, it's not clear anyone would have ever seen the image that got Kyl so worked up; I hadn't, until I got the press release in my e-mail, and within about 10 minutes, it had been replaced on Drudge with a Netflix promo.

Not long afterwards, McCain aides sent out another statement, from campaign manager Shiree Verdone. "Ex-Congressman J.D. Hayworth should immediately apologize and and take down his latest online ad, which is an outrageous offense to John McCain’s lifetime of honorable service to our state and nation, and insulting to Native Americans here in Arizona and across America," Verdone said. "Mr. Hayworth is welcome to debate the challenges facing our state and nation, but this kind of character assassination has no place in the Republican Party, and Mr. Hayworth should ashamed of his campaign for running it."

To be fair, Hayworth's camp says there were two versions of the ad -- one, in which McCain's face was tinted blue, made it a little more clear that he was supposed to be an "Avatar" character, while the one the McCain campaign linked to just looked like he had paint on his face. McCain spokesman Brian Rogers brushed off a question about the movie reference. "Whatever it is, it's insulting!" he e-mailed.

Here's the original version (the all-blue version is at the top of the story): At any rate, the volume of the response showed how eager McCain's team is to crush Hayworth. The two men didn't like each other much when Hayworth served in the House (and constantly needled McCain over immigration, back when McCain supported reforming the nation's immigration laws), and they don't seem to like each other much in the campaign (in which Hayworth is... constantly needling McCain over immigration). Considering Hayworth trailed by more than 20 points in a poll in January, McCain may be sending him more attention than he needs to at the moment by highlighting the ad.

Meanwhile, Hayworth advisor Jason Rose said the ad was "moving the needle" on fundraising. But in the first hour it was up on Drudge, Rose tells Salon, it brought in about $3,000. Sure, that's only an hour, and McCain may well have helped promote the ad. But at that kind of fundraising pace, Hayworth should be competitive financially with McCain by 2015 -- maybe 2014 if he really steps it up.