The WP: Obama close to reversing Holder on civilian trials 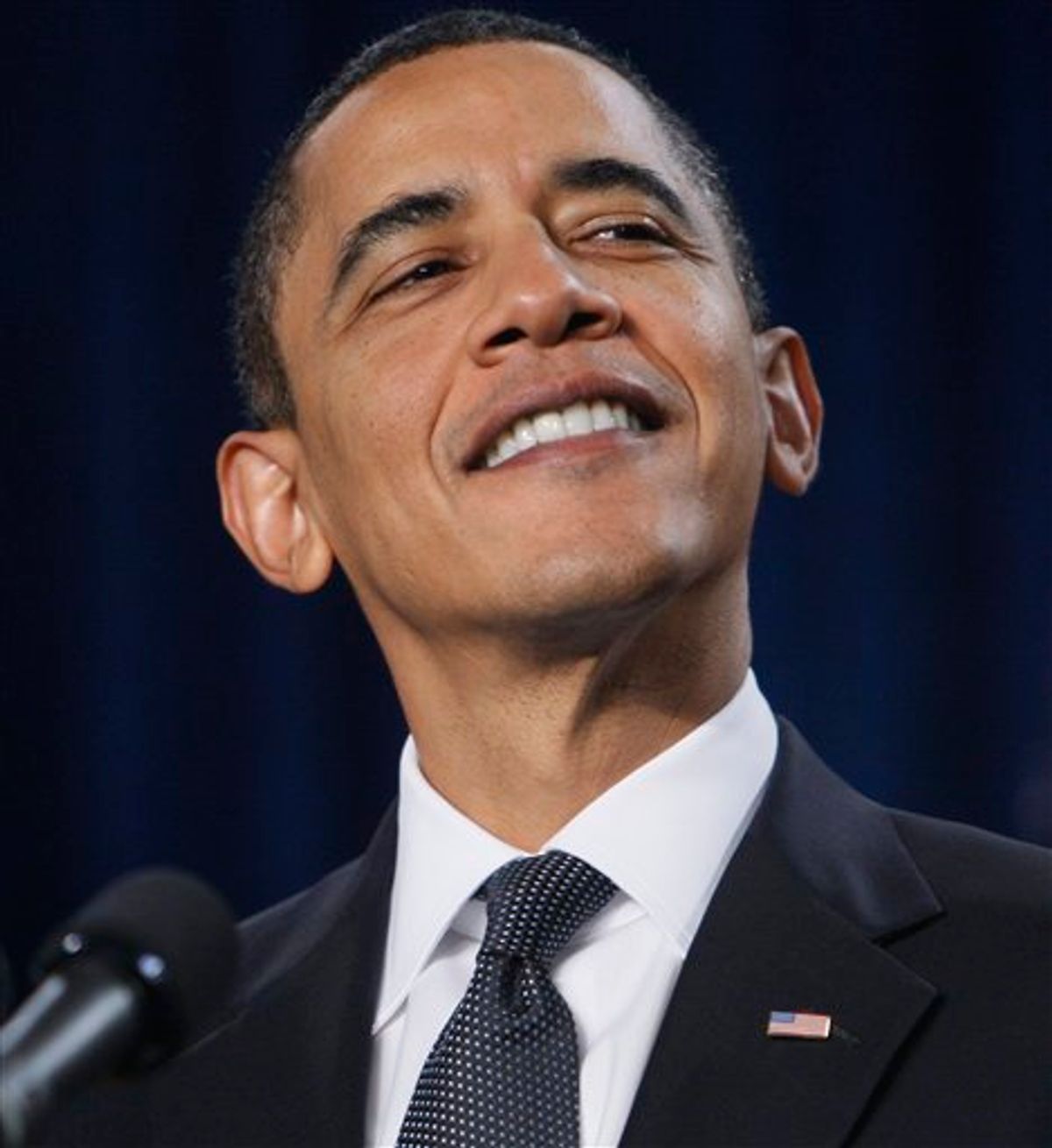 One of the very few commendable steps taken by the Obama administration toward reversing the Bush/Cheney Constitution/Terrorism template was the DOJ's decision to try the five accused 9/11 defendants in a civilian court (just as the rest of the civilized world does with Terrorists).  But ever since that was announced, Obama officials have been clearly signaling that they intend to reverse that decision in response to the GOP's political attacks (while Rahm Emanuel has been busy making clear he disagreed with Holder's choice), and a new story in The Washington Post this morning provides the clearest evidence yet that this will happen.  The article reports that "President Obama's advisers are nearing a recommendation that Khalid Sheik Mohammed, the self-proclaimed mastermind of the Sept. 11, 2001, attacks, be prosecuted in a military tribunal . . . a step that would reverse Attorney General Eric H. Holder Jr.'s plan to try him in civilian court."  This reversal will be due to "demands, mainly from Republicans, that Mohammed and his accused co-conspirators remain under military jurisdiction."

I obviously don't know whether this will in fact happen, but because these signals have come both from Eric Holder on the record and what are clearly coordinated, authorized anonymous White House "leaks," it seems quite likely.  Without assuming that this is a fait accompli, I want to make several points about what it would mean if Obama does reverse Holder's decision and puts the five 9/11 defendants before a military commission:

First, although they will try, it will be extremely difficult even for his most devoted loyalists to deny the fundamental cowardice of Barack Obama.  Think about how many times this will have happened:

During the primary campaign, Obama unequivocally vowed to filibuster any FISA bill that contained telecom immunity, only to turn around -- once the nomination was secure -- and vote against a Democratic filibuster of such a bill, and then in favor of the underlying bill itself; in other words, he blatantly violated his own unequivocal vow in order to avoid being called Soft on Terror (but did so assuring his believing supporters that, once in office, he'd fix the surveilllance excesses he helped enact; don't hold your breath waiting for that to happen).  Then, last May, Obama announced that he would comply with two court decisions by releasing photographs of detainee abuses in the Pentagon's custody, only to turn around two weeks later and completely reverse himself after Liz Cheney and friends accused him of Endangering the Troops and Helping Terrorists.  If, in the face of "GOP demands" that Mohamed be denied a civilian trial, he again reverses himself -- this time on the highest-profile civil liberties decision of his administration -- he will unmistakably reveal himself, even to his most enamored admirers, as someone so utterly devoid not only of principle but also of resolve:  you just blow on him a little and he falls down and shatters into little pieces.

Even just as a political matter, is there any better way to ensure that Americans will view him as weak than by abandoning one key decision after the next as a result of the slightest pressure?  What kind of person could possibly admire a "leader" who does this?

Second, Obama supporters spent months vigorously defending the decision to try KSM in a civilian court on the ground that Obama was upholding the Constitution and defending the rule of law.  What are they going to say if he reverses himself and uses military commissions instead:  that he's shredding the Constitution and trampling on the rule of law?  If they have any intellectual integrity at all, that's what they will have to say.   The reality is that this praise for Obama never made any sense -- how can one claim that civilian trials are compelled by "our values" and "the rule of law" and praise Obama for following those principles when he's simultaneously denying civilian trials to most detainees? -- but since that's the argument they made to defend him, they should follow that through to its logical conclusion if he reverses Holder's decision.  Here's the only way an intellectually honest person could react to such a decision, from the Post article:

Marine Col. Jeffrey Colwell, acting chief defense counsel at the Defense Department's Office of Military Commissions, said it would be a "sad day for the rule of law" if Obama decides not to proceed with a federal trial. "I thought the decision where to put people on trial -- whether federal court or military commissions -- was based on what was right, not what is politically advantageous," Colwell said.

I thought so, too.  Of course, many hardened Obama supporters amazingly found ways to justify both his original position and his 180-degree reversals on FISA and detainee photos (pragmatism!!), but how can anyone with a working brain or a mirror possibly venerate civilian trials as compelled by the Constitution and the Rule of Law, and then refrain from harshly criticizing Obama for denying those very same civilian trials?

Third, remember all the loud, righteous Democratic complaints about how Alberto Gonzales had "politicized" the DOJ and allowed the White House to intervene for political reasons in prosecutorial decisions?  That's exactly what this would be.  They're not even trying to hide the fact that it is the White House that will intervene and reverse the prosecution decision of the Attorney General and his career prosecutors for purely political reasons.  There are no words in the English language sufficient to describe the intellectual dishonesty and hypocrisy of those who objected to Alberto Gonzales and Karl Rove's "politicization" of the DOJ yet who would refuse to voice the same complaints here.  And that's to say nothing of the glaring hypocrisy of Democrats' having spent years railing against military commissions generally, only now to turn around and embrace them.

Finally, the political excuse being offered -- that this will help secure votes to fund the closing of Guantanamo -- makes absolutely no sense for several reasons (aside from the fact that it borders on corruption to override the DOJ's decisions about prosecutions based on political horse-trading).  As The Post article makes clear, the objections to trying these defendants in a civilian court comes "mainly from Republicans," who only have 41 seats in the Senate.  If Republicans want to de-fund the closing of Guantanamo, it will be the GOP -- not the Obama White House -- which will need 60 votes to overcome a filibuster in order to enact that ban (just as Democrats needed 60 votes when they tried to impose limits on the funding of the Iraq War).  Funding decisions themselves are not subject to filibuster and require only 50 votes to pass.

The prior decision of the Senate not to fund the closing of that camp was due to the fact that Obama had not yet revealed his plan for closing it, and Senators -- understandably -- did not want to fund something that had not yet even been disclosed.  Now that Obama has announced his plan for its closing, very few Democrats have expressed opposition to it or to civilian courts.  The claim that reversing Holder's decision will help close Guantanamo is pure fiction.  And even if it were true, it raises the question nobody can answer:  what is the point of closing Guantanamo if the core Bush/Cheney/Rumsfeld system -- military commissions for some and indefinite detention for the rest -- is retained in full by Obama?

For years, Democrats have failed to grasp the fact that they are perceived as "weak" not because of any specific policies, but because they are perceived -- rightly -- to believe in nothing (or at least nothing that they claim to believe).  It is hard to imagine any act that could more strongly bolster that perception than to watch Barack Obama -- yet again -- scamper away from his own claimed principles all because the GOP is saying some mean things about him.

UPDATE:   A few related points:  first, here is Obama -- a mere two months ago -- waxing all righteous and eloquent in defending the sanctity of civilian trials for the 9/11 defendants.  Second, Lindsey Graham  -- only three months ago -- introduced an amendment to ban the funding of civilian trials for accused Terrorists, and it failed 54-45; since then, virtually no Senators have changed their position (except that Maria Cantwell, who voted FOR the Graham amendment, has since signaled she now supports civilian trials).  Whatever Obama's motives for reversing this decision (if he does), it's not because he needs to do so to secure the Senate's approval.  This is the White House's doing.   Finally, Harper's Scott Horton explains the reasons it's so inappropriate to allow the White House to interfere in DOJ prosecution decisions for political reasons.