Slash-and-burn tactics come to education. But in our race to repair broken schools, are we hurting kids? 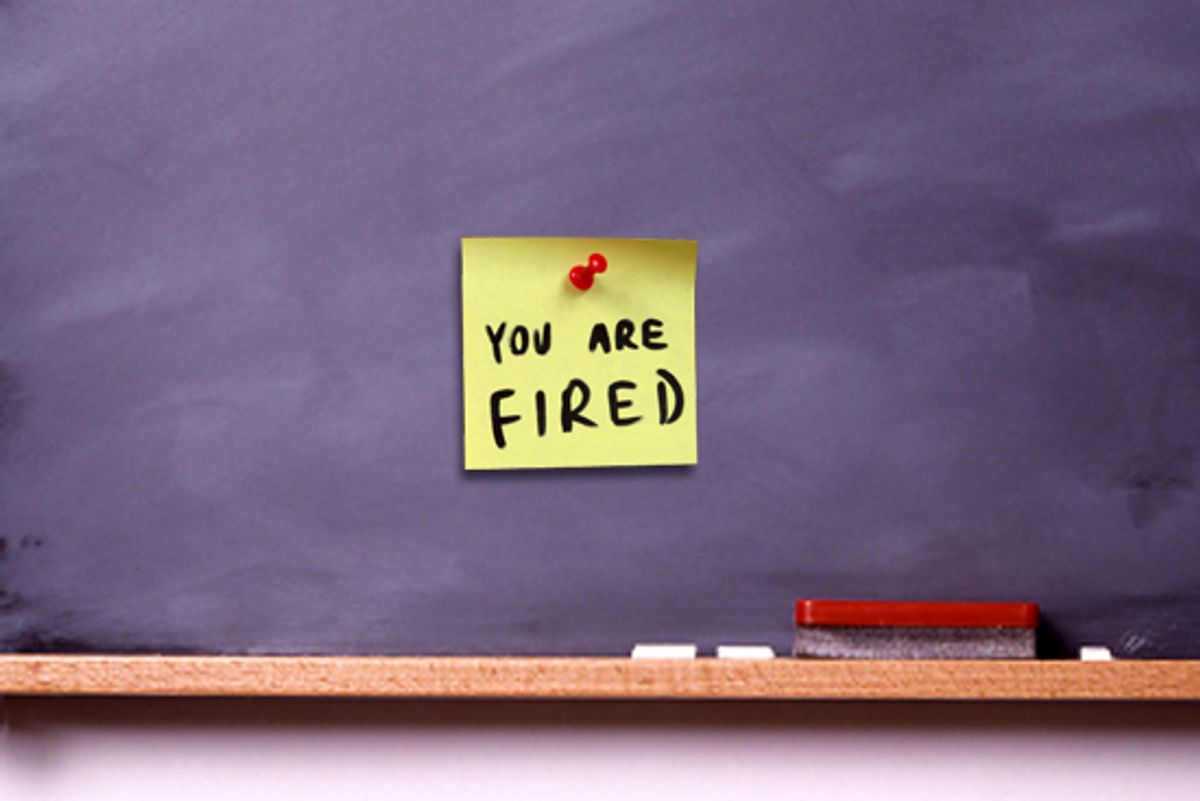 Central Falls High School in Rhode Island is one of the lowest-performing schools in one of the poorest communities in the state. It has a graduation rate of 48 percent. Only 7 percent of  its students, the majority of whom are English language learners, are at grade-level proficiency in math.

Recently the district issued an edict to its teachers: longer hours and extra training, without what their union felt was adequate compensation. When negotiations broke down, the school board fired the entire staff -- 93 people including the principal, teaching assistants and 77 teachers. As things stand now, they will finish out the year, pack up their slide rules and chalk, and get out.

In Boston, meanwhile, mere hours after the state named 12 "underperforming" schools, superintendent Carol Johnson announced that the city will fire five principals and require the entire staffs at six schools to reapply for their jobs.

As part of Barack Obama's pledge to dramatically overhaul the American education system, schools across the country have been scrambling to turn around test scores and to dash for cash as part of a "Race to the Top" incentive program. Those that don't can find themselves in similar straits as those New England: facing full-scale firings or outright closure.

Speaking Monday on his promise to invest $900 million in turning around the school system, the president laid out a variety of tough-talking strategies for failing schools, "like replacing a school's principal and at least half of its staff."

This slash and burn model has been met with wild enthusiasm in some quarters; in an editorial on CNN today, columnist Ruben Navarrette Jr. said, "The firings worked. Score one for accountability and common sense." But in the Providence Journal, Monica Teixeira de Sousa described the action as "an attack on Rhode Island’s residents themselves," saying, "It’s politically expedient and far less expensive to blame schools, blame teachers, and propose privately run charter schools as solutions."

Indeed, much blame has been laid of late directly at the feet of teachers. But who's really responsible when kids can't meet achievement goals? And whose interests are best served when educators are shown the door?  Even a cursory examination of the Rhode Island disaster neatly illuminates one of the real central issues: money. Teachers are expensive. Tenured teachers even more so. So while charter schools are bragging about how well-compensated their educators are, public schools are looking at their bottom lines.

On Monday, New York City school chancellor Joel Klein held a town meeting for my public school district, a neighborhood where 32 percent of the families live below the poverty level and where my children's own school, a Title 1 facility, received a failing grade from the Department of Education just three years ago. (With nowhere to go but up, we've since upticked to an A.) Part of Klein's presentation to an audience in a city that's had its education budget cut by 5 percent in the past year included a chart outlining the difficulty of firing tenured teachers. "The current process is ridiculous," he said.

It was a sentiment outlined clearly in a recent New York Times round table on accountability titled "Getting Rid of Bad Teachers."  Eight education experts weighed in on how to fix the review process, with a variety of suggestions including a call to "balance assessments with objective data about student learning -- and that means including standardized tests in the equation" to making schools competitive by insisting "Every single person employed in a failed educational plant, from the lunch ladies to the principal, must be removed, period." Ah, yes, it's the lunch lady's fault your kid can't read.

Yet in all the rhetoric of what to do about poor test scores and faulty learning, two crucial elements are almost entirely lacking from the dialogue – children and parents. When I say "children," by the way, I don't mean "test scores." I mean living, breathing human beings whose lives and needs and relationships don't always fit neatly on charts. You know who gets next to no say in what happens to our teachers? The families they work for. When Obama talks about accountability, he's supposed to be talking about accountability to us. Sure, the efforts to include parents and children in the conversation often prove subjective and easy to game; it just takes one kid with a grudge to bring down an entire career. But if we understand that teachers and administrators certainly have their own agendas, we can allow that parents and kids do, and still go ahead and give them a voice anyway.

How? Well, the example of New York City's School Leadership Teams  is a good starting point -- parent and staff organizations that work together on curriculum issues. Could the model be expanded to include staffing? That would involve wresting a modicum of control from the iron grip of teacher unions and the Department of Education, but it's worth a shot. Plenty of schools already have parent-administrative hiring committees. If we can be trusted to hire teachers, shouldn't there be a better process for having a say in removing them?

Let's consider what's at stake here. At my children's school, several teachers are currently under review for a variety of alleged infractions, almost all of which were brought against them by a newcomer principal working within a system whose imperative is to raise test scores and lower costs. Or, to put it another way, a newspaper reporter recently informed me that a fellow parent told him he doesn't understand why there isn't more support for administrative efforts to just "get rid of" our educators.

This is a school that follows the same progressive education model that several of the city's top private schools do -- a child-centered philosophy that doesn't espouse test taking. Our teachers don't hand out grades, they do narrative assessments and require students to draw up their own goals and work to them. As part of the fourth grade electives curriculum, the students do weekly community service that has so far this year included work in a soup kitchen and an animal shelter. It's an elementary school that has an engineering and architecture program and regularly wins awards for its young playwrights. In short, everything that makes our school vibrant and wonderful and unique -- and full of sensitive, gifted educators -- has pretty much zero to do with how our students do on standardized tests. Sucks to be us!

Is every kid in a "low-performing" school in America as lucky as mine are? No way. A friend told me recently of touring a different public school in my district, where she walked in on a teacher screaming at an out-of-control room full of kids. But for every crappy tenured teacher phoning it in right now, there are others fighting for their careers and their reputations within a system that is frankly gunning for them. As my school's parent association president put it recently, "Parents can complain about teachers, but we can't save them."

The urgency to help kids is very real. Simply bumping children up to the next grade until they're somebody else's responsibility is not acceptable. In his speech Monday, Barack Obama quoted Education Secretary Arne Duncan's imperative that "our kids get only one chance at an education, and we need to get it right." He's absolutely correct -- childhood is fleeting, and every minute our kids are not getting the education to which they're entitled is time we all wind up paying for in higher crime, lowered career prospects and overall stupidity.

Yet all the enthusiasm to revamp education has created a frenzy. Real review takes effort and collaboration. Education isn't like an episode of "Extreme Makeover." You can't know anything of the soul of a school by looking at letters and numbers on a chart. And you can't bulldoze a system and call it fixed.